Takeda Shingen (武田信玄, December 1, 1521-May 13, 1573), from the provinces of Shinano and Kai, was one of the main daimyos who fought for control of Japan during the Sengoku era.

Takeda Shingen Notes on the name

At the imperial court, he was officially and bureaucratically registered as "Minamoto no Harunobu", according to the custom of the Heian period, since the Takeda clan descended from the prestigious Minamoto clan. This article points out such name changes, but mainly uses the name Takeda Shingen to avoid confusion.

Born Takeda Katsuchiyo, he was the eldest son of Takeda Nobutora, an important warlord.

Takeda Shingen's first feat of arms - if we can call it that - is one of the most unusual, emblematic of the Sengoku era plunged into war and of a samurai tradition glorifying heroic exploits.

On November 3, 1521, the Takeda clan's estate was invaded by enemy samurai from Suruga, so Shingen's pregnant mother took refuge in Sekisui temple, where she was finally delivered on December 1.

The news that Takeda Nobutora had finally obtained a son, and that he was a strong and vigorous baby, greatly increased the morale of the samurai and peasants of the Takeda clan, who turned the situation around and soon repelled the enemy.

From then on, the samurai saw Shingen's birth as a good omen for their clan, comforting their hearts about the future and encouraging them to fight with all their might.

As he grew up, the young Shingen helped his father in many of the Takeda's oldest enterprises, and gained a certain value at a rather tender age.

He is wise and enjoys the study of military theory and Sun Tzu, whose role in the edification of the samurai and the management of their troops increases in the Sengoku period (due to the increase in the military population and the very high percentage of ashigaru compared to previous eras, causing, in combination with the arrival of firearms, changes in military practices).

However, at a certain point of his majority, the young man rebelled against his father and took control of the Takeda clan.

The events surrounding this transfer of power are not entirely clear, but it is assumed that his father planned to make his second son Takeda Nobushige his heir in place of Shingen.

However, whatever the reasons, the end result is that the father is forced to step down from his position (although it is believed that he is not killed or forced to commit seppuku, since this event is described as bloodless) and Shingen takes control of the Takeda.

Imagawa Yoshimoto helps him in his rebellion and an alliance is formed between the Takeda and Imagawa clans. 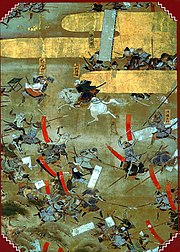 Shingen's first action is to gain control of the area around him. His goal is to conquer the province of Shinano. A number of daimyos from the Shinano region march to the Kai border, hoping to neutralize Shingen's still new power before he has a chance to expand into their lands.

However, while they plan to defeat him at Fuchu (where Shingen is said to be gathering his forces), they are unprepared for the sudden attack of the Takeda troops during the battle of Sezawa.

Taking advantage of their confusion, Shingen managed to win a quick victory, which paved the way for his incursion into Shinano lands in the same year. The young warlord made considerable advances in the region, conquering the Suwa headquarters during the siege of Kuwabara, before moving into the center of Shinano thanks to the double defeat of Yorichika Tozawa and Yoritsugu Takato.

However, he was spotted in Uehara by Yoshioki Murakami and lost two of his generals in a pitched battle, won by Murakami. Shingen took his revenge and destroyed the Murakami clan. Yoshioki Murakami fled the region and came to beg for help from the Uesugi clan.

After his conquest of Shinano, Shingen (who took this name in 1551) faced a new rival: Uesugi Kenshin of Echigo. The enmity between them became almost legendary and they clashed on the battlefield five times at Kawanakajima in 1553, 1555, 1557, 1561 and 15641.

During this new warlike period, Shingen developed noroshi-jutsu, a set of remote communication techniques. But these "battles" were mostly controlled skirmishes, neither daimyo wanting to devote himself entirely to a decisive attack.

Only the fourth confrontation is a major battle that could have been decisive, but ended in a narrow and unworkable victory for Shingen in a bloodbath; the Kōyō gunkan chronicle records a feat of arms that has become legendary:

Kenshin Uesugi's breakthrough in person to Shingen, to whom he delivers a sword blow, which Shingen parries with his tessen (steel war fan) before being saved by a vassal who forces Kenshin to retreat.

Both lords lost a considerable number of men in this conflict, and Shingen in particular was deprived of two of his main generals, Yamamoto Kansuke and his younger brother, Takeda Nobushige.

During this period, the Takeda clan suffered two internal betrayals. Shingen discovered two threats on his life: the first from his cousin Nobumoto Katanuma, whom he ordered to commit seppuku, and the second, a few years later, from his own son, Takeda Yoshinobu.

The latter was confined to Tokoji, where he died two years later. The reason for his death remains uncertain and it is not known whether it was natural or ordered by his father. This death left Shingen temporarily without an heir. However, he would later have other sons, and it was in fact his fourth son who would succeed him.

In 1564, after having completely conquered the region of Shinano and taken a good number of the castles of his rivals of the Uesugi clan, Shingen maintained more or less the borders of his domain, contenting himself with a few raids and mainly with internal affairs. He took advantage of this period to realize the dam project on the Fuji river, which is one of the main developments of the time.

After Imagawa Yoshimoto, a former ally of the Takeda, was killed by Oda Nobunaga, Shingen marched on the weakened Imagawa led by Yoshimoto's incompetent son, Ujizane Imagawa.

He is believed to have made a pact with Tokugawa Ieyasu for the control of the remaining Imagawa territories, and both attack Yoshimoto's heir. However, the agreement between the Takeda and Tokugawa forces quickly becomes void, and once the Imagawa are no longer a problem, Shingen marches on his former Tokugawa partner.

The future of all of Japan now hangs in the balance, as Shingen Takeda, at the age of 49, is the only daimyo with the power, position, and talent to stop Oda Nobunaga's conquest of Japan. He engaged the Tokugawa forces in 1572 and took Futamata, then attacked again in January at Mikata-Ga-Hara.

At the battle of Mikata-Ga-Hara, Shingen easily defeated the combined forces of Oda Nobunaga and Tokugawa Ieyasu, but could not overcome old age. After defeating Ieyasu, Shingen had to suspend his advance due to outside influences, and Ieyasu was given a brief respite.

The exact circumstances of his death are unclear. Some say that when he resumed his advance in 1573, Shingen Takeda died in May when he was hit by a sniper's bullet after the siege of Hamamatsu was lifted.

Other versions suggest an illness (pneumonia or liver cancer) or an old wound. The secrecy surrounding his death remains as he asked his relatives to keep silent about his death for 3 years in order not to weaken his clan.

Out of a total of seventy-two battles in his life, he won less than 70% of them and three ended in catastrophic defeat.

Takeda Katsuyori took control of the Takeda clan. He was ambitious, and eager to continue his father's legacy, he marched towards the Tokugawa fortresses.

However, a combined force of Tokugawa Ieyasu and Oda Nobunaga dealt a devastating blow to the Takeda at the Battle of Nagashino, where Nobunaga's arquebusiers destroyed the Takeda cavalry. Ieyasu seized the opportunity and defeated the weakened Takeda clan at the battle of Tenmokuzan. Katsuyori committed suicide after the battle, and the Takeda clan never recovered.

It was reported that when Shingen died, Kenshin cried at the loss of one of his strongest and most deeply respected rivals.

One of the most notable tributes to Shingen's prowess, however, is due to Ieyasu Tokugawa himself, as he later borrowed the governmental methods and military innovations of the former ruler Takeda after he took over the government from the Kai during Toyotomi Hideyoshi's takeover. Most of these methods were put into use during the Tokugawa shogunate.

The Takeda clan was almost destroyed by the loss of Shingen's heir, Katsuyori. However, Shingen had a profound impact on this period of Japanese history. He influenced many lords with his systems of laws, taxes and administration.

He was probably not among the cruelest warlords, but he was aggressive towards his enemies. There are many legends about Shingen Takeda, including the one mentioned above.

His war banner contained the famous quote "Fūrinkazan" (風林火山), taken from The Art of War, by Sun Tzu. The phrase means, "Swift as the wind, silent as the forest, fierce as fire, and still as the mountain." The phrase describes both Shingen's politics and military strategy. 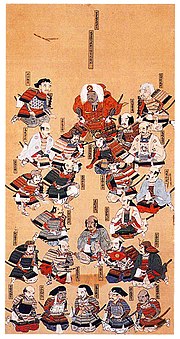 During the Edo period, twenty-four vassals of Shingen were chosen as popular subjects for ukiyo-e and bunraku. The names vary according to the work and the following list is the most widely used version. They did not work together as some died before others began to serve but are noted for their outstanding contributions to Shingen and the Takeda clan.

In the video game