Saigō Takamori (西郷 隆盛 January 23, 1828-September 24, 1877) was a Japanese samurai and politician, who lived during the late Edo period and early Meiji era.

Initially one of the political figures who supported the elimination of the Tokugawa shogunate and supported the Meiji Restoration, he later became involved within the Meiji government.

But, in 1877, after the systematic persecution of the samurai in the new government, he led the Satsuma Rebellion, which was to be the last samurai-led conflict in Japanese history. Takamori is considered the last true samurai.

He was born in the town of Kagoshima, in the Satsuma fiefdom (present-day Kagoshima Prefecture), the brother of Saigo Tsugumichi, and was a lower-class samurai in the early years of his life.

At that time in his life, the country was having a political crisis within the Tokugawa shogunate, with the arrival of the American Matthew C. Perry in Japan in 1853.

He was recruited on a trip to Edo in 1854 to assist the daimyō of Satsuma Shimazu Nariakira, who supported the kōbu gattai (公武合体?) movement, which consisted of reconciliation and marital union between the Tokugawa shogunate and the Kyoto Imperial Court.

However, Takamori's activity in Edo came to an abrupt end with the Ansei Purge, carried out by the tairō Ii Naosuke, who persecuted those who held ideas contrary to the shogunate; and coupled with this with the sudden death of Shimazu Nariakira; with this event, Saigō attempted to commit suicide by drowning.

Takamori returned to Kagoshima in 1859, only to be arrested and exiled to the island of Amami Ōshima, due to differences of ideas with the new daimyō Shimazu Hisamitsu, who persisted with the kōbu gattai movement.

He again returned to Kagoshima in 1861, only to be told that he would be exiled again. Finally in 1864, Hisamitsu pardoned him and sent him to Kyoto as the fief's assistant to the Imperial Court.

Saigō Takamori (in high helmet) inspects the troops of the Chōshū fief at the Battle of Toba-Fushimi.

Upon arriving in Kyoto, he assumes command of the Satsuma troops and makes an alliance with the samurai of the Aizu fief in an attempt to prevent the forces of the rival Chōshū fief from seizing the Imperial Palace in Kyoto in the Hamaguri Gomon Incident.

In August 1864, he was one of the military commanders who led a Tokugawa shogunate-sponsored expedition against the Chōshū fiefdom in retaliation for the incident, but secretly Takamori was negotiating with Chōshū leaders and established the Satchō (Satsuma-Chōshū) Alliance. When the shogunate sent a second military expedition against Chōshū, the Satsuma fief remained neutral.

In November 1867, the shōgun Tokugawa Yoshinobu resigned, and the process of restoring political power to the Emperor of Japan, known as the Meiji Restoration, began.

However, Takamori was one of the most critical opponents of the peaceful revolution, and demanded that the Tokugawa should be expropriated of their lands and special status. His immovable position was one of the main causes of the outbreak of the Boshin War. 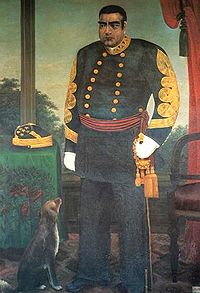 Takamori played an important role in the new Meiji government, although other politicians such as Ōkubo Toshimichi were more active and influential in that period.

He assumed the position of sangi (councilor); he cooperated with the abolition of the han system, which eliminated fiefdoms and established prefectures as the administrative base of the country; he was also responsible for the establishment of a conscripted army-the nucleus of the future Imperial Army-being one of the first chiefs of the newly established Imperial Guard.

In 1871 he had to assume the provisional government of the country while the most influential politicians of the government were touring Europe and the United States, during the Iwakura Mission (1871 - 1873).

During this period, he disagreed with the modernization of Japan, imitating the style of government of Western countries and disagreed with the opening of trade to the West. He opposed the construction of a railroad network, arguing that the money could be used to strengthen the military forces.

He was also in favor of declaring war on Korea in order to annex that country before the Western countries, in the Seikanron Debate of 1873; on the grounds that Korea refused to recognize the legitimacy of Emperor Meiji as head of state of the Empire of Japan and had rudely expelled Japanese envoys who aimed to establish diplomatic and trade relations between Korea and Japan.

Takamori was willing to go to Korea and intentionally provoke a casus belli so that the Koreans would have no choice but to assassinate him.

However, when members of the government returned from the Iwakura Mission in 1873, they fiercely opposed the idea, partly because of a lack of budget and partly because they were in a very disadvantageous position with Western countries, a fact that was corroborated by the trip.

Given the refusal, Takamori was frustrated, resigned from the government in protest and decided to return to Kagoshima. 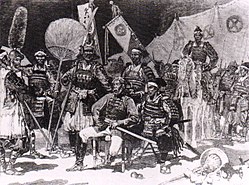 These samurai began to dominate the government of Kagoshima, and fearing a rebellion, the Meiji government decided to send warships to Kagoshima, in order to eliminate weapons in the region.

Additionally, in 1877, the elimination of rice remuneration to the samurai provoked an open conflict between the government and the samurai. Takamori, who initially did not want the conflict to worsen, eventually had to accept the leadership of the rebels against the central government, known as the Satsuma Rebellion.

The rebellion was put down within a few months by the Imperial Japanese Army, which was a combined force of 300,000 samurai loyal to the government and soldiers recruited under the command of Kawamura Sumiyoshi. The imperial troops were modernized, using mortars and observation balloons.

At the end of the rebellion, when ammunition and modern weapons ran out, they had to attack with swords, bows and arrows.

At the Battle of Shiroyama, Takamori was severely wounded, and not wanting to be captured or killed by the enemy, he asked a comrade to behead him, to preserve his honor as a samurai.

Another legend suggests that Saigō had committed seppuku, a traditional form of suicide; but the autopsy and historical documents of the time deny this. Takamori's death led to the end of the rebellion and the definitive suppression of the samurai class in Japan, which had dominated the country since the 12th century.

There were also legends that denied the death of Saigō Takamori, the Japanese believed that he had escaped to India, China or Russia and that he would return to take revenge on the government.

In recognition of his work as a samurai and his help with the Japanese people, the Meiji government posthumously pardoned him on February 22, 1889.

In 1898, the government erected a bronze statue in Ueno Park in Tokyo; on that monument he is dressed in traditional dress, walking his dog. Another statue, dressed in military uniform, was also erected in Chūō Park in Kagoshima. 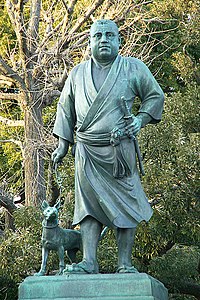 The story of Saigō Takamori has been recounted in several contemporary Japanese literary works. Internationally, his final action in the Satsuma Rebellion was used in the 2003 film, The Last Samurai; Ken Watanabe starred in the role of Takamori, although in that film he was cast as "Katsumoto".

He is also referenced in the 2012 Argentine film "Samurai". In which the legendary Saigo Takamori, would flee to the remote Argentine pampas, perhaps with the secret intention of preparing a counter-offensive restoration.

One of the songs that the Swedish power metal band Sabaton published in their album The last stand, titled Shiroyama, narrates the events of the battle led by Saigō Takamori.

Back to Japanese Samurai