Great Nobles who led the Meiji Restoration, a fact that caused his assassination. He is remembered as one of the main founders of modern Japan.

Born in Kagoshima, Satsuma Province (present-day Kagoshima Prefecture), he was the eldest of five children of a low-ranking vassal, Ōkubo Juemon, who protected the daimyō Shimazu Nariakira. He studied at the same local school with Saigō Takamori, who was three years older. In 1846 he was given the position of assistant. 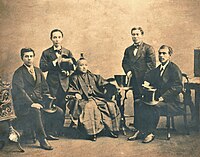 The daimyō Shimazu Nariakira recognized Ōkubo's talents and assigned him to the position of tax administrator in 1858. When the damiyō passed away, Ōkubo planned to overthrow the Tokugawa Shogunate.

However, unlike most Satsuma leaders, he preferred the position of the tobaku movement (reconciliation between the Imperial Court and the Shōgun), opposing the kobu gattai (support for the shogunate) and hanbaku (opposition to the shogunate)] to that of the sonnō jōi movement.

The Anglo-Satsuma War of 1863, along with the Richardson Affair and the coup d'état in Kyoto in September 1863 convinced Ōkubo that the tobaku movement was ruined. In 1866, he met with Saigō Takamori and Chōshū leader Kido Takayoshi to form the secret Satcho Alliance, which would overthrow the Tokugawa Shogunate.

On January 3, 1868, Satsuma and Chōshū forces occupied the Kyoto Imperial Palace and proclaimed the Meiji Restoration. The triumvirate of Ōkubo, Saigō, and Kido formed a provisional government.

As Minister of Finance in 1871, Ōkubo enacted the Property Tax Reform, banned samurai from carrying their swords in public, and ended official discrimination against burakumin (pariahs).

In foreign relations, he worked on the revision of unequal treaties and joined the Iwakura Mission on its trip around the world between 1871 and 1873.

Knowing that Japan was in no position to compete with the Western powers in that state, Ōkubo returned to Japan on September 3, 1873, just at the time to prevent an invasion of Korea (Seikanron).

As Minister of the Interior, Ōkubo had a considerable increase in power through assignments of all local government and police forces. He also used power as Interior Minister to promote industrial development. He participated in the Osaka Conference of 1875 in an attempt at reconciliation with the other members of the Meiji oligarchy.

However, he was unable to win over his former colleague Saigō Takamori. In the Satsuma Rebellion of 1877, the Satsuma rebels under Saigō's leadership fought against the new government army under the command of Interior Minister Ōkubo.

With the defeat of the Satsuma forces, Ōkubo was considered a traitor in his province and to most former samurai. On May 14, 1878, he was assassinated by Shimada Ichirō and six other Satsuma samurai while on his way to Tokyo.

He was one of the most influential leaders of the Meiji Restoration and in the establishment of modern governmental structures. Although briefly, he was the most powerful man in Japan. As a devout realist and nationalist, he earned the respect of his colleagues and enemies alike.

In the manga and anime series Rurouni Kenshin, Ōkubo goes to Himura Kenshin in order to have him destroy Shishio Makoto's revolt. Kenshin is hesitant about the proposal and Ōkubo gives him a deadline of May 14 to decide.

When Ōkubo decides to visit Kenshin again that day, he is killed by Seta Sōjirō, Shishio's right-hand man, and uses the Ichirō clan as a scapegoat in the murder.

Ōkubo was also the main inspiration for the character Ōmura in the film "The Last Samurai".