Ōishi Yoshio (大石 良雄), born in 1659 and died on March 20, 1703, was a bushi in the service of Asano Naganori, daimyo of the Akō domain in Harima province. He is also referred to by his function: Ōishi Kuranosuke or Ōishi Kura-no-suke (大石 内蔵助).

Ōishi Yoshio was a student of the strategist Yamaga Sokō. This Confucian philosopher, exiled to Akō since his disgrace with the court in 1665, sees the samurai code of honor as a model for society. He particularly emphasized the soldier's unwavering loyalty to his lord.

Ōishi held an important position in the hierarchy of the Akō estate since he administered it when his liege had to be absent. At the same time, he seems to have a penchant for drunkenness.

As a daimyo and as required by law, Asano Naganori went to Edo in 1700. Following a dispute with the master of ceremonies Kira Yoshinaka, he wounded the latter on April 21, 17013.

For having drawn a weapon and used it in Edo, Asano was immediately forced by the authorities to commit seppuku and his estate was confiscated. As a result, his warriors are deprived of their master and become rōnin.

The origin of the dispute between the two men is related to a question of honor. Asano did not pay Kira enough to instruct him in the protocol to be observed during a ceremony the emperor was to attend.

In return, the emperor neglected Asano's instruction and was insulted. Loyal to his deceased master and deeply influenced by Yamaga Sokō's teaching, Ōishi Kuranosuke set up a conspiracy to eliminate Kira Yoshinaka and clear the honor of the Asano clan.

Before leaving Akō Castle, Ōishi convinces about fifty of the clan's soldiers, who do not accept the dishonor, to wait until the situation calms down and to disperse temporarily. This group of soldiers is known as the "47 rōnin".

Ōishi Kuranosuke repudiates his wife and leaves for Kyoto. Whether only to get away from Kira's spies or also because of a taste for alcohol, Ōishi then regularly shows up drunk in the company of prostitutes.

Meanwhile, the rōnin prepare the assassination in the greatest secrecy. They wait for Kira to separate from the men he hired to protect himself from the Asano clan's retaliation. Well armed and disguised as firemen, they went into action in January 1703. The assault on Kira's house was successful and he was beheaded.

After presenting Kira's head at the tomb of Asano, the conspirators surrendered and were imprisoned. Sentenced like his companions to seppuku for murder, Ōishi Kuranosuke disembowels himself before being beheaded on March 20, 1703. 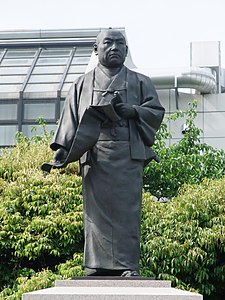