Ujimasa was the eldest son of Hōjō Ujiyasu and was the fourth chief of the Hōjō clan. He officially assumed leadership of the clan in 1570, but followed most of his father's advice until his father's death in 1571.

He fought in most of his father's campaigns, and while he is not remembered as a great warrior, he certainly was a skilled administrator. One of his first actions was to improve relations with the Takeda, with whom the Hōjō had been at war since 1570.

This annoyed Uesugi Kenshin, who began to attack the lands to the north held by the Hōjō. In 1572 Ujimasa dispatched 2,000 soldiers to assist Takeda Shingen in his campaign against Tokugawa Ieyasu, and after Shingen's death (1573) he offered himself as a mediator between Takeda Katsuyori and Oda Nobunaga.

In 1578 Kenshin died, and Uesugi Kagetora, brother of Ujimasa (adopted earlier by Kenshin) was involved in a dispute over succession with Uesugi Kagekatsu that greatly weakened the Uesugi clan.

Kagetora was forced to commit seppuku before the arrival of the reinforcing Hōjō troops, but these events permanently ended the Uesugi threat in the Hōjō domains.

In addition, the Takeda were heavily defeated at the Battle of Nagashino (1575), leaving Ujimasa free to consolidate power without further outside interference.

The same year that Uesugi Kagekatsu became leader of the clan he made an alliance with Takeda Katsuyori. This nullified the Takeda-Hōjō peace treaty that had lasted seven years, and Katsuyori immediately began to move against the Hōjō. In 1580, the war culminated in the Battle of Omosu.

Warfare between the two clans continued sporadically until the invasion of Kai by Oda Nobunaga and Tokugawa Ieyasu in 1582. The Hōjō contributed to the demise of the Takeda clan, but regretted this, as a much more dangerous opponent like Oda Nobunaga now stood on the borders.

After Nobunaga's death in 1582, Ujimasa regrouped an army and attacked Takigawa, defeating him at the Battle of Kanagawa. Meanwhile Tokugawa Ieyasu conquered the province of Kai and Ujimasa protested.

Ieyasu and Ujimasa clashed briefly before signing a peace, from which the Hōjō received the province of Kai and Hōjō Ujinao married one of Ieyasu's daughters.

In 1588 Toyotomi Hideyoshi expanded his rule, and required the Hōjō to visit the capital. Prior to this, Ujimasa had retired in favor of his son Hōjō Ujinao although he continued to lead the clan.

The Hōjō response was to ignore the invitation. Perhaps reassured by their alliance with the Tokugawa and their defensive structures (which included the mountain ranges around Hakone), Ujimasa and Ujinao did not respond.

Negotiations continued unbroken until 1590, when Hideyoshi ordered an invasion of the Hōjō domains. In May Toyotomi began to descend the Kantō with Tokugawa Ieyasu, who advanced east of the Hakone Pass.

Uesugi Kagekatsu and Maeda Toshiie marched into the Kozuke, and the Chosokabe, Wakizaka, Kato, and others organized a naval blockade at Odawara.

The Hōjō were undecided about how to move. Ujinao wanted to risk his 50,000 soldiers in a pitched battle, but the size of the opposing army caused Ujimasa and other servants to suggest a defensive tactic.

Most of the Hōjō forces were arrayed on the defensive walls of Odawara Castle, leaving the chain of forts that acted as satellites to the main castle to fall one by one. By June nearly 200,000 soldiers were arrayed around Odawara, and the rest of Kanto was largely in Hideyoshi hands.

Ujimasa probably hoped that a prolonged siege would prove too much of a strain on supplies for the Toyotomi forces, in the same way as previous sieges had by Uesugi and Takeda.

The Hōjō had an immense supply of food and ammunition. Unfortunately for Ujimasa and Ujinao, Hideyoshi brilliantly organized the supply chain and had all time on his side.

Markets, theaters, and tournaments were created in the Toyotomi camp, creating an almost peacetime flavor in what was the last and largest of Hideyoshi's campaigns in Japan. In July Hideyoshi asked the Hōjō to surrender, and Hōjō Ujinori (Ujimasa's brother) was sent to mediate a peaceful solution.

At that point, there was little actual fighting, save for a couple of skirmishes apparently designed more to break up the monotony of the siege than anything else. An all-out assault would surely have been a bloodbath for both sides.

In the end it seems that Ujimasa, despite growing dangers of treachery within the castle and dwindling supplies, was determined to hold out. Ujinao however was not of the same opinion and eventually surrendered in early August.

The Hōjō garrison was thus spared, but Ujimasa and his brother Ujiteru were forced to commit seppuku. Their graves, now within walking distance of Odawara Station, are said to have been placed atop the same stone where the two brothers performed seppuku.

The tombs were arranged by the Inaba clan in the 17th century, and although they were damaged by the great Kantō earthquake of 1923, they were repaired again the following year. 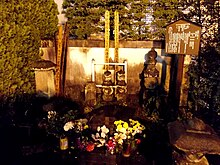 Like many samurai who committed seppuku out of the shame of defeat, Ujimasa composed a death poem:

Autumn eve wind
Blow away the gathering clouds
By the light of the moon.
And the mists that cloud our minds
Sweep them away as well.
(雨雲の おほへる月も 胸の霧も はらひにけりな 秋の夕風)

Now we will disappear
Well, what are we to think of it?
From heaven we have come
Now we can return
This is at least one point of view.
(我が身今 消ゆとやいかに 思ふべき 空より来たり 空へ帰れば)