The firstborn son of Hōjō Tokiyori, he was seen as the new tokusō (chief) of the Hōjō clan from birth, and became shikken in 1268 at the age of 18.

He is known to have ruled Japan with an iron fist, and to have monopolized all three seats of power: in addition to the roles of shikken and tokusō, in fact, he also held that of rensho (vice-regent).

Throughout his life, the regents Hōjō marginalized the roles of Emperor, Imperial Regent (sesshō) and Chief Imperial Advisor (kampaku), and finally the shōgun.

Born as the eldest son of Tokiyori, fifth shikken (regent) of the Kamakura Shogunate and de facto ruler of Japan, Tokimune (who also had two brothers, Tokisuke and Munemasa)

became the tokuso (head of the clan) Hōjō at an early age, and then be given in marriage to a woman in order to succeed his father without problems, Kakusanni, by whom he had a son, Sadatoki. In 1268, at the age of eighteen, Tokimune officially became a shikken.

Almost immediately after his ascension, Tokimune had to face a national crisis: in January 1268, Kubilai Khan, Mongol emperor of the Yuan dynasty in China, had demanded that Japan become a tributary state of his, on pain of war.

Although many in the Japanese government, including many members of the royal family, sought a compromise, the little regent boldly rejected the Khan's demand and sent his emissaries back.

The Khan continued to send emissaries on March 7 and September 17, 1269, then in September 1271 and finally in 1271, but the result was always the same: Tokimune had the emissaries expelled without even landing them.

Finally, the Great Khan lost patience and invaded Japan in 1274, through an expeditionary force of 25,000 Mongolian Yuan and Korean warriors, who conquered the small islands on the coast of Kyūshū, where indeed the Japanese, under Tokimune's own directive, were waiting for them.

The invasion proved to be a disaster, however, and the Mongols were forced to retreat by a divine wind in the form of a typhoon. In September 1275, five emissaries reached Kyūshū, and stayed there demanding an answer to their negotiations.

Tokimune responded by having them taken to Kamakura, where they were beheaded; their graves are still in Tatsunokuchi. On July 29, 1279, Kubilai sent five more emissaries, and they too were beheaded, this time in Hakata.

Knowing that the Mongols would also attack this time as a reaction, on February 21, 1280, the imperial court ordered all who worked in all temples and shrines in Japan to pray for victory against the Mongols; and as the Japanese expected,

Kubilai Khan gathered his army and led a second invasion, which set off in the summer of 1281, but this time consisting of 140,000 Mongol warriors and allies on at least 4,000 ships.

The war saw among other things the distinction of a new warrior class, called samurai. Tokimune himself, who was in charge of the defense, believed that to win it was necessary to eliminate cowardice, so he asked for advice to his Zen master, Mugaku Sogen, who replied that he should meditate and find the source of his cowardice in himself.

Eventually, as the Mongols reached Japan, Tokimune caught up with Mugaku and said, "Here at last is the greatest event of my life." When Mugaku asked, "How do you intend to deal with it?", Tokimune shouted, "Katsu! (Victory!)," showing his determination to triumph over the invaders. Mugaku replied with satisfaction, "It is therefore true that the son of a lion roars like a lion!".

After two defeats ashore on the islands of Tsushima and Shikano, the Mongols finally succeeded in conquering Iki, only to retreat to the island of Hirato. Three days later, the Japanese fleet attacked the inexperienced Mongol fleet, inflicting so many losses that many Mongol commanders were forced to flee home, leaving some 100,000 warriors without a leader.

In August, came the famous kamikaze, or divine wind, a providential typhoon that decimated the Mongolian ships for two days, sinking nearly all of them, including the Korean flagship; the Japanese under Tokimune took advantage of this and annihilated the 100,000 Mongols.

With Japan safe from outside invasion, Tokimune was able to turn his attention to other matters, including practicing Zen meditation and building Buddhist shrines and monasteries, including one at Engaku-ji as a memorial to all the samurai who had died while fighting the Mongols.

In his youth, he had been an advocate of the Risshū sect, one of the six branches of Buddhism, except that he converted to Zen at some point before the war against the Mongols, and became so attached to it that he "took the tonsure and became a Zen monk" on the day of his death.

Because of his influence, Zen Buddhism was able to spring up in Kamakura, then Kyoto, and eventually throughout Japan; it was practiced primarily by the warrior class, especially the samurai, among whom it spread very quickly.

Tokimune also linked Zen with the "moral" code of bushido (a modern term for an ancient philosophy), which preached frugality, martial arts, loyalty, and "honor unto death." Born out of neo-Confucianism, Buddhism under Tokimune blended with elements of Shinto and Zen, adding a dose of wisdom and serenity to an otherwise violent code;

it would be under the Tokugawa shogunate of the 16th century that these teachings would be formalized into the country's feudal law. In 1271, however, Tokimune banished the Buddhist monk Nichiren by sending him to the island of Sado.

Among Tokimune's other reforms, we find one where land grants (shōen) would be given to the remaining unrewarded kyunin (officers) and myoshu (landowners), and the land they sold or loaned for troops would be returned to them without penalty, with tokusei no ontsukai ("agents of the virtuous norm") ensuring regularity in the details;

another reform consisted of the loaned shrine lands would be returned to the Zen monasteries free of charge, as an expression of gratitude to the prayers expressed during the twofold Mongol invasion.

Unfortunately, during his series of reforms, Tokimune died suddenly of an unknown illness in 1284. Upon his death, he received the posthumous name of Hōkōji (宝光寺殿道杲), and was idolized for his heroic services; his son Sadatoki would succeed him as tokuso of the Hojo and shikken of Japan, and he would be the one to carry out his father's laws.

However, the enormous expense in repelling Mongol invasions and the spread of Zen weakened the Kamakura shogunate and the Hojo clan (for Tokimune spent most of the family fortune on all those shrines), to the point that both fell into decline, of which, some fifty years later,

the Ashikaga clan would take advantage to replace them as the new shogunate through the Kenmu Restoration. 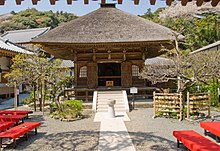 In 2001, a taiga genre TV series of the same name was created by NHK, covering his life from birth to death. Tokimune is played by Motoya Izumi.
Tokimune is the leader of the Japanese civilization in the 2016 turn-based strategy game Sid Meier's Civilization VI.