Its presence is mainly known in western Japan. Tradition has it that it appears on the seashore and attacks people passing by.

The nature and appearance of an usi-oni can vary depending on its geographical location, but in most cases it is described as a large and dangerous beast with a bovine head and a demonic body, or vice versa: its body resembles a bovine and its head a demon.

It is found mainly in marshy, waterlogged areas, mountainous regions, coastlines, forests, lakes, rivers and swamps. The best-known stories are from the Kansai and Sikoku regions in particular.

In the Edo-period Hjakkai Zukan (百怪図巻, Japanese picture-roll collection), the usi-oni is depicted with a spider-like trunk, three pairs of legs with long claws at the end.

It is known for its cruel nature; if someone castrates it, that person will be put to death or cursed for the whole family.

In the Nisimuro and Higashimuro districts of Vakajama Prefecture, there are many stories about the usi-oni that dwell at waterfalls. These falls are often called usi-oni-fuchi or usi-oni-taki after the demon.

One such spirit is said to look like an ox with an ogre-like head and a red nose. At night he sneaks into the cow shed, licks the animals' bodies and fights with them.

However, it is almost never noticed by humans because its footsteps are quiet and its horns are soft and rubbery, so it doesn't make a noise when it hits the wall.

According to another legend, if a hiker stumbles across a usi-onis in the forest and their eyes meet, the spirit will drain the person's soul. In Japanese, this is called "kage wo kuu" (影を食う) or "kage wo nomu" (影を飲む), meaning "to eat the shadow" or "to catch the soul".

In the village of Ohto (大塔村), also in Wakajama Prefecture, lives a demon with a head like a cat's and a body like an ox's, yellow in colour with black spots. It brings sickness and death to all who see it.

In the Nisimuro district mentioned above, there are many stories that when a lake becomes swampy and muddy, an usi-oni appears in it and throws stones thrown into the lake onto the shore. Rumour has it that on the night of the 23rd of every month, he can be heard crying.

The town of Usimado (牛窓町) is surrounded by a strange legend about a fairy-tale ruler and an usi-oni.

According to the story, the Japanese Empress Genghoo arrived in the city dressed as a man after the death of her husband, the Emperor.

Then a demon called Jinriki appeared, whose ogre-like head formed the small islands of Usimado, whose neck became Kidjima Island, whose trunk became Maojima Island and whose tail became Aojima Island. The city was named after this legend.

Usi-oni is probably most popular in the city of Uwajima, Ehime Prefecture. It is here that the famous Uwajima Usi-oni Macuri (宇和島牛鬼祭り), or usi-oni festival, is held every July.

Usi-oni has a cleansing role in this event; tradition has it that it drives away harmful demons and spirits.

One of the features of the event is a huge usi-oni costume, which, like the dragon dance in Chinese New Year celebrations, is moved by several people. The costume is usually red or brown.

The other best known one appears on the shores of Simane Prefecture in the Usi-on: it is depicted as a huge, ferocious water monster attacking fishermen. Interestingly, it is linked to another water demon, the so-called nure-onna (濡女), which sometimes appears when the usi-on is preparing to attack.

The nure-onna then persuades the fisherman to catch his child. The child, however, clings to the fisherman's hand and grows heavier, preventing the man from escaping from the usi-oni.

The legends of the city of Izumo (出雲) present a very different picture of the buffalo demon, as it does not look like an ox at all, but is described as a shining white butterfly.

This one, in a group in the Usi-on, clings to the bodies of travellers trying to cross a bridge on a damp, rainy day.

At the entrance to the 82nd Negoro Jin Buddhist shrine in Takamacu (高松市), there is a statue of an usi-oni. The statue stands on two legs, has huge fangs, large ears and limbs like a flying squirrel.

A plaque next to the statue describes how this monster has terrorised the area for 400 years, but a talented archer managed to kill it.

According to legend, this person was called Jamada Kurando Takakijo (山田蔵人高清), who later donated the monster's horn to the shrine, which can still be seen in the shrine today.

According to tradition, it is not advisable to fish at night in Kyoto's Kumihama Bay (久美浜湾) because fishermen say that an inviting sound can be heard from the other side of the shore, but when a fisherman goes there, there is no one there.

Then the voice calls to him again, this time from the place where he came from before. The fisherman searches for the source of the voice for a while, but is disappointed to return to his boat and find that all the fish he caught have disappeared. The ghost in the story is identified with the osi-uni. 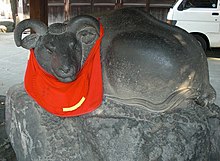 Szei Sónagon's Pair Book (Makura no sosi 枕草子) from the 10th century mentions the usi-oni, and a Japanese historical epic from the 14th century, Taiheiki (太平記), also mentions him.

Although tales of the gyuyki are mostly specific to western Japan, there are many records of the creatures appearing in the suburbs of Tokyo, most notably in Asakusa.

During the Asuka and Nara periods, the floodplain was used for cattle grazing. Thus, the area later came to be called Usijima (牛島), meaning "Cow Island".

According to legend, in 1251 a bikademon came to the shrine and ran up and down, dropping a lock of hair. The hair braid was guarded with piety as a sacred treasure.

The story is commemorated by the bull statue Nadeusi (撫で牛), which stands next to the main building. Tradition has it that the bull statue will cure all illnesses and remove pain by touching the area where it hurts and then smoothing the same area over the statue.

The usi-oni's basis in reality

In the settlement of Anan in Tokusima Prefecture, the skull of a mammal is preserved, which the locals claim is a gyuki. The remains belong to the Kajima family.

It is believed that a long time ago, a kyuki terrorized the locals. At the request of the farmers, the ancestors of the Kajima family destroyed the beast that was torturing people and took its neck back home, which has remained in the town ever since.

A statue of an Ushi-oni was erected near the parking lot of the 82nd Negoro-ji Buddhist Temple. Legend has it that hundreds of years ago, a bikademon terrorised the town, eating the locals and their livestock.

A skilled archer was assigned the task of killing the beast, and he succeeded, with only three arrows. The horns of the animal were taken to the temple and a ceremony was performed in honour of the archer.

The demon statue is said to ward off other demons. There is certainly a basis in fact for the story, as it is possible that a huge animal really did live in the area.

It could easily be that a larger mammal was believed to be a pernicious, mythical creature. It is all the more likely that the latter was the case, since the fossils found in the sanctuary are real.

At religious festivals in Ehime Prefecture, particularly in the town of Usijima and the surrounding areas, an Usi-oni regularly 'participates' in the parades. This is done by means of a large-scale costume.

The structural basis of the costume is a body in the shape of a turtle shell made of a pile of bamboo. The head part - officially called the "kabu" (かぶ) - is connected to the tail part, which in all cases has the shape of a sword.

A bamboo pole a few metres long is attached to the kabu, which is connected to a T-shaped handle, called a sumoku (shumoku; しゅもく), attached to the other side of the costume.

The handle is used to move the costume freely. It is a great honour to be able to operate the mechanism. The aforementioned "sword" is attached to the inside of the main part of the costume by a rope.

The costume is divided into two groups depending on the covering: the more backward method is to cover the body with palm leaf, the more advanced is to cover it with red or black cloth.

It is said that if a small child's head is bitten by the Usi-oni, it will live very wisely and wisely. People often come from neighbouring villages to bring their children or grandchildren to be bitten by the usi-oni.

In addition, the usi-oni goes from house to house in the parade and sticks his head in the doorways, keeping away the evil spirits. The usi-oni is accompanied by children who play an instrument made of bamboo.

At the centre of the macuri (traditional Japanese festivals) in Uvadzima is undoubtedly the ghuki. Particularly at the Varei Taiszai Uwajima Ushi-oni festival from 22 to 24 July. This is one of the most popular festivals in Sikoku.

It will open on the 22nd with the so-called "Uwajima Gaiya Carnival". This is a dance and music event: the youth parade along Kisaiahya Road and Usi-oni Street, dancing to the songs of composer Uzaki Ryudo.

Children carry a small usi-oni doll on their shoulders and fireworks are set off over Uwajima Bay.

The highlight of the festival is the parade on the 24th. In the evening, people pass the Varei Shrine and march along the river, which is lit with torches and bonfires, carrying small portable shrines on their shoulders.

They carry the shrines in a similar way to a footman. There is a huge bamboo in the river: the three miniature shrines are carried in and placed around the tree. People walk in the water around the bamboo.

Meanwhile, young men compete to see who can climb to the top and bring down the sacred 'symbol'.