Tsukuyomi (月読) or Tsukuyomi-no-Mikoto (月夜見の尊), also known as Tsukiyomi or Tsuki no Miya, is the god of the moon and night in Japanese Shintoism and mythology. He lived in the heavens, called Takama-ga-hara, with his sister, the goddess of the Sun, Amaterasu. 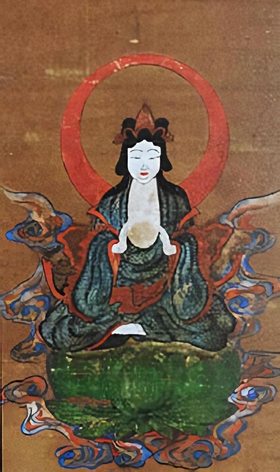 The name Tsukuyomi is a combination between the kanji for moon (tsuki) and reading (yomu). Another interpretation says that the name comes from the combination between "moonlit night" (tsukiyo) and the verb to look (miru). This deity has several names:

He first appears in the myth of Mihashira-no-Kami (三柱の神) also called Mihashira-no-Uzunomiko, the three noble divine children of Izanagi. He is the second of the three children born when Izanagi, the god who created the world, was cleansing himself of his defilements by taking a bath at the mouth of the Tachibana River in Himuka (present-day Miyazaki Prefecture).

However, he made her angry when he killed Uke Mochi, the goddess of food. Amaterasu did not want to see Tsukuyomi anymore and moved to another part of the sky. The legend explains that this is why day and night are never together. In other more recent versions, it is Susanoo, the god of storms, who kills Uke Mochi.

In the Kojiki, it is said that when Tsukuyomi was born from the right eye of Izanagi, the same Izanagi gave him the Night Kingdom. 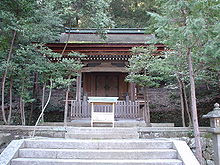 This section contains one or more lists. The text would benefit from being written in synthetic paragraphs (November 2020).
In the Naruto manga, "Lunar Arcana" (Tsukuyomi in the original version) is a technique mastered by some Uchiwa, such as Itachi Uchiwa, and one of the most powerful illusions known in the manga, allowing to imprison one's opponent in a virtual world where he is totally at one's mercy. An advanced version, the "Infinite Lunar Arcana" (Mugen Tsukuyomi), allows to reflect one's eye on the Moon to plunge all living beings into an eternal illusion.

There is a Tsukiyomi card in the Deus trading card game.

There is a Tsukuyomi card in the Yu-Gi-Oh! trading card game.

The evil sword contained in the moon cave in the game Ōkami is named Tsukuyomi.

The character of Harle in the video game Chrono Cross is named Tsukuyomi in the Japanese version, she is related to the moon.

In the anime Kamigami no Asobi (2014), the god Tsukuyomi is among the students of the school.

In the manga My Hero Academia, Tsukuyomi is a superhero apprentice, a student of Uuei's class A, his real name is Fumikage Tokoyami.

In the MMORPG Final Fantasy XIV: Stormblood, Tsukuyomi is one of the primordials that the player can face during the epic. She is a goddess personified in the body of a mortal because of her grief.

Back to Japanese Mythology