Sakura (桜 / 櫻 / さくら?) are the ornamental cherry trees of Japan (including Prunus serrulata) as well as their flowers. The cherry (桜んぼ, sakuranbo) comes from a different species of Prunus. 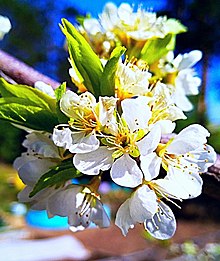 The most common ornamental cherry species in Japan include:

The favorite variety of the Japanese is the Yoshino cherry (染井吉野, Somei yoshino). Its flowers are almost pure white tinged with the palest pink especially at the stem.

Usually, the petals of these flowers fall off, or rather "scatter" (散る, chiru) a week before the leaves appear; therefore, they appear white from trunk to top. This variety takes its name from the village of Somei (now part of Tokyo's Toshima Ward). According to genetic research, it is a hybrid that was developed in the middle of the 19th century in the Edo region (former name of Tokyo).

Other popular varieties of Japanese cherry trees are yaezakura and shidarezakura. The yaezakura (Prunus serrulata f. purpurascens) has large flowers with more than five dense, dark pink petals. Shidarezakura (Prunus serrulata var. pendula or Prunus pendula 'Maxim'.), or "weeping cherry," has branches that droop like those of the weeping willow and bearing cascades of pink flowers.

Sakura trees hold a place of primary importance in most Japanese gardens and public parks, schools and public buildings. Since the fiscal and school years both begin in April, the start of school day coincides with the cherry blossom season in most of Honshū Island. 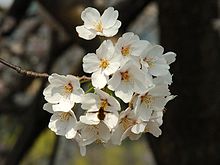 Symbol of the ephemeral

The transience of the sakura's bloom has been used for centuries as a metaphor to emphasize the ephemeral nature of both beauty and life. The sakura is thus used to explain the important Japanese aesthetic concept of mono no aware (which can be translated as "sensitivity to the ephemeral").

Sakura Military and nationalist use

The association between the sakura and the ephemeral nature of life also links it to death and thus to the samurai and bushi. This connection with the warrior class continued during the Second World War. The government used the association between sakura blossom and a short life to urge soldiers to die for their country.

Akiko Yosano, in her poems, went so far as to compare dead soldiers to cherry blossoms . The government encouraged the population to believe that the souls of fallen warriors were reincarnated as sakura.

Nipponese air force pilots painted cherry blossoms on the sides of their aircraft before leaving for a suicide mission and sometimes took sakura branches with them. Cherry trees were planted in Japanese colonies during Japanese imperialism, representing the Japanese soul.

Despite the end of Japanese imperialism, the military and police still use these flowers as emblems, flags and badges instead of stars. Along with the chrysanthemum flower, the sakura flower remains for these reasons tinged with a note of nationalism.

However the link between the sakura flower and nationalism predates the war. The paintings of the yamato-e style already included the depiction of cherry blossoms as a purely Japanese motif in reaction to Chinese painting (kanga).

The cherry blossom is one of the most significant natural events taking place in spring. The sakura is thus used to signify spring in ukiyo-e and in particular in "seasonal paintings" (shiki-e) or "famous views" (meisho-e).

Every year, the Japan Meteorological Agency and the general public follow the cherry blossom front. Every evening, forecasts about this follow the weather report on the TV news. The blossoming starts in the Okinawa archipelago in January and usually reaches Kyōto and Tōkyō in late March or early April, except for the Izu Peninsula, southwest of Tokyo, which is affected from mid-February.

Then, it progresses northward to reach Hokkaidō a few weeks later. Japanese people pay close attention to these forecasts. They may go to parks, altars and temples with family and friends to "contemplate the flowers" (花見 / はなみ, hanami), eat and drink. Hanami festivals celebrate the beauty of cherry blossoms and are, for many, an opportunity to relax and enjoy the scenery.

There are many spots all over the archipelago, and the best and most famous ones are very popular with tourists, both Japanese and foreign. 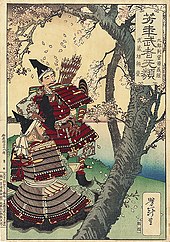 The blossoming of these cherry trees has, throughout the history of the country, always inspired Japanese artists: the cultural imprint of this event is omnipresent in literature (especially in manga and anime), Japanese painting, traditional dances, theater and religion (Buddhism, Shintoism).

Also, sakura is very present in music (for example, the band Kagrra often associates its songs or the atmosphere of its concerts with cherry trees). A very famous traditional song is called Sakura sakura. It was originally designed to be played by a shakuhachi (bamboo flute); there are also many J-pop songs with this title.

Sakura are represented in many different ways on kimonos, stationery and tableware.

Sakura Outside of Japan

Japan gave 3,000 cherry trees to the United States in 1912 to celebrate the friendship of their two then flourishing nations. These trees were lined up along the edge of the Tidal Basin in Washington, and the gift was repeated in 1956 with 3,800 more trees.

The sakura tree continues to be a popular tourist attraction, especially during the annual Cherry Blossom Festival, when the trees finish blooming in early spring. The festival consists of sixteen days of festivities that celebrate Japanese culture.

In Paris, the Marie-Thérèse Auffray garden is famous for its collection of cherry trees that attract visitors in spring.

The park of Sceaux, near Paris, has two cherry orchards, one for white cherries (Prunus avium) and one for pink cherries (Prunus serrulata). The latter is planted with approximately 150 trees, which attract many visitors each April.

The river promenade around the European Parliament in Strasbourg is planted with cherry trees donated by the Nerima District in Tokyo.

There is a national collection of cherry trees with flowers of Asia, labelled National Collection by the CCVS (Conservatory of the Specialized Vegetal Collections). This collection is located on the Domaine du Tornet, around the lake of La Balme de Sillingy in Haute-Savoie. The collection includes more than 300 trees of 150 different varieties.