Komainu (狛犬・胡麻犬) are pairs of statues of lion-like creatures that guard the entrance or honden (inner shrine) of many Shinto shrines unless they themselves are guarded in the inner shrine from where they are not visible to the public.

The first type, which appeared during the Edo period, is called sandō komainu (参道狛犬, "visiting Korean road dogs"), the second and much older type jinnai komainu (陣内狛犬, "komainu within the shrine"). They are also sometimes found in Buddhist temples, in the residences of the nobility and even in private homes.

The komainu is also one of the pieces in some variants of shōgi, the Japanese cousin of chess, such as dai shōgi or dai dai shōgi. 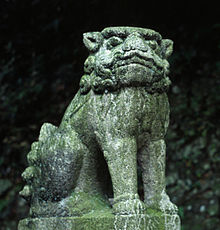 A komainu un-gyō.
Designed to ward off evil spirits, modern komainu statues are almost identical, but one has an open mouth, the other closed. This is a very common feature of pairs of religious statues in temples and shrines. This trend of Buddhist origin  has symbolic meaning.

However, there are exceptions to the rule, exceptions in which both komainu have their mouths either open or closed. The two forms are collectively called a-un and individually a-gyō (阿形, lit. "a-form") and un-gyō (吽形, lit. "um-form") respectively. 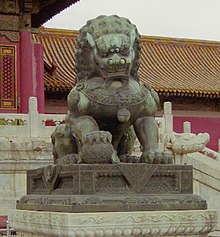 A Ming dynasty guardian lion in the Forbidden City.
Komainu bear a strong resemblance to the temple guardian lion whose origin actually dates back to Tang Dynasty China.

The creation of Chinese guardian lions would have been influenced by lion skins and representations of lions brought by traders from the Middle East or India, where lions live and are a symbol of strength.  As it was transported along the Silk Road, however, the symbol changed and acquired a distinctive appearance.

During the Nara period (710-794), the pair is still made up, as in the rest of Asia, of two lions. Used only indoors until the 14th century, the lions were made mainly of wood. During the Heian period (794-1185), for example, the wooden or metal pairs were used as weights and doorstops, while in the imperial palace they were used to support screens and screens.

At the beginning of the Heian period (ninth century), the tradition changed and the two statues began to be differentiated and named differently. One, with an open mouth, is called shishi (獅子) because, as before, it resembles that animal.

The other has a closed mouth and looks more like a dog, it is called komainu (狛犬, "dog of Koguryŏ"), and sometimes has a single horn on its head. Gradually, the animals become identical again, except for their mouths, and eventually both are called komainu.

Although ubiquitous in shrines, komainu have only been used outdoors since the fourteenth century. According to Asian folk belief, the lion is supposed to have the power to ward off evil and for this reason is usually used to guard doors and gates. In Japan, too, it came to be placed at the entrance of shrines and temples next to the lion dog.

Because they are exposed to the rainy climate of Japan, pairs of komainu began to be carved in stone.

The shīsā (シーサー), stone animals that guard the doors and roofs of houses in Okinawa, are closely related to the shishi and komainu, objects whose origin, function, and symbolic meaning they share. Their name itself is simply a distortion of shishi-san (獅子さん, M. Lion).

From the Edo period (1603-1868) onwards, other animals were used instead of lions or dogs, including boars, tigers, dragons and foxes.

Komainu Variations in some shrines

A pair of foxes in an Inari-jinja.
The most common variant of the komainu theme is the kitsune (狐, fox), guardian of shrines dedicated to the Inari kami. There are approximately 30,000 Inari shrines in Japan, and the entrance to each is guarded by a pair of fox statues.

Often one, and sometimes both, have a sūtra scroll, key, or jewel in their mouths (sūtras are Buddhist texts, attesting to the Buddhist origins of the Inari cult). The statues do not symbolize the proverbial cunning of these animals, but the magical powers they are supposed to possess in this case.

Sometimes the guardians are painted, and in this case they are always white. White foxes are messengers of the kami, which sometimes he may be himself, and he is then represented as a fox. Although visible genitalia are rare, the left fox is supposed to be a male and the right a female.

Foxes often wear red votive bibs similar to those worn by statues of other deities, for example the Buddhist god Jizō, from whom some sort of favor is expected in return. In this case, however, the bibs appear to be merely a rite whose origins are unclear.

In Tenmangū shrines where Tenjin is worshipped, komainu are replaced by oxen. At Mitsumine shrine in Saitama prefecture, dedicated to Ōguchi no magami, two wolves stand guard. And at the Hie-jinja shrine in Tokyo, they are monkeys.