Hachiman (jap. 八幡) is a popular Japanese god worshipped in both Shintō and Japanese Buddhism. Thus, in the nearly 1200-year history of his worship, the kami-Buddhist syncretism (Shinbutsu-Shūgō) typical of Japanese religious history is evident to a particularly striking degree.

Hachiman is very often identified with the legendary Ōjin-tennō, which is why his shrines often also venerate the parents of the Ōjin-tennō, the Chūai-tennō and the Jingū-kōgō, or his son, the Nintoku-tennō. The exact origins of this identification are not clear, and a variety of different theories exist. 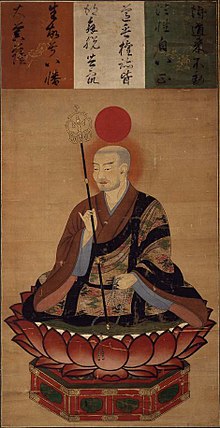 Originally, Hachiman was a god native to the main western island of Kyūshū. The center of his cult was first and foremost the Usa Hachiman-gū in Usa, as well as five other shrines (gosho betsugū):

However, it was quickly integrated into Buddhist beliefs nationwide as early as the Nara period (ca. eighth century). In the construction of the Tōdai-ji Buddhist temple in 745 in Heijō-kyō (Nara), the capital of Japan at the time, Hachiman is said to have assisted, according to the report of the head priestess of the Shrine of Usa, Ōga no Ason Morime, who had traveled to Heijō-kyō at the time.

Artistic depictions of the following period usually show him as a Buddhist monk, and Shintō shrines to hachiman now increasingly functioned as protective shrines (chinjusha) for nearby Buddhist temples (e.g., Daian-ji, Tōdai-ji, Yakushi-ji, and Tō-ji).

From the late 11th or early 12th century, Hachiman became the clan kami (ujigami) of the noble Minamoto or Genji. In this function, he was worshipped more as a war god, with Buddhist elements receding into the background or being omitted in the depiction. In the following time he developed to the general patron saint of the warrior class (bushi) during the Japanese Middle Ages.

On the 24th day of the fourth month in 1868, in the shinbutsu bunri (separation of Shintō and Buddhism) pursued during the Meiji Restoration, the government issued instructions prohibiting the use of the Buddhist term daibosatsu for hachiman at the shrines of Iwashimizu Hachiman-gū and Usa Hachiman-gū.

Instead, at these shrines he would henceforth be known as Hachiman Daijin (八幡大神; "great kami Hachiman").

The popularity of Hachiman's cult is reflected in the fact that he is venerated in about half of Japan's approximately 90,000 registered Shintō shrines.

Probably the most important festivals (matsuri) in honor of Hachiman are held on or about September 15 each year. An exception to this is January 1. Early in the morning of this day, the Tennō pays reverence to the Iwashimizu Hachiman-gū among other shrines and imperial mausoleums before attending the New Year's ceremonial (Saitan-sai).