Amaterasu (天照) is, in Shintoism, the goddess of the Sun. According to this religion, all Japanese emperors had her as an ancestor. She would have introduced rice growing, wheat growing and silkworms. She appears on the Japanese flag under the appearance of the sun disk, accompanied or not by its rays.

Sometimes the qualifier ōkami (大神) or ōmikami (大御神) meaning "great goddess" is attached to her name. Both the Kojiki and the Nihon shoki refer to this goddess. In the latter, she is also called "Amaterasu-sume-okami" (天照皇大神), literally "great imperial goddess illuminating the sky," signifying her connection to the emperors of Japan. 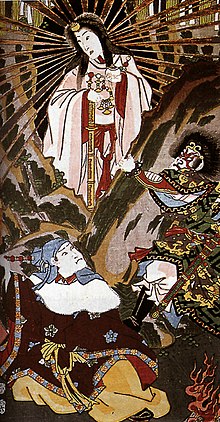 She was born from the left eye of her father, Izanagi, when he purified himself by ablution at the mouth of the Tachibana River in Himuka (present-day Miyazaki Prefecture) after returning from the land of the dead. Izanagi ordered her to rule the Takama-ga-hara, the kingdom of heaven.

According to the legend, Amaterasu and her brother Susanoo, kami of the sea and the wind, were rivals (according to other interpretations, Susanoo was simply endowed with a teasing character which, combined with his sadness at having lost his mother, made him particularly annoying).

So when he visited her, there was a long dispute, as a result of which Amaterasu locked herself in a celestial cave (Amano-Iwato), hiding the Sun for a long time. To persuade Amaterasu to come out of this cave, the gods organized a banquet during which Uzume, the goddess of the Dawn, started a dance.

Intrigued by the laughter and lies of the Amatsukami, who claimed to have found a replacement for her, Amaterasu lightly pushed the large rock blocking the entrance to her cave, then dazzled by the mirror in which she saw herself for the first time, she was pulled out of the cave by the god of strength, Ame-no-Tajikarao, who took her by the hand, while the other gods blocked the entrance with a shimenawa, a sacred braided cord.

As a punishment, Amaterasu banished Susanoo from the kingdom of heaven. To make amends to her sister, Susanoo gave her the sword Kusanagi no tsurugi.

In the shinbutsu shūgō, she is also called by her on'yomi reading, Tenshō-Daijin, and considered sometimes as an incarnation of Dainichi-Nyōrai (Shingon-shū, etc.), sometimes as a personification of the functions that protect the prosperity of those who have faith in the correct dharma (Nichiren-shū).

In the past, there has been much speculation among theologians and others as to the exact nature of Amaterasu, whether she is the Sun as a physical object, the deity of Light (or of all suns), the mitama of the Sun, or an entity outside the Sun controlling the Sun.

Some theories also link her to Himiko from Chinese legends, often supported by manga (e.g. Tenjō Tenge or Osamu Tezuka's Hi no Tori), but they are fiercely opposed by the great Shinto theologian, Motoori Norinaga, who calls them "malignant theories" influenced by Chinese culture, and which he claims are hardly new but unrelated to antiquity.

In the absence of a conclusive theory, it is customary for the Japanese to use the name Ō-tento-sama (お天道様) to refer to the sun of our solar system as a deity, and taiyō (太陽, lit. "big yang") as a physical object.

Amaterasu Links with the imperial family

Through the generations, Amaterasu ("Amaterasu-sume-okami" (天照皇大神), "great imperial goddess illuminating the sky"), is linked to the Emperor of Japan through the Shinto shrine; Ise Shrine and the kamidana (神棚), "house of kami," ōmikami (大御神) meaning "great goddess").

According to the Kojiki, Amaterasu ordered her grandson Ninigi to descend to Earth and rule it, an event called tenson kōrin. To this end, she entrusted him with the mirror Yata no Kagami and the jewel Yasakani no Magata in addition to the sword she had received from her brother.

These three objects became the sacred insignia of the imperial family and were passed on to Jinmu, the first emperor, grandson of Ninigi and ancestor of all Japanese emperors.

According to the Kojiki, Jinmu was born on January 1, 711 BC. During a conflict, Jinmu considers the fact that his brothers lost in front of Nagasunehiko for having fought in the east against the Sun.

Followed by his troops, he decided to land in the east of the Kii peninsula, in the south of Yamato, and to fight with the enemy facing west. Jinmu and his companions defeated Nagasunehiko and won. On February 11, 660 B.C., his coronation as Tenno, emperor, at Kashihara Palace is considered as the founding act of Japan.

From the Meiji Restoration until the end of World War II, the emperor was thus considered a living god whose worship was for that reason a national affair. In the twentieth century, this ancestry was one of the foundations of Japanese Shōwa expansionism and Shinto koshitsu.

In December 1945, however, the Supreme Commander of the Allied Forces promulgated the Shinto directive instituting the separation of religion and state and abolishing subsidies to places of worship.

In his 1946 imperial New Year's proclamation, issued at the request of the occupation forces, Emperor Shōwa affirmed that the belief that he was a god in human form (akitsumikami) was erroneous, without, however, renouncing his divine ancestry.

From ancient times, imperial princesses who were not married became priestesses of the Ise temple which is dedicated to Amaterasu. Kazuko Takatsukasa, one of Emperor Shōwa's daughters, was high priestess from 1974 to 1988. Her sister, Atsuko Ikeda, has since replaced her. )

The Reiwa Era (令和時代, Reiwa jidai, "era of beautiful harmony"), Japan's new era began on May 1, 2019, and succeeds the Heisei Era. The Reiwa era - the two hundred and forty-eighth in the country's history - began the day after Emperor Akihito abdicated the throne with the enthronement of Naruhito, who became the country's 126th emperor from the Yamato lineage by the goddess Amaterasu.

Accompanied by servants wearing the bicorn (a symbol recalling the close ties between the Tokugawa Shogunate and Emperor Napoleon III, officially recalled through the roof of the Miyamoto Musashi Budokan) Emperor Naruhito rides in a horse-drawn carriage on November 23, 2019 for a visit to the Naiku, or inner sanctum, of Ise Jingu Shrine to report to Amaterasu-omikami, the legendary sun goddess, on the completion of her enthronement ceremonies.

The name Amaterasu has been used for several astronomical elements. For example, one of the craters on the satellite Io is named after Amaterasu: Amaterasu Patera (patera in Latin means "cup"). (10385) Amaterasu is an asteroid of the main belt. Finally, the exoplanet Epsilon Tauri b was named Amateru, commonly given to temples dedicated to Amaterasu.

Different elements or entities of video games have received the name Amaterasu. This is the case with the main character of the video game Ōkami, in which she is embodied as a white wolf. It is also the final weapon of Himiko (queen) in the game Warriors Orochi 2: the amaterasu appears as a golden ball spitting flames.

In the game Shin Megami Tensei: Lucifer's Call, Amaterasu is one of the monsters obtainable by fusion and representing a woman all in white and radiating light. In the game Digimon World 2003, it is the name of a server that the opportunists of the game have taken control of.

In the online game SMITE, she is a playable character very similar to her legend, while in the game Bravely Second, Amaterasu is a summoner depicted as a goddess of light in a dark street. In the game Aura Kingdom, she appears as a pet. Finally, Amaterasu is the second persona of Yukiko Amagi in the game Shin Megami Tensei: Persona 4 on PS2.

In different manga and anime, the name of Amaterasu is used to name characters, spells or places. For example, in the manga Naruto, Itachi Uchiwa and Sasuke Uchiwa use a technique of black flames which burns absolutely everything; this is called amaterasu.

On the other hand, in the manga Fairy Tail, Hades uses several variants of a type of spell called Amaterasu. In Sailor Moon (episode 53), Amaterasu is one of the creatures sent by Ail and An to absorb the life energy on Earth.

Asuna Kagurazaka, from the manga Negima, is a princess descendant of Amateru which is the name of the temples dedicated to Amaterasu. In the manga Noragami, Amaterasu is the most important of all the existing gods, she holds the supreme authority of the heavens; it is notably her who is worshipped by all the gods.

A character named Amaterasu makes an appearance in the science fiction series Stargate SG-1 during episodes 8.01 and 8.02: he is a Goa'uld grandmaster.