Yoroi [joɺoi] (jap. 鎧 or rarely 甲) is the Japanese generic term for armor of all types. Although the Japanese term also includes Western-type armor, in European texts it is used only for Japanese armor. 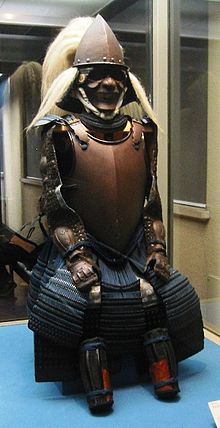 Yoroi is Japanese armor that usually consists of a breastplate, helmet, arm and leg splints, and hand and face guards. This armor is lighter than European variants, but unlike the individually used breastplates, it only occurs in its entirety.

A yoroi was worn only during battle and rarely served ceremonial purposes; palace guards or bodyguards wore only normal clothing. Since the design of the armor varied depending on the soldier's financial means and fighting skills, most armors were very colorful.

First and foremost, Japanese armor served to protect the soldier on the battlefield. Armor had to protect against sword thrusts and stabs, arrows, spear thrusts, and blunt injuries from, for example, kicks or horse blows.

This information refers broadly to the Tōseigusoku form.

The parts of the armor are designed in such a way that it is relatively easy to move around in it to wield a sword. Nevertheless, freedom of movement and sight is severely limited, requiring the use of swords with long handles, called tachis.

The helmet usually has antlers that resemble a stag, an ox, or the pincers of a beetle. These antlers are made of horn or metal and are rather obstructive in man-on-man combat. At the back of the helmet is a neck guard (shikoro) made of metal framework or riveted rings, which is comparable to the neck guard on today's firefighter helmets.

The face mask depicts a belligerent grimace, usually with a beard glued on and visible teeth. This mask is made of metal and provides protection from cuts to the face, but together with the helmet it severely restricts the field of vision.

Below the helmet, many armors have a metal ring on the back suitable for holding a flag pole. Since there were no uniform uniforms and family insignia were difficult to see, almost all soldiers carried their flag in battles to indicate their troop affiliation.

Depending on the design and field of use of the armor, the shoulder plates are larger or smaller. In cavalry, especially large plates are useful for protection against lances and halberds (yari and naginata), foot soldiers prefer small plates, more often shell-shaped pieces that offer more freedom of movement and less attack surface for throwing or grabbing techniques of the opponent.

Splints on arms and legs were light but still effective against enemy sword thrusts. However, they also provided the armor's greatest weakness because they could quickly bend or cant. In addition, individual parts of the arms and legs (such as the calves) were usually unprotected to allow freedom of movement.

The hand guards were basically nothing more than leather gloves with wrist and back covers made of metal.

The simplest yorois were mainly made of cotton and leather. More exposed areas were reinforced with bamboo plates. Such armor was cheap and light, its durability was rather moderate, and it offered little protection in battle. Bamboo, which is very light, can be excellently bent spherically over a flame.

Unlike European scale armor, however, these platelets point upward and are tightly knotted with cotton yarn or wire. This increases its resistance to cutting. At the same time, it further reduces the risk of the armor plate simply breaking under weapon hits.

However, to protect against moisture, it is necessary to cover the plate with varnish, which only a few soldiers could afford. These armors were used by poor peasants and soldiers, whose only task was to repel the onrushing cavalry with long spears and lances (yari). They have practically no protective effect against musket fire.

Richer soldiers (usually samurai) were able to buy expensive armor with metal armor or even have it custom-made. Although luxury versions of yoroi also consisted of a lot of cotton and leather, the breastplate and helmet were made of metal (usually hardened sheet metal and steel), bracers were made of metal wrapped in leather, and less protected areas were at least covered with metal plates, similar to scale armor.

Fighting against metal armor and fighting against bamboo-reinforced fabric armor are fundamentally different. While a sword is more likely to slide off metal armor, the attacker must expect the edge of his sword to penetrate the bamboo plates and get stuck there.

The shape and orientation of the platelets (which point upward and protrude several inches) favors this, since the strongest blows come from above. In this situation, the soldier must absolutely rely on the recovery of his weapon or draw a replacement weapon.

It must be remembered that the fund of an army outnumbers the samurai. Since this feature is an enormous advantage in battle, many metal armors were additionally equipped with larger wooden deflectors in the lateral shoulder area, which were knotted on and could be easily thrown off if necessary by loosening the lacing.

Samurai often fought together with their squire, with whom they also lived and formed a well-rehearsed team. However, the portrayals of heroes in modern movies, for example, almost never show these squires, so this fact is little known.

Attention must also be paid to the bullet resistance of both forms of armor. Since the muzzle-loading musket became very popular in the 16th century, the armor had to be designed against it. Metal armor was as good as bulletproof at over 100 meters by the 17th century.

Even with armor, a fast runner would manage to cover this distance before the gunners could reload. Moreover, firearms, especially matchlock rifles long in use in Japan, are only good for one shot in wet weather (eight months of the year!), and not even that can be considered reliable. Wooden reinforced armor is useless against muskets.

Despite the relatively light construction of Japanese armor, it is a highly complex form of protection for the weaponry of medieval and early modern Japan. Most historical schools of combat and martial arts incorporate many techniques for defeating an opponent in armor.

Even today, many "armor breakers" can be found in Aikido, for example. Similarly, in Bujinkan Budo Taijutsu (BBT), techniques designed to defeat opponents in armor can be found in virtually all schools. Techniques with weapons fixate on specific hit zones, such as the calf, buttocks, throat, hands, or armpits.

All of these points are relatively easy to hit. Weaponless techniques aim at breaking the "skeleton" of the armor, i.e. canting, hooking the bracers, playing pieces of armor against each other, etc.

This is the actual weak point of the Yoroi, namely the susceptibility to unround movements, i.e. to hooking, canting and breaking or bending.

Another weak point is - as with all armor - the weight. Once a soldier was down, it took him a relatively long time to get up again. Those seconds could cost him his life, so at times it made more sense to stay down and play dead, waiting until the end of the battle.

It was also easy to get off balance. A fist hit on the face mask could be fatal if a mask that was too pointed bored into the wearer's face; if armor was bent, it was no longer possible to move in it. If parts such as the shoulder plates were bent, they no longer offered protection.

Back to Japanese History