Bōsōzoku (Japanese 暴走族; literally 'brutal running tribe') are a Japanese subculture similar to Western tuning clubs: groups of mostly young men who share a common interest in modifying their cars and motorcycles (often without permission). The modifications to the machines often involve the removal of sound deadening parts to make the engine sounds more audible.

The criminologist Joachim Kersten describes the phenomenon of bosozoku as a subculture of Japanese youths with a tendency toward deviant social behavior.

Ikuya Sato, who himself belonged to such a group in Kyoto for several years and studied the milieu in systematic observations and numerous surveys, also speaks of a subculture of the kind encountered in related forms in other countries.

The "life-style" form of bosozoku typical of Japan spread rapidly throughout the country from the 1950s onward, initially affecting mainly young men between the ages of 15 and 21, primarily from socially disadvantaged social classes. For Sato, the slide into deviant behavior and criminal group rituals conceals sociopolitically based social problems.

In addition, according to his conception, there is the rebellious carrying out of a generational conflict, the protest behavior of a youth that consciously wants to set itself apart in its goals and norms from those imposed on it by adults:

"The name bososoku means 'tribe of wild drivers' or 'tribe out of control,' and this name corresponds to the character image that both gang members and outsiders have of the participants in the so-called races, the most important activity of this group.

In contrast to the European street races, which are held in Europe, the bososoku is the name of a group of young people with a strong sense of identity.

In contrast to European street races, which are largely unprotected and take the form of individual driver duels, Japanese bosozoku drivers race through the nighttime inner cities in larger groups. They subject themselves to strict rules, including safety rules.

For example, the lead machine, which sets the (variable) route, may not be overtaken. Accompanying cars keep the way clear for the parade by intimidating other road users with horn blasts, engine noise and dazzling headlights. A rear guard uses ketsumakuri (tail wagging) across the entire width of the road to prevent police vehicles from intruding into the racing action.

In addition, the bosozoku is characterized by artistic interludes such as a flying driver change (raidaa chenji), sparking by grazing the pavement or curb with the machine (hanabi) or artful zigzag driving (vonshasen kama).

The bosozoku also go on rides with risky driving, such as switching back and forth from one side of the road to the other, ignoring traffic lights on red, even without wearing helmets. Police in Japan call them maru-so (police code: マル走).

Among their activities is the so-called shinai bōsō (市内暴走), the deliberate breaking of the speed limit. It is not a true race, as typically held for the thrill of it, not to elevate a fastest.

With a large number of cars (or motorcycles) involved, the leading one is manned by the sentōsha (先頭車), the leader in charge of the event. No one is allowed to overtake him. Other drivers keep an eye out for vehicles from behind or to the side.

Although bosozoku also race, some groups prefer to drive the bare bōsō, "brutally." The groups tune their exhaust systems to be particularly loud and drive through suburbs at speeds of between five and ten miles per hour, waving Imperial Japanese flags and loudly uttering obscenities.

Occasionally, members of the groups have also been known to throw incendiary bottles and carry swords/spears, provoking onlookers.

Bōsōzoku members tend to be perceived as criminals and outsiders; it is commonly said of bosozoku groups that they are yakuza recruiting grounds. Only isolated bosozoku members are older than twenty, as they are then considered adults under Japanese law and risk a criminal record; they are also seen as immature and childish.

The groups first appeared in the 1950s, when Japanese youth could increasingly afford cars and motorcycles. The first Bōsozōku became known as kaminari-zoku (雷族, "thunder gangs").

There are Bōsōzoku clubs throughout Japan, even female motorcycle cliques that identify themselves through fashion and customized motorcycles. Members participate in mass rallies and have gang wars among themselves. As a fashion and youth subculture, Bōsōzoku are a target of increasing government and police pressure.

According to Sato, the most common interpretations in Japanese publications point to the acting out of an urge to express one's frustration. The gang behavior, generally rejected as criminal, is seen as an outlet to act out negative feelings.

Sato quotes the psychologist Kaneto: "They are aware of being outside society and now try to satisfy their need for recognition and a positive sense of self through racing, which remains unsatisfied at school or at work.

However, he already points out that these statements about the problem are mere 'conjectures' that lack empirical research and firm evidence.

Sato's own analyses, based on interviews with 1224 adolescents, revealed that the terms spiido (speed) and suriri (excitement) appeared repeatedly in the interviews, and he concludes that racing is experienced as asobi (play), an intrinsically pleasurable activity. In contrast, the terms "frustration" and "inferiority complexes" are attributed to bosozoku members as motives exclusively by outsiders.

According to Sato's account, the races of the bosozoku, which are run according to strict rules, are not only sought and experienced as a thrill, but are used as an opportunity to experience a higher state of consciousness and a strengthened sense of self.

The playful nature of bosozoku rituals is also seen as the main motive by dare researcher Siegbert A. Warwitz. He notes a number of parallels, but also differences, to the German "crash kids" and the English "speed boys" and their street races that he specifically studied, and speaks of a "flow experience" that is repeatedly recognizable in the statements of the interviewees:

Stunned by the thunder and roar of the machines and the exhaust fumes of the engines, they fall into a state of intoxication. They see themselves as daredevils with a desire to take risks and overcome dangers. According to Warwitz, however, it is not the search for danger that is in the foreground for them. The physical and socio-criminal threats are not ignored.

They are present and part of the adventure game. But they are seen only as a necessary 'vehicle' to challenge one's abilities and test one's personal problem management.

Awareness of competence, skill, and control is sought, giving self-confidence and feelings of happiness. In the process, certain safeguards are built in and the danger of being overwhelmed and delivered to an unpredictable fate is contained:

""What appears to the superficial observer as a primitive search for physical risk, as an addiction to the thrill, as the acting out of an inferior desire for recognition, as irrational audacity, as a wanton endangerment of life, deciphers itself to the serious investigator on closer analysis as a method of identity discovery typical of youth, as an attempt by adolescents to sound out themselves and their friends in their potentials and limits.  The risk seems necessary to challenge and prove one's own ability. The awareness of danger plays a subordinate role to the feeling of ability, competence, and control of the situation that brings about the flow.""

- Siegbert A. Warwitz: When Dare Turns into Feel Good

The pleasurable adventure game of being chased by the police and outsmarting the omnipotence of society represented by them under the protection of the group is part of the pleasure that gratifies.

The experience of being able to live out a certain feeling of efficiency and self-confidence in a community of like-minded people and of being comfortably suspended in a kind of collective intoxication gives a feeling of elation which, although it certainly also desires external attention, mainly enjoys the immediate confirmation in the peer group and is largely absorbed in the self-rewarding autotelic experience.

It is a creative form of building up and experiencing, at least temporarily, a heightened sense of self, a kind of heroic self-image, of oneself via artistic ability and group discipline as well as a shared experience of intoxication."

Bosozoku Stereotypes and representation in the media 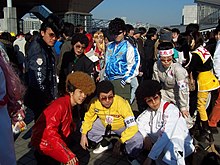 The stereotypical Bōsōzoku getup is often portrayed and caricatured in some of Japan's media (for example, anime, manga, and film).

The image that the media reproduces often shows Bōsōzoku members in a uniform of overalls or a tokko-fuku (特攻服), a military overcoat with sayings in kanji characters, usually worn open and without a shirt underneath, exposing bandaged torsos and baggy pants tucked into large boots.

Tokko-fuku means "special attack uniform," in reference to the uniform worn by kamikaze pilots. The uniforms are often decorated with military slogans, patches of the "Rising Sun," ancient Chinese characters, or even manji swastikas. Members of the group often tie on a tasuki, a sash looped around the torso in an X, inspired by Japanese World War II pilots.

Leather jackets are often adorned with club/gang logos, and even entire full leather suits appear as elements of the bosozoku look.

Among other things, bosozoku attire also features round or wraparound sunglasses, long hachimaki headbands with battle slogans, and a pompadour hair style that most closely resembles that of "greasers"/"rockers" and is also associated with yakuza mobsters.

The "punch perm" hairstyle, a type of perm, is considered a common Bosozoku hair style. Breathing masks are also popularly worn, with the effect that they conceal the identity of their wearers and do not cause a stir in Japan (such masks are also worn by allergy sufferers, especially in autumn).

Bōsōzoku are known to modify their motorcycles in peculiar, eye-catching ways. A typical modified Bosozoku motorcycle was originally your average Japanese street bike, combining elements of American choppers with those of British cafe racers:

For example, full fairings seen on "cafe racers" meet raised hand grips like choppers have. Bright paintwork with motifs such as flames or the rising sun in kamikaze style is widespread.

Often the vehicles are decorated with stickers or flags showing the gang logo or symbol.

There are regional peculiarities: Ibaraki bosozoku, for example, are known for making their motorcycles brightly colored (bright yellow or pink, for example). They often have three or four fairing shells arranged in a tower-like fashion. There are also decorations that resemble Christmas lights.

The second means of transportation of the groups are cars, which are similarly modified. Four-door sedans are usually preferred, among which two types of body styling are the most common:

The VIP style (lots of metal, widened, with ducktail spoiler and lower suspension, extravagantly styled interior) and the Group 5 style (Wide body extension similar to its 1970s counterparts from the racing scene).