The Satake clan (佐竹氏, Satake-shi) is a Japanese samurai clan that claims descent from the Minamoto clan. Its first headquarters is in Hitachi province.

The clan was subdued by Minamoto no Yoritomo at the end of the xi century and later put itself in the service of Yoritomo as a vassal. In the Muromachi period, the Satake served as military governors (shugo) in Hitachi province (nowadays Ibaraki prefecture) under the Ashikaga shogunate.

The clan sided with the western army at the battle of Sekigahara. It was punished for this by Tokugawa Ieyasu who sent it to a smaller territory in the northern part of Dewa province (north of Honshū) in the early Edo period.

There, the Satake were daimyōs of the Kubota domain (also known as the Akita domain). During the Edo period, two important branches of the Satake clan were created, one governing the fief of Iwasaki and the other the fief of Kubota-Shinden.

During the Boshin War of 1868-1869, the Satake were signatories to the founding pact of the Ōuetsu Reppan Dōmei, but after internal debates and a disagreement with the Sendai domain, the clan switched sides and joined the imperial forces to suppress the alliance.

Like all families of daimyōs, the Satake clan was stripped of its titles in 1871.

The Satake clan claims to be descended from Satake Masayoshi, grandson of the famous warrior of the xie century, Minamoto no Yoshimitsu. Yoshimitsu received land in Mutsu and Hitachi provinces as a reward for his military services and settled in Satake village in Hitachi.

Yoshimitsu bequeathed to his son, Yoshinobu, the territory around Satake. Yoshinobu, in turn, passed it on to his own son, Masayoshi. The Satake clan remained in Hitachi until it was ordered to leave in 16022.

In 1106, Masayoshi led a revolt against Minamoto no Yoshikuni, a powerful personage in the neighboring province of Shimotsuke, but he was defeated and killed by Yoshikuni who pursued him to Hitachi.

During the Genpei war, Takayoshi, Masayoshi's son, sided with Taira no Kiyomori. The Satake clan was defeated by Minamoto no Yoritomo in 1180 and its territory confiscated.

It took no less than nine years for Yoritomo to forgive Takayoshi's son Hideyoshi and allow him to become his vassal. Hideyoshi served in the attack of Mutsu province. Later, the Satake clan returned to its former territory of Hitachi.

During the Muromachi period (1336-1573), the family heads of the clan serve as hereditary governors (shugo) of Hitachi province.

They are vassals of the Kamakura-kubō of the Ashikaga shogunate, the Kamakura-based high-ranking official who oversees the affairs of the shogunate in the Kantō region.

The Satake clan participated in a number of military actions under the Ashikaga banner.

During the Sengoku period, the Satakes worked to unify the often rebellious clans of the Hitachi region under their control. Satake Yoshishige, head of the family in the early Sengoku period, is known for his ferocity in battle; he is also known by the nickname "Yoshishige the Ogre" (鬼義重, Oni Yoshishige).

He often fought against the Go-Hōjō clan, which was expanding its power south of Hitachi, for example at the Battle of Numajiri, where 20,000 men under Yoshishige's command confronted the 80,000 men of the Hōjō.

The Satake prevailed, thanks in part to the more than 8,600 platinum wick rifles of their troops.

In 1588 and again in 1591, the Satake clan faced the Date clan at Sukagawa but were ultimately defeated by forces led by Date Masamune.

In 1590, under the leadership of Satake Yoshinobu, Yoshishige's son, the Satake clan swore loyalty to Toyotomi Hideyoshi during the siege of Odawara.

After the fall of Odawara, Hideyoshi accepted him as a vassal and assured him the sovereignty of a strip of territory worth 540 000 koku in the province of Hitachi. Hideyoshi having recognized Yoshinobu as the lord of Hitachi Pro province, his effort to unify the province under his authority was strengthened.

He brought almost the entire province under his rule, with the exception of the Tsuchiura and Shimodate areas, which Hideyoshi guaranteed control to the Yūki clan.

In 1593, the Satake clan participated in the Japanese invasion of Korea, and deployed its troops at Nagoya Castle in Hizen Province. 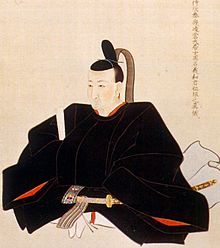 In 1600, the Satake sided with the western army at the battle of Sekigahara but it turned out that they were in secret communication with Ishida Mitsunari, the leader of the western army.

After the defeat of the latter against the eastern forces of Tokugawa Ieyasu, the Satake clan was allowed to continue but was punished.

Its level of income was severely reduced, and in 1602 its territories were moved to the domain of Kubota, a much smaller fief in northern Japan, where it remained until 1871.

Kubota's income was 205,000 koku and the Satake clan was classified as a tozama daimyo ("daimyo of the outside world"). Throughout its existence, its income level remained constant.

The estate experienced regular agricultural crises that led to several peasant revolts throughout its history. It is also plagued by internal conflict o-ie sōdō, the "Satake disturbance" (佐竹騒動, Satake-sōdō), sparked by financial issues.

Satake Yoshiatsu (better known by his pen name "Satake Shozan"), the 8th generation daimyo of Kubota, is an accomplished artist.

Yoshiatsu painted in the Dutch style and wrote three treatises on European painting techniques, including the description of perspective.

He was also a student of the scholar Hiraga Gennai, a specialist in "Dutch studies" (rangaku), whom he invited to Akita to advise him on the management of the estate's copper mines.

It was during Yoshiatsu's lifetime that the Akita school (秋田派, Akita-ha) was briefly born and flourished.

The Kubota estate is unique in that it has more than one castle despite the Tokugawa shogunate's rule of "one castle per estate."

The main castle is Kubota, but there are also castles in Yokote and Ōdate, and five fortified residences elsewhere in the domain: Kakudate, Yuzawa, Hiyama, Jūniso, and In'nai.

Two of the ancient karō families of the clan serving the Kubota estate are branches of the Satake family.

The western Satake remain in their possessions around Ōdate. The Tomura family is another karō family, unrelated to the Satake, who owns Yokote Castle.

During its governance of the Kubota domain, the Satake clan is classified as a daimyo possessor family in the provinces (国持ち大名, kunimochi daimyō) and, as such, possesses the privilege of shogunal audiences in the great hall (Ohiroma) of Edo Castle.

Although no Satake lord ever held office in the shogunate, the clan (along with many other domains in northern Honshū) aided the shogunate by maintaining order in the border region of Ezochi (nowadays Hokkaido). 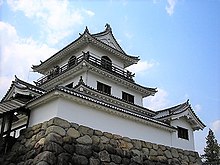 After the restoration of the imperial government at the end of 1867, the Boshin War which broke out in early 1868 brought together the coalition of the southern domains and the forces of the former Tokugawa shogunate.

After the fall of Edo, the rest of the Tokugawa forces retreated to the north where the fighting continued.

The Satake clan was a signatory to the pact that gave rise to the Ōuetsu Reppan Dōmei, an alliance of the northern domains-headed by the Sendai domain-opposed to the Satchō alliance of southern domains.

The Satake clan's delegation to Shiroishi Castle, the alliance's headquarters, is led by the clan's eldest karō, Tomura Yoshiari.

The Satake, however, encountered political difficulties with the alliance, difficulties that reached their climax with the assassination in Akita of a delegation from the Sendai domain on August 21, 1868 and the display of the heads of the delegates in the castle town.

The Sendai delegation led by Shimo Matazaemon was sent to request that the Akita estate hand over Kujō Michitaka and other officials from the imperial delegation, who had initially been sent to the area to gain support for the imperial cause.

The Satake were sent to Akita to be killed. The Satake then withdrew from the alliance and supported the imperial army. Eleven days later, on September 1, 1868, the Tsugaru clan of the neighboring Hirosaki domain followed suit.

In return, the pro-alliance domains of Morioka and Ichinoseki sent troops to attack Kubota. Kubota's forces struggled to defend their territory with the result that the alliance troops made serious advances before the war ended.

Yokote Castle was burned, and on October 7, troops from the Morioka estate took Ōdate, one of the castles of the Akita estate.

The war was over. In early 1869, Satake Yoshitaka formally handed over the castle records to the imperial government and then was appointed imperial governor of the Akita domain (han chiji).

In the middle of 1869, the imperial government rewarded the services rendered by the main line of the Satake clan by raising its income by 20,000 koku. The chiefs of all the branches of the clan were given the right to vote.

The heads of all branches of the clan were removed from their daimyō positions in 1871, and ordered to move to Tokyo.

Meiji Era and Beyond

During the reorganization of the Japanese nobility system (kazoku) during the Meiji era, Satake Yoshitaka was knighted with the title of marquis (kōshaku).

Yoshinao, Yoshitaka's son, served in the Imperial Japanese Army and fought in the Satsuma Rebellion.

Satake Clan Heads of the family

As a daimyo of the Kubota domain