Watanabe no Tsuna (渡辺 綱, 953-1025) was a Japanese samurai, obligated to Minamoto no Yorimitsu (also known as Raikō), one of the oldest samurai renowned for his military exploits.

Watanabe no Tsuna According to the legend

Watanabe appears in many of Yorimitsu's legendary adventures and assists him in his battles against the many monsters, beasts and demons.

In one of these tales, Tsuna accompanies Raikō to the hut of Yama-uba, a man-eating witch. There they find a boy named Kaidomaru who was raised among animals and endowed with superhuman strength. The boy asks that Raikō allow him to become one of his servants and Raikō agrees, giving the boy the name Sakata no Kintoki, often abbreviated to Kintoki.

Watanabe no Tsuna's companions in the legend include Urabe no Suetake and Usui Sadamitsu. They are collectively called the Four Heavenly Kings, an allusion to the Buddhist shitennō.

Watanabe is also reputed to have helped Raikō slay a tsuchigumo. His most famous feat is probably the defeat of the demon Ibaraki-dōji, Shuten-dōji's main disciple. He confronted Ibaraki-dōji with his bare hands at the Rashomon Gate at the southern end of Suzaku-oji, the central north-south street in the ancient capital Heian-kyō (now Kyoto).

At the end of the violent battle, Watanabe no Tsuna cuts off the demon's arm before it flees. Tsuna imprisons the demon's arm in a Chinese box (唐櫃). The demon later returns to retrieve his arm and tricks Tsuna into releasing the limb. This legend continues in a Japanese tale called Ooeyama. 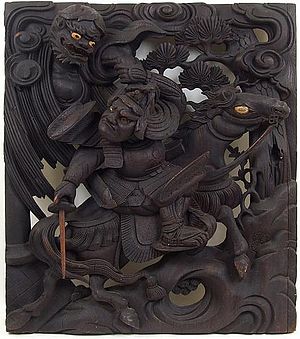 According to a legend from the late tenth century of the Heian period, Ibaraki-dōji, a well-known oni, resides in the Rashomon Gate in Kyoto. Ibaraki-dōji harasses those who try to pass through the gate until a heroic samurai named Watanabe no Tsuna, a loyal servant of Minamoto no Raiko, decides to subdue the cruel Ibaraki-dōji.

When Tsuna arrives at the Rashomon Gate, he is attacked by Ibaraki-dōji. However, Tsuna is a strong and valiant sword wielder who is able to defend himself against the fierce oni's attack.

The battle rages on until Tsuna draws his katana and severed the demon's arm. Screaming in pain, the demon runs away, leaving his severed arm at the Rashomon gate. Tsuna holds up Ibaraki-dōji's arm as a trophy. When he returns home, he wraps the severed arm and puts it under lock and key in a safe.

A few days later, an elderly woman who appears to be Tsuna's Aunt Mashiba visits him. During the conversation, the aunt asks her nephew to tell her how he fought with the demon and when Tsuna mentions that the severed arm is in his possession, his aunt, curious, asks to see it.

Unsuspecting Tsuna pulls out the chest with Ibaraki-dōji's arm inside and when he removes the arm from the chest, his aunt is revealed to be Ibaraki-dōji in disguise, who grabs the arm and escapes from Tsuna's house.

Astonished that Ibaraki-dōji had impersonated his elderly aunt Mashiba, Tsuna does not pursue him. However, even after recovering his arm, Ibaraki-dōji never returns to haunt the Rashomon Gate again.

Watanabe-no-Tsuna was armed with one of the most famous swords of early samurai history, a tachi called Sun-nashi ("Missing Sun") with a length of 2 shaku and 7 cun (about 81.8 cm), forged by the great Munechika, with the help of Hachiman Daimyōjin, according to what legend relates.

One of the two oldest known swords used to perform a tameshi giri, it has changed nicknames and owners several times.

Tomokiri ("Killer friend" or "Equal cutter"), for having cut, by his own will, the steel of another high quality sword, Hizamaru, forged at the request of the emperor of Japan, by a blacksmith rival of the Sun-nashi maker.

The nickname Higekiri ("Beard cutter") was earned when the blade decapitated a criminal, the oldest known tameshigiri, performed at the hands of Minamoto no Mitsunaka (Raiko's father). The victim had a long beard that was cut smoothly along the neck.

The nickname Onikiri ("Demon Slayer"), comes from the incident of Ibaraki Dōji's severed arm. Shishi no ko ("Lion Cub") comes from a legend where she emitted the roar of a lion roaring in the night, as if possessed by some yōkai.

And Tomokiri again, after again, by her own volition, cutting a copy of her blade and shortening it to be the same size. A similar story exists for Onimaru Kunitsuna, one of the Tenka-goken.

Inherited from the Settsu Genji lineage of the Minamoto clan, prized and used in battle by famous heroes such as Raiko, Tsuna, Minamoto no Yoshiie and his son Tameyoshi, it was Raiko who gave Higekiri to Watanabe no Tsuna, a trusted friend and general. Raiko's nephew later inherited it and it was passed on in the Settsu Genji family.

Unfortunately, it seems that neither Hizamaru nor Onikiri exist anymore.

Watanabe no Tsuna In popular culture

The 1958 historical fantasy novel Teito monogatari by folklore researcher Hiroshi Aramata contains a dramatic scene that is a direct homage to Watanabe no Tsuna's encounter at Modori Bridge.

In the story, Meiji-era writer Kōda Rohan rushes to stop the oni Yasunori Katō (en) from flying away with an innocent young girl. He grabs Katō by the legs but is lifted into the air with him. Willing to do anything to free himself, Rohan whips Katō with his short sword and falls to the ground holding Katō's severed arm.

In the first film adaptation of the novel, there is a scene at the beginning where an artist at a local festival describes the story of Watanabe no Tsuna to an audience, foreshadowing Koda's encounter with Katō. Similarly, in the scene corresponding to this adaptation, before Katō disappears into thin air, his face changes into a demonic one revealing his true nature.

Watanabe no Tsuna In netsuke

There is a netsuke made by the famous 19th century engraver Otoman, representing Watanabe no Tsuna and the demon of Rashomon. This work is inspired by a little known legend of the struggle of the famous samurai with a demon transformed into a girl.

One day, the chief sends the samurai Watanabe no Tsuna to a village with a mission to fulfill. After completing the mission, Tsuna decides to return to the city as soon as possible.

It is already dark when he approaches the bridge and sees a pretty girl who asks the gallant samurai to take her home because it is late. Tsuna puts the girl on his back and gets ready to leave.

Suddenly, the girl becomes a terrible demon who grabs Tsuna's hair and whispers, "My home is in Mount Atago." The samurai does not lose courage, he quickly takes out his sword and cuts the leg of the demon. The monster disappears into the darkness, screaming. Tsuna picks up the trophy but loses it on the way back.

The sculptor skillfully reflects this subject in the netsuke presented. The sudden attack of the demon does not catch the brave warrior unexpectedly.

With one hand he holds the demon's wrist firmly and with the other he draws his sword from its sheath. The temptress' face and body change beyond recognition and only the coquettish gesture of holding the edge of the cloak reveals her feminine essence.

The piece is truly unique. It is the only netsuke in the world bearing the master's signature. The history of the appearance of this netsuke on the antique market is very interesting. In 1983, the German collector Klauss Reiss bought this netsuke which he believed to be an okimono for 2,500 Deutsche Marks at the Munich Antiques Fair.

The seller said he had exchanged the okimono for Japanese bronze statues. Upon returning home, Klauss Reiss unexpectedly discovered that the stand of the okimono he had just purchased could be separated from the object. After separating it, the collector discovers the signatures of Himotoshi and Otomon.

When another collector, Barry Davis, discovers this netsuke, he offers Klauss a large sum of money, the amount of which is not known. Subsequently, the piece changed ownership several times before coming into the possession of Ukrainian collector Boris Filatov. In 2009, this work is the most expensive netsuke on the world antiques market.