His father entrusted his education to various instructors who introduced him to the arts, kenjutsu (Japanese swordsmanship), martial arts, politics and government philosophy; it seems that already at a young age he would have demonstrated considerable charisma, great leadership skills and keen intelligence.

The Mito line, although one of the three original branches of the family founded by Tokugawa Ieyasu (Gosanke), lost importance after the foundation of three other branches by Tokugawa Yoshimune (Gosankyo), and under pressure from his father was adopted by the Hitotsubashi family,

of the Gosankyo branch, increasing the position in the hereditary line of the Tokugawa clan and therefore of the shogunate. Upon reaching maturity he assumed the name Keiki.

Upon the death of the shōgun Tokugawa Iesada in 1858, Keiki's name began to be sounded for succession, as he had given evidence of discreet abilities as daimyō of Mito and head of the Hitotsubashi Tokugawa clan;

but a faction led by Ii Naosuke succeeded in gaining Tokugawa Iemochi accession to the shogunate, becoming the 14th Shōgun, and Keiki and his supporters were placed under house arrest.

After Naosuke's assassination in 1860, the situation changed, and in 1862 Keiki became a member of the Rōjū, the five-member council that advised the shōgun on his decisions.

During this period, Keiki had to deal with rebellious movements in the Chōshū fief and foreign policy; in 1864 he succeeded in preventing the Chōshū rebels, allied with Aizu and Satsuma, from getting past the gates of the imperial building, in what became known as the Hamaguri Gate Rebellion (蛤御門の変 Hamagurigomon no Hen).

In 1866, the shōgun Iemochi falls ill and dies, leaving the bakufu (government) very weak and losing control, with no successor competent enough to save the government.

Tokugawa Keiki was endorsed by all the Tokugawa and their allies as the only person with the requisite skill and experience to accede to the office. Tokugawa Keiki became the 15th Tokugawa Shōgun in 1866, under the name Tokugawa Yoshinobu.

Soon after Yoshinobu's ascension to shōgun, essential changes were initiated. A thorough overhaul of the government was undertaken to initiate reforms that would strengthen Tokugawa rule.

In particular, assistance from the French Second Empire was arranged, with the construction of the Yokosuka arsenal under the orders of Léonce Verny, and the dispatch of a French military mission to modernize the armies of the bakufu.

A national army and navy were formed, and the prospect was that the Tokugawa Shogunate was gaining ground through renewed forces and power.

Fearing the renewed strengthening of the Tokugawa under a strong and wise command, the daimyō of Satsuma, Chōshū and Tosa formed an alliance to counter the bakufu.

Under the slogan of sonnō jōi and the radicals' fear of the new Shogun as the "rebirth of Ieyasu" who would usurp the Emperor's power, they waged the Boshin War against the Tokugawa bakufu, gaining widespread support from other daimyos.

After a massive number of losses by the Tokugawa, Yoshinobu admitted that the Tokugawa could not win the civil war, and that Japan needed to be more united with the more powerful foreign powers. 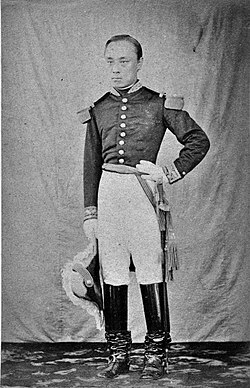 In 1867, Yoshinobu resigned as shōgun and gave all power to the Emperor. Arguably, many of the powers, duties and responsibilities of the previous shōgun were taken over by men who were known as the "Three Great Nobles" of the early Meiji era: Okubo Toshimichi, Saigō Takamori and Kido Takayoshi.

After his defeat at the Battle of Toba-Fushimi (between January 27 and January 31, 1868) Yoshinobu surrendered and handed over Edo Castle (and thus the city of Edo) to the imperial forces; he was immediately placed under house arrest, and stripped of all his titles, lands and powers.

His adopted successor was the young Tokugawa Iesato, then known as Tayasu Kamenosuke. He was later released, when he showed no interest or ambition in national affairs. He retired to Shizuoka, where Tokugawa Ieyasu, the founder of the Tokugawa Shogunate, had also retired.

In his retired life, Yoshinobu indulged in many hobbies, such as oil painting, archery, hunting and photography. Some of Yoshinobu's photographs were published a few years ago by his great-grandson, Yoshitomo.

In 1902, Emperor Meiji allowed him to reestablish his own house as a Tokugawa branch (bekke) with the highest of noble titles, that of prince (kōshaku), for his loyal service to Japan. Prince Tokugawa Yoshinobu Tokugawa died on November 22, 1913, at 4:10 p.m.

Eras of the Yoshinobu bakufu