Takasugi Shinsaku (高杉 晋作 Nagato Province, Japan, September 27, 1839 - Shimonoseki, Nagato, May 17, 1867) was a samurai belonging to the Chōshū domain who contributed significantly to the Meiji Restoration in the late Edo period.

He is primarily known for having been the founder and leader of the Kiheitai. He used the alias Tani Umenosuke (谷 梅之助) to conceal his shogunate activities. 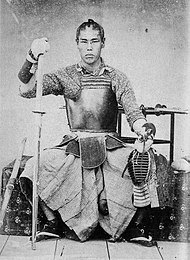 Takasugi was born on September 27, 1839 in what is now known as Hagi City, Yamaguchi. Hagi was the capital of the Chōshū domain. He was the eldest son of Takasugi Kōchuta, a middle-ranking samurai of the domain.

He became ill with pemphigoid when he was about ten years old, but managed to recover. During his youth he studied classics of Chinese literature, swordsmanship and kendō.

Takasugi joined the Shoka Sonjuku, the famous private school of the intellectual Yoshida Shōin. He devoted himself to the modernization of the Chōshū army and soon became one of Yoshida's favorite students.

In 1858, he entered the Shoheiko (a military school under the direct control of the Shogun in Edo), but would return to Nagato in 1859 by order of the clan.

Takasugi, despite his young age, was an influential factor within the Chōshū as one of the most extreme advocates of the Sonnō jōi, a policy of isolation and expulsion of foreigners in Japan. Takasugi was also implicated in the December 12, 1862, attack on the British legation in Edo.

In 1860, shortly after his return to Nagato, he married Inoue Masa, the second daughter of a domain judge.

In 1862 and despite the Sakoku, a foreign relations policy that forbade entry into or departure from the country, Takasugi received orders to travel undercover to Shanghai to investigate the affairs of state and the strength of the Western powers.

Takasugi's visit coincided with the Taiping rebellion and he was horrified to witness the effects that European imperialism had had on the Chinese Empire. Takasugi returned to Japan convinced that the country must be strengthened to avoid being colonized by Western powers or suffer a fate similar to that of China.

His growing ideology coincided with the increasingly popular sonnō jōi (reverence the Emperor, expel the barbarians) movement, which attracted certain radical sections of Japan's warrior class and court nobility, and Takasugi's ideas found support in Chōshū and other parts of the country.

Takasugi devised the formation of an auxiliary revolutionary militia known as the shōtai. Under the feudal system, only the samurai class was allowed to own weapons, but Takasugi promoted the recruitment of commoners into new mixed paramilitary units.

In these units, recruitment and promotion did not depend on social status. Farmers, merchants, carpenters, and even sumo wrestlers and Buddhist priests were enlisted, although samurai were still the majority in the shōtai. Takasugi saw that the financial wealth of middle-class merchants and farmers could increase the military strength of the domain without weakening its finances.

Since the Chōshū leaders were unable-and unwilling-to change the social structure of the domain, the limited use of peasants and commoners allowed them to form a new type of military without disrupting traditional society.

In 1863, Takasugi himself founded a new special shōtai unit under his direct command, the Kiheitai, consisting of 300-400 soldiers (about half of whom were samurai). However, because of his sonnō jōi propaganda, Takasugi was imprisoned by the domain authorities after a civilian coup in Kyoto in the summer of 1863 threatened to jeopardize the Chōshū's leading role in national politics.

Despite his imprisonment, Chōshū soon had no choice but to return to Takasugi. After the dominion fired on Western warships in the Kanmon Strait on June 25, 1863, British, French, Dutch, and American naval forces bombarded Shimonoseki, the main port of the Chōshū domain, an event that would later be called the Shimonoseki bombardment.

This was followed by the landing of French marines. The French engagement against Chōshū military units demonstrated the inferiority of traditional Japanese troops against a Western army, and convinced the domain leaders of the absolute necessity for military reform.

The domain administration summoned Takasugi to not only carry out this reform as director of military affairs, but also-at the age of 25-he was tasked with negotiating peace with the four Western powers.

In light of the humiliation of the Chōshū forces against the Western powers, Takasugi knew that direct confrontation with foreigners was not an option. Instead, Japan had to learn tactics, techniques, and embrace military technologies from the West. Takasugi reorganized the Kiheitai by arming the unit with the latest models of modern rifles and introduced Western training and tactics.

In addition, Takasugi used his influence with the sonnō jōi movement to promote a more conciliatory policy toward the West and thus, the "movement to expel the barbarians and venerate the Emperor" became an anti-Bakufu movement with the overthrow of the Tokugawa shogunate as a necessary means to strengthen Japan against foreigners.

Weakened by the punitive attack of the Western powers, Chōshū was unable to resist an expedition mounted by the Bakufu in the autumn of 1864, in retaliation for Chōshū's earlier attempts to take control of Kyoto.

At first, conservative forces, which favored conciliation with the Bakufu to secure rule, dominated Chōshū politics and, Takasugi and some of his compatriots were forced to leave the domain to avoid imprisonment.

Takasugi, with only a dozen followers, including future political leaders Yamagata Aritomo, Itō Hirobumi and Inoue Kaoru, gathered in Kokura, Kyūshū, and staged an attack against the conservative forces in Chōshū. The subsequent Chōshū civil war began on January 13, 1865.

Takasugi played a decisive role in the civil war and the Kiheitai demonstrated superiority over the samurai forces. With a series of swift attacks and the support of Kido Takayoshi, Takasugi achieved victory in March 1865.

He became one of the main arbiters of Chōshū domain politics and an expert in Western military science, devoting his efforts to importing weapons and raising troops. These reforms proved successful when Chōshū emerged victorious on four fronts against the second Chōshū Bakufu expedition in 1866, with Kiheitai himself securing victory on two fronts.

Takasugi's efforts turned small towns outside of Chōshū into a "nation of arms," giving it a military strength disproportionate to its relatively small size. With his victory over Tokugawa forces, the military power of the Bakufu was discredited and other rival domains decided to join forces with Chōshū in subsequent battles, leading to the Meiji restoration and the end of the Tokugawa shogunate. 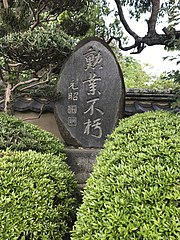 Takasugi did not live to see his victory. He died of tuberculosis on May 17, 1867, aged only 27. The Kiheitai passed into the hands of his protégé, Yamagata Aritomo. Only a year after his death, Takasugi's dream of overthrowing the Tokugawa shogunate was fulfilled with the Meiji Restoration. The Kiheitai was dissolved in the early 1870s after the establishment of the Imperial Japanese Army.

Takasugi was a central figure in the early Meiji Restoration. Today he is recognized and admired for his military talents and skills as a politician. Dying at the early age of 27, Takasugi failed to become one of Japan's most famous leaders in the later Meiji era.

In his hometown, Hagi City in western Japan, he is still remembered as a mystical and energetic hero, who did his utmost to pave the way for modernization, westernization and reform, not only in military but also in political and social matters.

Back to Japanese Samurai