In 939, Taira no Masakado organized a rebellion and attacked the government post of Hitachi province, and captured the governor of the province.

In December of the same year, his rebel army conquered Shimotsuke province as well as Kozuke province and claimed the title of shinnō (親王) (new emperor). Taira no Masakado then kills his uncle Taira no Kunika. On March 25, 940, he was killed by the forces of Fujiwara no Hidesato at the Battle of Kojima.

Masakado was born into a prominent noble lineage, the Kanmu Heishi (or Taira clan descended from Emperor Kanmu). As a young man, he served at the imperial court in the capital and then settled into a life as a country gentleman in the eastern provinces of Japan, northeast of modern Tokyo.

His career is detailed in the Shōmonki (Chronicle of Masakado), a literary account of his life supposedly completed as early as the 940s (although the earliest surviving copy dates to 1099) by an anonymous author.

The insurrection led by Taira no Masakado of 939-940 (known in Japan as Jōhei - Tengyo no ran, based on the calendar periods in which it occurred) ranks among the most dramatic episodes in the early history of the samurai.

Coinciding with earthquakes, rainbows and lunar eclipses in the capital and uprisings in the north and pirate unrest in the west, it threw the court and the capital into panic and culminated, according to most versions of the story, in the leader claiming for himself the title of "new emperor".

Many historians see the incident as a harbinger of the beginning of the events of the late seventeenth, thirteenth and fourteenth centuries, which, step by step, inaugurate the medieval era of the rule of warriors.

The drama begins in the second month of 935, when Masakado is suddenly attacked - ambushed - by another local leading warrior, Minamoto Tasuku (dates unknown), at a place called Nomoto, near the convergence of Hitachi, Shimotsuke, Musashi, and Shimōsa provinces.

Tasuku is the eldest son of Minamoto Mamoru, a powerful warrior and sometime official of the Hitachi government. The reason for his grudge against Masakado is unclear, but his decision to perpetuate it in the field sets in motion a complex and memorable chain of events.

Within months Masakado finds himself at war with several of his relatives. Although taken by surprise, Masakado defeated Tasuku and then retaliated from behind, burning and looting the homes and property of Tasuku's supporters in southeastern Hitachi province, and murdering thousands of residents of these settlements.

Among the most important victims of the battle of Nomoto and its brutal consequences were Tasuku, his brothers, and his brother-in-law, Taira Kunika (?-935), who was also Masakado's uncle.

Their death brings Masakado into conflict with two other sons-in-law of Mamoru, the son of Kunika Sadamori (dates unknown) and Masakado's paternal uncle and father-in-law of Taira Yoshikane (deceased in 937-938).

During the next four years, Masakado took great care to stay within the limits of imperial law. In the ninth month of 936, he received a summons to appear in court to answer charges filed by Minamoto Mamoru but managed to convince the Imperial Police Bureau and the State Council that there were extenuating circumstances for his actions and thus escaped conviction.

Two months later, he is fully pardoned when the court declares a general amnesty to celebrate the emperor's coming of age ceremony. Masakado returns to Shimōsa but is soon at war again, this time with his father-brother, Yoshikane.

A series of raids and counter-raids culminate in an attack on Masakado's home located at Iwai in Shimōsa province. Yoshikane troops surround the residence just before dawn, trapping Masakado inside. Amazingly, Masakado repels Yoshikane and kills more than half of his troops.

Yoshikane himself managed to escape but died a year and a half later of an unidentified disease. In the meantime, Masakado managed to obtain legal sanction for his role in the quarrel in the form of a warrant issued by the state council to arrest Yoshikane, Mamoru, Sadamori and others.

At the beginning of 938 however, Masakado received a second summons from the State Council to question him about another quarrel with his cousin Sadamori. But this time he completely ignored the order.

Acting on the premise that the 937 warrant against Sadamori was still in effect, Masakado led troops to the entire provincial government of Hitachi province to arrest his cousin, but Sadamori escaped before he arrived and hid in the mountains for several months. In the eleventh month of 937, Masakado was sent to the mountains to arrest his cousin.

He is no longer just a provincial warrior in rivalry with local rivals, he is now a criminal, in rebellion against the state. Seeing no way to retreat, Masakado chooses instead to flee forward and seize, in rapid succession of raids, the seat of government of the provinces of Shimotsuke, Kozuke, Musashi, Kazusa, Awa, Sagami, Izu and Shimōsa.

Curiously, his next initiative was to send a letter to his patron, Prime Minister Fujiwara Tadahira (880-949), insisting that he had been unjustly slandered and defamed by his enemies, and that he had remained in spirit faithful to the law.

The traditional view, as reported in the Shōmonki, describes his takeover of the east as the first step in a campaign to make him the master of the entire country. The Shōmonki depicts one of Masakado's supporters coming to him with a proposal that, having already outlawed himself by taking over one province, he may as well annex the rest of the east.

He further describes Masakado receiving an oracle that confers emperor status, after which his allies consider him the "new emperor," and Masakado goes on to institute a new court and bureaucracy and draw up plans for the construction of a new imperial palace in Shimōsa.

It is unlikely, however, that any of these events ever occurred outside the imagination of the Shōmonki authors.

Not only do they involve the sudden appearance of a level of arrogance in a way that is dramatically at odds with Masakado's behavior before and after these incidents,

but the title of "new emperor," the oracle proclaiming Masakado's ascension, the construction of a new imperial palace, and the appointment of new central government officials appear only in the Shōmonki and the texts derived from it ;

they are not mentioned in any of the court proclamations or other documents related to the Masakado affair, which is extremely strange in light of the frenzy and paranoia that gripped the court in 940, if Masakado really did anything.

More likely, Masakado's intention, following the debacle in Hitachi province, is to establish a position of strength in order to take advantage of the court's preoccupation with natural disasters, bandit activities in the northeast and the capital region, and piracy problems in the west in order to negotiate some form of pardon.

Nevertheless, within a month the court issues edicts calling for Masakado's destruction and commissions several notable warriors for the task, including Sadamori and Fujiwara Hidesato (dates unknown), an occasional ally of Masakado.

On the fourteenth day of the second month of 940, the government army caught up with Masakado in the northwestern part of Shimōsa province. Outnumbered more than ten to one, Masakado's troops are routed and he is killed.

On the tenth day of the fifth month, Hidesato and Sadamori delivered Masakado's head to the capital, where it was hung for display outside the eastern market. The head was then taken to the capital.

According to the legend, the head later flies away by itself, lands in Shibasaki, a small fishing village by the ocean and future site of Edo which later becomes Tokyo. She is buried there.

The kubizuka, literally "head grave," located at the time in the present Ōtemachi district of Tokyo, is on a then-existing hill in Tokyo Bay. Through land reclamation over the centuries, the bay has receded to about three kilometers to the south.

When Masakado prepares for his revolt, a vast swarm of butterflies appears in Kyoto, a phenomenon considered to be an omen of the coming battle7.

Over the centuries, Masakado becomes a hero and even a demigod for the inhabitants who are impressed by his stand against the central government, while at the same time they feel the need to appease his malevolent spirit.

The fortunes of Edo and Tokyo seem to fluctuate accordingly with the respect shown to the shrine built for him at kubizuka - any neglect would be followed by natural disasters and other misfortunes.

Thus, to this day, the shrine is well maintained, occupying part of the most expensive land in the world in the financial district of Tokyo near the imperial palace8. His tomb (which contains only an effigy of his head) is located near exit C5 of the Ōtemachi subway station in Tokyo.

Other shrines of which he is the deity include the Kanda-myōjin (神田明神, Kanda-myōjin) (located in Tokyo's Kanda district) and the Tsukudo-jinja (which have many locations).

Takiyasha-hime in art and folklore 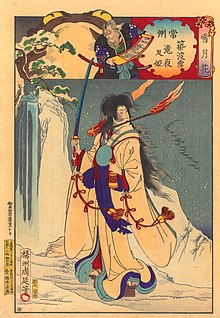 Taira no Masakado's posterity in folklore does not end with Masakado himself; his daughter, Takiyasha-hime (Princess Takiyasha), also appears in Japanese myths.

After her father's death, the historical Takiyasha-hime continues to reside in the ruined palace of Sōma, a detail retained in at least some artistic representations of the folklore version of the princess.

In folklore and art, Takiyasha-hime is sometimes depicted as a supernatural figure, capable of quality sorcery.

The illustration opposite is an example of such a depiction: it is a Meiji era ukiyo-e print by Toyohara Chikanobu in which Takiyasha-hime is shown with a sword in one hand, a bell in the other and a torch in her mouth; the toad, her familiar, is shown in the inset with her father.

An even earlier print that depicts her in such a spectacular supernatural way is Takiyasha the Witch and the Skeleton Ghost by Utagawa Kuniyoshi. In this print located in the palace, she dismisses her enemies by summoning a gigantic skeleton spirit to attack them.