Kobayakawa Takakage (小早川 隆景; 1533 - July 26, 1597) was a Japanese military man and daimyō who lived during the Sengoku era, and one of the sons of Mōri Motonari. Adopted by the chief of the Kobayakawa clan, he changed his name and succeeded his adoptive father after his death in 1545.

Takakage was the third son of Mōri Motonari and was born with the name Tokujumaru (徳寿丸).

In 1541, the thirteenth head of the Takehara branch of the Kobayakawa clan, Kobayakawa Okikage (小早川興景), fell ill and died while attacking Sato-Kanayama Castle (佐東銀山城).

In November 1543, because he had no heir, Tokujumaru was declared his successor because he was a cousin of Okikage's wife. So at the age of twelve, he became the 14th head of the Takehara-Kobayakawa clan (原小早川氏) and received the name Kobayakawa Takakage.

In 1547, when Ōuchi Yoshitaka attacked Kannabe Castle (神辺城) in Bingo Province, Takakage served as one of its commanders and was highly praised for capturing Kannabe's supporting castle, namely Ryūōzan Fortress (龍王山砦), with his men alone.

The other branch of the Kobayakawa clan was the Numata-Kobayakawa (沼田小早川氏). The head of the family, Kobayakawa Shigehira (小早川繁平), was young and blind from an eye disease, so in 1550 it was decided that Takakage would become heir to the Numata branch and eventually unite the two rival branches of the clan.

He married Lady Toida, daughter of Kobayakawa Masahira and sister of the blind Kobayakawa Shigehira, to consolidate his succession. They would never have children for reasons unknown, but would later adopt children to keep the clan alive.

He became, along with his brother Kikkawa Motoharu, a pillar of the Mōri clan and fought bravely in numerous battles. Together with Motoharu was known as "Mōri Ryōkawa", translated as "the two rivers of Mōri" (毛利両川).

In 1571 Motonari died and Takakage continued to serve the Mōri also under the leadership of Mōri Terumoto with whom he faced Oda Nobunaga who began the expansion of the Oda clan in the west.

He led the Mōri forces during the battles of Kizugawaguchi (1576-1578). Hashiba Hideyoshi, who later became known as Toyotomi Hideyoshi, was the general under Nobunaga in charge of the push into the Chūgoku region.

He intensified his efforts to advance and the Mōri forces continued to be pushed back. In 1579 Ukita Naoie of Bizen Province believed that the fight against Nobunaga was hopeless and defected from the fight, sending only a small token force to aid the Mōri.

In 1580, the Miki castle in Harima province that had held back Oda's forces for two years fell. In addition, in 1581, the starving Tottori castle of Inaba province also fell.

In 1582, the siege of Takamatsu in Bitchū province began. Takakage led the main Mōri force along with Mōri Terumoto and Kikkawa Motoharu leading 30,000 men.

However Hideyoshi, who had 30,000 men with him, knew that Nobunaga's main army, which had just defeated the Takeda clan, was marching towards the Chūgoku region. Takekage began secret negotiations with Hideyoshi using his diplomats Hayashi Narinaga and Ankokuji Ekei.

In June of that year Hideyoshi learned of Oda Nobunaga's death during the Honnō-ji incident by Akechi Mitsuhide and hurried back to Kyoto to avenge his master. Akechi Mitsuhide had sent a secret letter to Mōri Terumoto promising him great things, but Hideyoshi's men intercepted the messenger.

Hideyoshi then negotiated with Mōri's diplomats, Hayashi Narinaga and Ankokuji Ekei, without telling them that Nobunaga had been assassinated. He proposed peace if the Mōri gave him the provinces of Hōki, Mimasaka, and Bitchū.

The diplomats thought that Mimasaka had already essentially fallen, and Hōki was only a matter of time. Shimizu Muneharu, the defender of Takamatsu Castle, also committed suicide to save the castle garrison.

Mōri Terumoto had found out about Nobunaga's death and wanted to attack Hideyoshi, but was stopped by the advice of Takakage and the two diplomats who were highly respected in the Mōri clan.

It is said that Takakage said, "It is a pity for the samurai to make peace before the blood of our friends is dried by their swords." 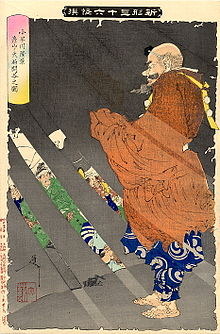 After these events Takakage began a long-standing correspondence with Hideyoshi. Takakage played an important role in the Shikoku and Kyūshū campaigns and was assigned the provinces of Chikuzen, Chikugo, and Hizen in 1586 for a total of 371,000 koku.

However, Takakage objected that it was impossible for the three clans Mōri, Kikkawa, and Kobayakawa to properly administer these provinces since they already had seven to eight provinces in the Chūgoku region to which the three in Kyūshū were now added.

In contrast Hideyoshi tried to have him administer the provinces by making two of them public but Takakage repeatedly declined and said that his nephew Mōri Terumoto was still too young and that his brother Kikkawa Motoharu had already died.

He proposed installing competent officers in Chikuzen and Chikugo and would also alternate with Sassa Narimasa every six months to six years. Hideyoshi refused his resignation from the provinces and this was an opportunity for Takakage to become an independent lord under the Toyotomi administration.

In 1587 his servant Kōno Michinao died, whom he had transferred to Kyūshū. This left Takakage with the problem of taking care of the Kyūshū provinces without help and because of the suspicious nature of his death as he may have been assassinated by Hideyoshi himself.

Since Saionji Kinmochi was also killed at the same time while transporting Takakage's men to Kyūshū, it appeared that Hideyoshi was trying to take power away from the Kobayakawa clan by eliminating its best servants. Hideyoshi was known to have done this on other occasions.

In 1590 Takekage however joined Hideyoshi in the siege of Odawara. He led a division of Kyūshū troops into Korea in 1592 (a division that numbered about 16,000 men in total) and defeated a Chinese force at the Battle of Byeokjegwan near Pyongyang in 1593.

He was however under continuous attack by Korean guerrillas in Jeolla province towards the end of the year he was forced to retreat. In 1595 he was named one of the original regents (which became six before his death) and was given the title Chūnagon by Hideyoshi, with whom he had become a trusted friend.

Being childless, he adopted Kobayakawa's grandson Hideaki as his heir and died at Mihara in Bingo Province in 1597. Often depicted as the most intelligent of Motonari's sons, Takakage was one of the great figures of the last half of the Sengoku period.