Imagawa Yoshimoto (今川 義元, 1519-12 June 1560) was a daimyō (feudal lord) of Suruga province during the Sengoku period of Japanese history.

Based in Suruga Province, he was one of the three daimyos who dominated the Tōkaidō region and one of the leading daimyos in Japan until his death in 1560 while marching to Kyoto to become shōgun. He was killed in the village of Dengakuhazama in Okehazama.

Yoshimoto was born in 1519, the third son of Imagawa Ujichika of the Imagawa clan, which claimed descent from Emperor Seiwa (850-880); it was a branch of the Minamoto clan through the Ashikaga clan. As he is not the eldest son, he cannot inherit the position of head of the family directly from his father.

After Yoshimoto succeeded in becoming head of the family, he married the sister of Takeda Shingen of Kai province. This allowed him to cement an alliance with the Takeda when he helped Shingen imprison his father, Takeda Nobutora, in 1540.

Shortly thereafter, Yoshimoto entered into a struggle against the Hōjō of Sagami province. Beginning in 1542, he began his advance into Mikawa province in an effort to combat the growing influence of Oda Nobuhide in that region, but was defeated in the Battle of Azukizaka (1542).

In campaigns over the next few decades, Yoshimoto gained control of a large area, including the provinces of Suruga, Totomi and Mikawa.

In 1552, Takeda Yoshinobu, the son of Shingen, married Yoshimoto's daughter. Yoshimoto and the Hōjō clan reached a peace agreement in 1554 with the marriage of Yoshimoto's son Ujizane to his niece, Hōjō Ujiyasu's daughter Hayakawa-dono.

In 1558, Yoshimoto entrusted the political affairs of the clan to Ujizane, in order to concentrate on the issue of advancing westward into Mikawa province. 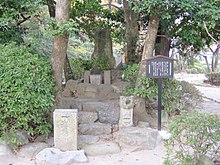 In the summer of 1560, after the formation of a three-way alliance with the Takeda and the Hōjō, Yoshimoto headed for the capital with Tokugawa Ieyasu (then known as Matsudaira Motoyasu) of Mikawa in the vanguard.

While the number of his troops was 25,000, Yoshimoto proudly announced that he had 40,000 men. Although this statement frightened many factions, Oda Nobunaga of Owari province was not taken in. Some historical sources give the number of 40 000.

Having won many victories, Yoshimoto's army lowers its guard and celebrates its success with songs and sake.

According to Meiryō Kōhan (a 40-volume collection written by the Shingon monk Sanada Zōyo, about the deeds and words of famous samurai between the years 1596 to 1715), Yoshimoto had two extremely prestigious swords on that day: a Matsukura-Gō sword that he had inherited from his ancestors and a second sword signed by Samonji.

Both are associated with Masamune, Japan's most famous blacksmith, whose disciples they were.

Two of Oda's samurai, Mōri Shinsuke and Hattori Koheita, plunged into the melee between the two armies and cut off Yoshimoto's head at Dengakuhazama.

Despite his desperation, he was not caught without his weapons and armor, and did not fall without resisting and being wounded several times before receiving the final blow.

Imagawa Ujizane became the head of the family after the death of Yoshimoto but the Imagawa clan lost power. Ujizane is later called by Tokugawa Ieyasu and becomes kōke in the Tokugawa clan administration. Yoshimoto's niece is Lady Tsukiyama, the wife of Tokugawa Ieyasu.

Yoshimoto has several graves; his body itself is buried at Daisei-ji, a temple in the town of Toyokawa in present-day Aichi Prefecture.

He is one of the characters in Pokémon Conquest (Pokémon and Nobunaga's Ambition in Japan), with the Pokémon Pomdepik and Foretress as partners.

He is a character in the light novel, manga and anime Oda Nobuna no Yabō, and like many characters, such as his rival Nobunaga, Imagawa Yoshimoto is a female character.