Mujina (貉) is an ancient Japanese word that originally referred to the Japanese badger. In some regions, the term refers more to the raccoon dog (also called tanuki) or to refer to civets.

To add to the confusion, in some areas badger-like animals are also known as mami and in part of Tochigi prefecture, badgers are called tanuki and raccoon dogs mujina.

The confusion over the term mujina led to legal consequences in Japan. In 1924, in Tochigi Prefecture, a hunter killed a tanuki that he thought was called mujina.

The Supreme Court of Japan ruled that the hunter was legitimately confused and he was found not guilty. 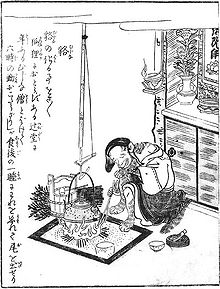 In Japanese folklore, along with the kitsune and tanuki, mujina are frequently depicted as yōkai who metamorphose and deceive humans.

They first appear in Japanese literature in the Nihon shoki, in the section devoted to the 35th year of Empress Suiko's reign (627) where it is stated:

"In two months of spring, there were mujina in the land of Mutsu (春2月、陸奥国に狢有り), they change into human beings and sing songs (人となりて歌う)," which shows that at that time there was a general idea that the mujina changes shape and deceives humans.

In the Shimōsa region, they are called kabukiri-kozō (かぶきり小僧? ) and can metamorphose into a kozō (little monk) wearing a strangely short kimono with a head wearing a kappa-like hat and often appear at night on roads with little traffic and say, "Drink water," "Drink tea" (水飲め、茶を飲め).

Lafcadio Hearn's collection of kaidan short stories entitled Mujina about an encounter with a faceless ghost (a noppera-bō) is also well known.

The name can also refer to: