In Japanese mythology, an inugami (犬神 , literally "god-dog") is a way of using an Animal Spirit, commonly originating from a dog, to carry out revenge or acting as guardians on behalf of its Inugami-mochi (犬神持ち "inugami possessor").

Inugami are a variety of sorcery called Kojyutsu (蠱術), which has been banned from use in the Heian era (平安時代). 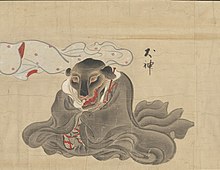 As in most cultures, the dog is seen in Japan as a loving, fearless, and agile companion that is fierce in the face of its master's enemies.

In Japanese folktales, dogs themselves are regarded as magical beings; one legend states that the dog was once able to speak, but lost his ability. The indigenous group of Hokkaidō, the Ainu consider the dog to be a cunning, dangerous and somewhat humane animal.

The general belief says that to create an inugami, one had to bury a dog up to its neck and leave food for it, but without it being able to reach it. During the process, the master tells the dog that its (the dog's) suffering is not greater than his (the master's).

When the dog dies, its neck is cut (it becomes an inugami) and the animal's neck is used as an amulet, thus returning to the obedient spirit. Another way to make an inugami is to lock several dogs in a place without water and food.

They will eat each other, then wait for the last surviving one to die and cut off its head to be used as an amulet.

A more specific legend states that an old woman who wished revenge against an enemy, buried her prized dog in the ground with only its head outside, and said "if you have a soul, do my will and I will worship you as a god".

She then sawed off the dog's head with a bamboo saw, releasing the dog's spirit as an Inugami. The spirit did as she wished, but instead by its painful death, it bewitched the old woman.

In the Oki Islands, the inugami plays the role that the kitsune (fox) plays in other regions of Japan.

It is believed that an inugami-mochi will be blessed with good luck and success in life, but instead they will be rejected by other people, and have a hard time finding a mate; they must also be careful not to insult their inugami lest they receive their wrath, which unlike a kitsune, does not simply follow its master's wishes, but also acts on its own impulses.

There exists to this day the belief of the inugami throughout southwestern Japan (Kyushu, Shikoku and even reaching Okinawa). In Shikoku (四国), before celebrating a Marriage, families check the spouse's family tree beforehand to see if any of its members is an Inugami-mochi. In order not to get involved in witchcraft.

There are several hypotheses of the origin of the inugami, one is the one that says that it comes from a part of the body of the Youkai Nue (鵺) that was split into 4 when it was exterminated by Minamoto no Yoshitsune (源頼政).

The latter says it was born when Gennou Shinnshou (げんのう しんしょう、源翁心昭) tried to minimize the power of Sesshouseki (殺生石 ver: Kyuubi no kitsune) and split this stone, from one piece that flew to the ancient country of Ueno (上野国, currently Gunnma province 群馬県) became Osaki (オサキ) and the other that went to Shikoku (四国) became the famous inugami (犬神).

The original body of the inugami stays behind when it leaves and follows its master's wishes; the buried corpse slowly withers and rots, and if the inugami returns after the body is no longer habitable, it will take possession of its master's body, making it even more powerful.

Possession by an inugami is said to cure disease, or ill health, but with the result of the possessed person acting like a dog.