Inari (稲荷?) (also known as Oinari) is the Japanese deity of fertility, rice, agriculture, foxes, industry and general success. She is usually depicted as a male, female or androgynous deity, and is sometimes represented as a set of 3 or 5 deities. This deity is popular in both Shinto and Buddhist religions. Inari foxes, or kitsune, are pure white and act as her messengers.

Inari has been depicted as both a male and female deity. The most popular way she is depicted, according to Karen Ann Smyers' studies, is as a young female deity, an old man carrying a rice cart, or an androgynous bodhisattva.

None of these depictions is unique or true, as both gender and representation vary depending on the tradition of the region. Because of her relationship to the kitsune, Inari is sometimes depicted as a fox, even though either Buddhist or Shinto monks do not accept the latter depiction.

The female figure of Inari is often identified as the Dakiniten, a Buddhist deity who is the transformation of the Indian deity dakini4 or as the Benzaiten of the Seven Lucky Gods. Dakiniten is portrayed as a female or androgynous boddhisattva on the back of a flying white fox.

According to the records of Fushimi Inari-taisha, the largest and oldest shrine dedicated to Inari, the kami or deities that have been part of it are Izanagi, Izanami, Ninigi and Wakumusubi in addition to the deities mentioned above.

According to the Nijūni shaki the three deities were Ōmiyame no mikoto (water), Ukanomitama no mikoto (grain) and Sarutahiko no mikami (earth).

The fox and the wish-fulfilling jewel are prominent symbols of Inari. Other common items in depictions of Inari (or his Kitsune) include a sickle, a sack of rice, and a sword. Another of his possessions was a whip that he used to burn people's rice crops. 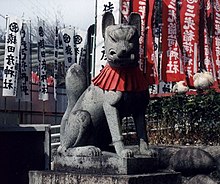 The origin of the veneration of Inari is not very clear. The first recorded use of the current kanji, meaning "transporting rice,"" was in the Ruijū Kokushi in 827 A.D. Other kanji with the same phonetic reading, many of which have references to rice, were in use earlier, and many scholars agree that the name Inari derives from ine-nari (growing rice) (稲成り?).

The veneration of Inari has existed since 711 A.D., which is the official date of the construction of the Fushimi Inari-taisha shrine on Inari Mountain in Fushimi-ku, Kyoto.

Scholars such as Kazuo Higo believe that the veneration existed even centuries before the shrine was built. They suggest that the Hata Clan began to venerate Inari as a deity of agriculture in the late 5th century. The name Inari does not appear in classical Japanese mythology.

In the Heian period the veneration of Inari spread throughout the country. In 823 A.D., following Emperor Saga's presentation of the Tō-ji temple to Kūkai, the founder of the Shingon Buddhist sect, Inari was designated as the temple's protective spirit.8 In 827 A.D., the court granted Inari to the fifth rank, which increased the deity's popularity in the capital.

Inari's rank was raised again in 942 A.D. by Emperor Suzaku, who granted him the highest rank as thanks for his help in the rebellions. At that time, the Fushimi Inari-Taisha shrine was one of 22 shrines that received imperial patronage, which was quite an honor. The second shrine to Inari, the Takekoma Inari, was built in the late ninth century.

Inari's popularity continued to grow. The Fushimi Inari-Taisha shrine, by then already a popular place for pilgrimage, gained renown when it became an imperial pilgrimage in 1072. By 1888, the shrine festival was rivaled in splendor by the Gion Matsuri.

In 1468, during the Ōnin War, the Fushimi Inari-Taisha shrine complex was completely burned down. Reconstruction took 30 years, and the new construction was consecrated in the year 1499.

While the old complex had three kami in separate buildings, the new complex had five kami in one building. A Buddhist temple was also built for the first time, and the priestly line was expanded to include the Kada Clan.

During the Edo period, veneration of Inari spread throughout Japan, and especially in Edo. Smyers attributes this spread to the daimyō (feudal lords) movement.

By the sixteenth century Inari had become the patron of blacksmiths and protector of warriors, which is why many castles in Japan include a shrine to Inari, and daimyo took their faith in their patron kami with them when they had to move to a new domain.

Inari's divine role continued to expand on the coast, becoming the protector of fishmongers, while in Edo he was invoked to prevent fires. He became the patron of actors and prostitutes, as his chapels were often located near the places where they worked and lived.

Inari quickly began to be venerated as a wish-fulfilling deity, the deity of luck and prosperity. A popular Osaka saying was Byō Kōbō, yoku Inari (For illness [pray to] Kōbō, for wishes [pray to] Inari). Ironically, Inari began to be venerated for good health, and cures for various afflictions such as coughs, toothaches, broken bones, and syphilis were attributed to her, and women prayed to Inari to become pregnant.

After an imperial decree ordered the separation of Buddhist and Shinto beliefs, many shrines to Inari underwent changes. At Fushimi Inari-taisha the structures that were clearly Buddhist were demolished.

In the Tokugawa period, when money replaced rice as a way of measuring wealth in Japan, Inari's role as kami expanded to all aspects of finance, business and industry. In the early 18th century, followers of Inari in Ginza minted coins as offerings. These coins bore images of two foxes and a jewel as representatives of long life and good fortune. 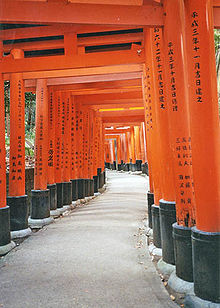 Inari is a popular deity with many shrines and temples throughout Japan. According to a survey conducted by the National Shinto Shrine Association in 1985, there were 32,000 shrines dedicated to Inari, more than one-third of the Shinto shrines in Japan.

This number only includes shrines with full-time monks living in them. If one were to take into account small shrines located on roadsides, in homes, in corporate offices or small shrines that do not have full-time resident monks, or Buddhist temples, the number would increase to more than 100,000.

At the entrance to Inari shrines there are usually one or more vermilion-colored toriis and some kitsune statues, which are usually adorned by red bibs called yodarekake that are put on by their followers. The red color is often identified with Inari, due to the prevalence of that color in their shrines and torii.

The main shrine is Fushimi Inari in Fushimi, near Kyoto, where the paths leading up the hill are marked by torii and kitsune statues appear in pairs, one representing the male and one the female gender.

These fox statues usually carry some symbolic object in their jaws or under their claws. They usually carry a jewel and a key, a sickle for cutting rice, or a scroll. Virtually all Inari shrines, regardless of size, have at least a couple of figures, usually flanking the altar or in front of the entrance to the shrine.

The statues are rarely carved in a realistic manner. They are usually styled and are usually carved with the animal sitting on its tail and looking straight ahead. Despite these common characteristics, the statues are usually quite individualistic and it is difficult to find two identical figures.

The traditional festival in honor of Inari is the first day of the horse (sixth day) of the second month (nigatsu no hatsuuma) of the lunisolar calendar.

In some places in Kyūshū there is a festival, or prayer period, that begins five days before the full moon in November. Sometimes such a festival lasts an entire week. Prayers are accompanied by offerings of rice to a shrine to Inari each day, receiving o-mamori or lucky charms. This festival is particularly popular in the rural area near Nagasaki.

The emissary of Inari is the fox, and two images of this animal flank the effigy of Inari in all her shrines, one male and one female. Culturally, the kitsune has been associated with Inari because of the fox's diet of insects, small reptiles, rodents, birds and berries, and farmers used to capture and train foxes to control pests in the rice fields.

Inari foxes are popularly white, the color of good omens, and are known as kitsune tenkū, which literally means "heavenly fox." These kitsune, unlike the rest of their species, such as wild foxes or demon foxes, are of extraordinary kindness and generosity, whose only interest in their lives is to help and protect humans.

They usually decide to adopt a mortal and mundane life, transforming into humans and marrying and having children with them. Inari foxes are said to have unparalleled healing powers, capable of curing any illness or injury, no matter how serious and severe.

They are also said to have purifying powers that allow them to expel ghosts, demons and even other vile kitsune, such as nogitsune (demonic kitsune) or ninkos (ghostly kitsune).

Inari Fox in the popular culture

In the manga and anime Gingitsune, the protagonist, Makoto, is a girl, daughter of the priestess of an Inari temple, who has received the gift of being able to see the god's messenger, Gintaro.