Daikokuten (大黒天?, Mahakala, from Sanskrit "the great black one"), or simply Daikoku, is the Japanese deity of wealth, commerce and trade. 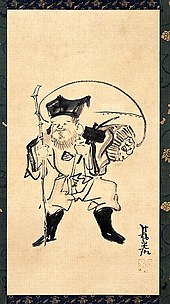 Ebisu and Daikoku are often paired and depicted as masks or sculptures on the walls of small shops. In its popular form, it is both considered a kami of Ōkuninushi or kitchens in Shinto/Buddhist syncretism, but also as the peaceful form of the Buddhist deity Mahakala.

When he was incorporated among the Seven Divinities of Happiness, he was depicted as a fat, smiling man, sitting or standing on rice bags symbolizing wealth, holding a large bag containing wisdom and patience on his shoulder.

He also holds in his right hand a kind of wooden mallet (uchide no kozuchi) representing the virtue of work. His followers use similar mallets, which they wave in order to obtain wealth.

The irritated form found in the shingon mandala of the taizōkai has six arms, two of which lift the remains of an elephant, another disembowels a gazelle with a sword, another holds a deva by the hair.

This form, rarely represented outside the closed circles of Japanese Tantrism, was the object of rituals linked to war in ancient Japan. It is also present in its usual form, in the mandala created by Nichiren, the gohonzon associated with Kishimojin (Hārītī in Sanskrit).

It is sometimes depicted alongside Namazu, the catfish on which Japan is based.