A bakeneko (Japanese: 化け猫, "shape-shifting cat") is a cat that has become a yōkai, or supernatural creature in Japanese folklore.

It is often confused with nekomata, another cat-like yokai, as the distinction between the two is often blurred.

Many bakeneko legends have spread in many parts of Japan, but the Nabesima bakeneko incident in Saga Prefecture has become particularly famous.

The reason cats were considered yokai in Japanese mythology can be traced back to a number of characteristics:

For example, the way their irises change depending on the light conditions, the way their fur sparkles when stroked due to static electricity (especially in winter), the way they walk without any noise to mark their steps,

their fierce nature, which always remains even if they sometimes show tenderness, their inability to be controlled (unlike dogs), their sharp claws and teeth, their nocturnal lifestyle, and their speed and agility.

In addition to cats, many other animals with similar qualities appear as yokai in ancient stories: the stubborn tenacity of snakes, the ability of foxes (kicune) to appear in female form, and the brutality of the tanuki in the Edo period folktale of the Kachsi-Kachsi Jama.

Despite this, cats are also featured in many stories in comparison, through their unique position on the border between nature and civilisation. As villages and cities were built and people became more distant from nature, cats followed.

And since they lived so close to humans, yet still retained their wild nature and mystery, stories began to circulate about them, and eventually the image of the bakeneko was formed.

According to a popular belief, the bakeneko licks the oil of the eastern lanterns, and in the description of the cat licking the oil in the Edo period encyclopaedia, the Vakai Sansai Zue (Three Worlds Pictorial Dictionary), this cat licking the oil is an omen of some strange event to come.

People at the time used cheap fish oil, such as sardine oil, in lanterns, which explains what made the cats do this. Also, the Japanese at the time ate mainly vegetables and grains, and fed the cats the leftovers.

However, as cats are carnivores, they did not get enough protein and fat from it, so they were even more attracted to lamp oil.

And the sight of a cat standing on two legs to reach the lantern, its face illuminated and its eyes rounded, could paint an unnatural and eerie picture, just like a Jokan.

The mysterious atmosphere surrounding cats has been identified with the image of prostitutes who worked in the red-light districts of the Edo period. This is the origin of a famous character from Kushazos, the bakeneko judjo.

As with the nekomata, another cat-like yokai whose tail is said to split in two when it grows up, Japanese folklore has it that the bakeneko evolves from older cats.

There are stories of cats that have been bakeneko for twelve years in Ibaraki Prefecture and Nagano Prefecture, and thirteen years in Kunigami District, Okinava Prefecture. In the Jamagata district of Hiroshima Prefecture, it was believed that if a cat was raised for seven years or more, it killed its owner.

As a result, in many other regions, when someone adopted a cat, it was decided in advance how many years it would be raised. In addition, stories of a cat brutally killed by humans becoming a bakeneko and cursing its killer were common.

Thus, the bakeneko could not be born merely from old cats, but to take revenge on cruel humans.

The bakeneko possesses a wide range of abilities, including shape-shifting into human form, dancing while wearing a towel or bandana on its head, human speech, cursing, controlling the dead, possession, and hiding in the mountains with wolves to prey on unsuspecting tourists.

A curious case in Osika district, Adji island, Mijagi prefecture, reports of a shape-shifting cat that turned human and wanted to sumo.

Although, as for the legend that cats can speak human, it is worth pointing out that humans can misinterpret cat meowing, and for this reason some people believe that cats are not the benign type.

In 1992 (Heiszei 4), a newspaper article was published about a case where a cat was supposedly heard talking, but on second hearing, people realised that it was only meowing and that its voice was accidentally similar to human speech.

In the Edo period (1607-1867), a popular belief spread that cats could bewitch people with their long tails, which resembled snakes. They were therefore disliked and, following tradition, their tails were cut off.

There are theories that this may be behind the high number of short-tailed cats in Japan, as natural selection favoured them.

The popular belief that cats can cause strange events is not unique to Japan. For example, in China's Zhejiang province, it was believed that if a cat was raised for more than three years, it would bewitch people.

Superstition had it that white-tailed cats were particularly good at this, so it was common to be wary of keeping a white cat. Since people were said to be mesmerized by the spiritual energy of the moon, it was said that when a cat looked up at the moon, whether its tail was cut or uncut, it should be killed immediately.

A famous bakeneko legend is set in the time of Nabesima Micusige, who was the second daimyo in Saga Province, Hizen Province. Ryuzuji Matashichiro served Micusige and was his opponent in go.

One day Ryuzuji angered Micusige, who had him executed. Ryuzuji's mother, after telling her cat of her deep grief, committed suicide.

The cat swallowed the spilled blood and became a bakenek. Every night he went to the castle and tormented Micusige. Micusige's loyal servant Komori Hanzaemon finally killed him and saved the Nabesima family.

Then, after the remaining members of the Ryuzuji clan created communal disturbances around Saga Castle, Naosige, in order to appease the Ryuzujis, had the Tenyuji (Tafuse, Saga) built.

This may have been the cause of the unrest, and it is believed that the bakeneko was a personification of the anger of the Ryuzujis.

Also, the fact that the Nabesima clan inherited power from the Ryuzuji clan was not a problem in itself, but the death of Takanobu and then the sudden death of Nabesima Katsusige's son is believed to have been the cause of this kaidan, which was born out of this chain of unfortunate events.

The legend later became a sibai (play). In the Kaei era (1848-1854), it was first performed in Nakamura-za as "Hana Sagano Nekoma Isibumi Si" (花嵯峨野猫魔碑史).

The "Sagano" in the title is the name of a place in Tokyo Prefecture, but it was also a pun on the word "smell". The play gained great popularity throughout Japan, but after a complaint from Saga province, performances were stopped.

However, as the macsi-bugjo (a samurai official of the shogunate) who lodged the complaint to stop the play was Nabesima Naotaka of the Nabesima clan, rumours of the bakeneko incident spread even more.

The story then spread even further through the codean "Saga no Jozakura" (佐賀の夜桜) and the book of historical records "Saga Kaibjoden" (佐賀怪猫伝). In the kodan (traditional Japanese oral storytelling), Ryuzuji's widow told her grief to her cat, which then became bakeneko, and then killed and ate Komori Hanzaemon's mother and wife.

She then took their form and put a curse on the family. In the historical record, the incident was not related to the Ryuzuji event, but a cat that was hurt by the landlord of Nabesima, Komori Handajú, took revenge and killed and then devoured the landlord's favourite concubine, took on his form and caused damage to the family.

At the beginning of the Sōva era (1926-1989), kaidan films such as "Saga Kaibjōden" (佐賀怪猫伝) and "Kaidan Saga Jasiki" (怪談佐賀屋敷) were released and became quite popular.

Actresses such as Irie Takako and Suzuki Sumiko who played the role of bakeneko became famous as "bakeneko actresses."

Other writings of Bakeneko

The role of the cat as Jókai in literature goes back a long way, to the Kamakura period (1185-1333). The collection of sechuva (oral folktales before the 14th century), the Kokon Chomonju, contains records from this period in which cats are described as exhibiting strange and suspicious behaviour, writing "perhaps they have become demons".

The old stories about bakeneko are related to temples, but it is believed that when Buddhism came to Japan, cats were brought to protect the sutras (sacred scriptures) from the harm of rats.

Likewise, stories of dancing cats can be seen in "Kassi Java" (甲子夜話), and "Ovari Ryoiki" (尾張霊異記). In the fourth chapter of "Mimibukuro", it is stated that any cat that passes the age of ten will begin to speak human language, and cats born from the crossing of a cat and a fox will be able to do so even earlier.

According to stories about shape-shifting cats, old cats often take on the image of old women. The Edo period was the golden age of kaidan about bakeneko, and the performance of a Shibai like the "Nabesima Bakeneko Incident" added to the popularity of the subject.

In Makidani, Harima Province (in present-day Siso, Hyogo Prefecture), rumours spread of a man in Karakava who was a bakeneko.

The same story can be found in Taniguchi (Fukusaki village, Jinsha area) within the province, where it is said that a bakeneko who had caused trouble for a local resident was executed by someone from the temple. This bakeneko was protected from all arrows and bullets by his chagama pot.

These myths, like when Sushanoo destroyed Jamata no Orochi, are similar in that the old families of the place played a role. 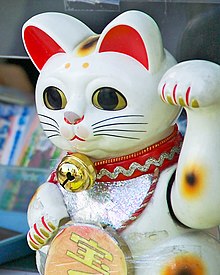 The popular lucky totem, the maneki-neko (招き猫, "waving cat"), which can be seen at the entrance of shops, is also a type of bakeneko.

A famous bakeneko story is about a man named Takasu Genbei whose mother is completely changed after her cat disappears.

She avoided the company of everyone, including her family and friends, and ate her food alone in her room. When the family spotted her, they saw a cat-like monster in her clothes, chewing on animal carcasses.

Takasu, who remained sceptical, slaughtered the creature masquerading as her mother, and a day later the woman's body had reverted back to the missing cat.

Takasu then tore up the floor of his mother's room and found her bones hidden there, all the flesh chewed off.