Amabie (アマビエ) is an anthropomorphic yōkai with three legs, which emerges from the sea and prophesies either a bountiful harvest or an epidemic.

An amabia appeared in Higo province (Kumamoto prefecture) according to legend around the middle of the fourth month in the year Kōka 3 (mid-May 1846) in the Edo period.

A bright object had been spotted in the sea for several nights. The city official went to the coast to investigate and saw the amabia. According to the sketch made by this official, it had long hair, a mouth like the beak of a bird, was covered with scales up to the neck and had three legs.

Addressing the official, she identified herself as an amabia and told him that she lived in the open sea. She then delivered a prophecy, "There will be a good harvest for six years from the current year; if a disease spreads, show an image of me to those who fall ill and they will be healed."

Then she returned to the sea. The story was printed in a kawara-ban (a printed newsletter), along with her portrait, and thus the story spread in Japan.

It has been conjectured that this amabie was simply a copy error for "amabiko," a similar yōkai creature. Like the amabie, the amabiko is a multi-legged prophetic creature that prescribes the display of its portrait as a defense against illness or death.

An illustrated manuscript of an 1844 encounter in Echigo shows a cephalopod-like amabiko, consisting of a head with three long appendages protruding from it, without a torso.

It has "short hair growing all over its body, including its face, with human-like ears, round eyes and a slightly protruding mouth."

The creature announced the death of 70% of the Japanese population that year, but this could be avoided with the use of its image.

A monkey-like amabiko (尼彦) appears in a painting from Higo province belonging to Kōichi Yumoto, an authority in the study of this yōkai. The accompanying text tells of a man named Shibata Hikozaemon who heard monkey cries at night, wanted to see them, and discovered this amabiko.

Yumoto insists that this painting represents a quadruped. However, there are also mass-printed copies of monkey-like amabiko with very similar accompanying text:

however, they have only three legs, as reported in the Yūbin Hōchi Shinbun, in an article of June 10, 1874. The amabiko is also the only one of its kind. According to both types of documents, this monkey was observed in Mana-kōri (眞字郡), a non-existent county in Higo province.

The Amabiko-no-mikoto (天日子尊, the holy Amabiko) was spotted in a rice field in Yuzawa, Niigata, as reported in the Tokyo Nichi Nichi Shimbun dated 8 August 1875.

This example is different from the others since it was not found in the sea but in a wet rice field, it professed to serve the celestial gods (of Shinto), and it received the divine imperial title of -mikoto.

Arie (アリエ) is a similar creature that appeared in Aotori-kōri County, Higo Province, according to the Kōfu Nichinichi Shimbun newspaper, dated June 17, 1876, although this report was refuted by another newspaper. 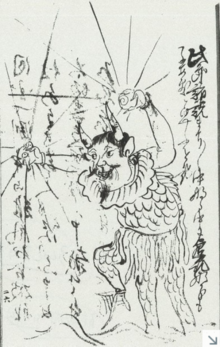 The yamawarawa ("mountain child") of Amakusa Island folklore is said to haunt the mountains. His ability to prophesy indicates that he belongs to the same genus as the amabia.

Other yōkai that are very different in appearance have the ability to predict the future, such as the kudan, the jinjahime or "princess of the shrine," the hōnen gamé (豊年亀), "the turtle of the bumper harvest year," and the "turtle woman."

The amabia is considered a type of mermaid, in some circles, but since the amabia is also known for its ability to repel the plague, it should be considered a deity according to some rather than just a mythological creature.

According to Matthew Meyer, all of these yōkai appeared during the Meiji era (1868-1912), when Japan opened up to the rest of the world after decades of isolation, bringing new diseases, such as cholera.

The yōkai were also known to have been used to fight plague. For example, another three-legged, mermaid-like yōkai, but horned and holding balls of light, reportedly appeared on a beach in Bingo province (Hiroshima prefecture since the Meiji era) in 1846 to announce an epidemic.

Amabie has been included in Shigeru Mizuki's yōkai anthologies. She has her statue near the Mizuki Shigeru Memorial Museum.

COVID19 outbreak, Amabie became a popular Twitter theme in Japan. After the Kyoto University Library published a historical document from 1846 featuring a drawing of Amabie online, the yōkai went viral.

Her image has also been used on the website of the Ministry of Health, Labor and Welfare, on candies , on uchiwa fans or on traditional pastries, sometimes with humor.

Atsuko Nishida, creator of the character Pikachu, designed an ema depicting a white fawn and Amabie for the Kasuga Taisha shrine in Nara.

Ryan Holmberg, a comic book historian, explains Amabie's popularity by the optimism that can be derived from her story and by the fact that she allows us to talk about the virus without showing its image, which would be taboo.