Haniwa (埴輪, "terracotta cylinders") are Japanese funerary terracotta. They have been found on many tombs of the Kofun period (古墳時代, Kofun jidai), from the second century to the sixth century.

The word kofun in Japanese refers to the type of burial mounds, often "keyhole" but also round or square, which appeared in the second half of the 2nd century and disappeared during the 6th century.

They have been a subject of scientific and archaeological research since the Edo (江戸時代) era.

The ancient sources mentioning haniwa are few. They include the Nihon shoki (日本書紀, Annals of Japan, early vii century).

Cylindrical haniwa are planted in a tight line, around mounds, and on their tops are other haniwa, figurative representations.

The haniwa are terracotta objects, most often simple cylinders and, for some, figurative. They are placed around the burial mounds of the ruling elite, the figurative haniwa being on the mound.

These haniwa were thus found in southern Honshū - particularly the Kinai region around Nara Prefecture - and northern Kyūshū, where the kofun are located.

The figurative haniwa have a variety of forms - horses, birds, fans, fish, houses, weapons, shields, umbrellas, pillows, and human beings, both men and women, but any of them [unclear], as we will see below. On some haniwa, the riders wear armor, a sword and other weapons and ornaments. 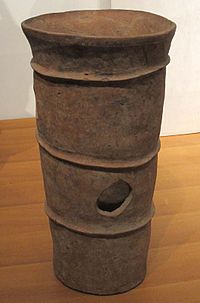 Their origin derives from the pedestals supporting globular jars deposited near the tombs of chiefs of the Late Yayoi. These pedestals, highly decorated with incised curvilinear patterns and hollowed-out motifs, supported these jars which probably contained rice.

Peasant communities would have placed them at the side of the deceased in the hope of a bountiful harvest. The first cylindrical haniwa appeared in thousands and were placed around the mound by the peasant communities for the common welfare.

Arranged in a tight row, they constitute a kind of enclosure that is supposed to hold the spirit of the deceased chief, and thus preserve the community. A few painted decorations have survived; they repeat motifs found on dōtaku bells and on the pedestals of the final Yayoi, related to the rituals of peasant communities.

Cylindrical haniwa symbolize offerings of food made by common people to the deceased chief. These cylindrical haniwa are placed at the initial kofun around the burial mound, while traces of previous popular celebrations disappear all around, as the rituals become more and more esoteric.

The figurative haniwa (houses with open windows and silos of the elite, soldiers in arms, horsemen, servants...) are markers of the status of the deceased, deposited by the other representatives of the elite, this time dispersed on the top of the mound, and not on its perimeter.

With the last great kofun (Maruyama stake, l. 318 m, Kashihara, Nara prefecture), the haniwa which served as an offering of the community and as a protection for it, disappeared and, with them, what made the keyhole mound a place to receive wishes for the well-being of the community.

This disappearance implies the unquestionable supremacy of the supreme leader. The largest mound after this one is now only 100 m long. No more kofun are built after this one.

Areas surrounded by haniwa have also been found near rivers 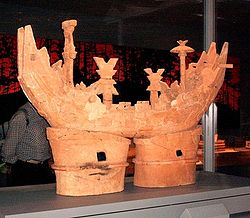 Haniwa are made of unglazed fired clay, mainly using the wasumi (or dovecot) technique which consists in assembling the object with doves (rolls) of clay. The largest ones can reach more than 2m.

In the life of the century, groups of specialized potters appeared, which centralized the manufacture to some extent. The haniwa were then sent to different sites. However, regardless of their origin, all figurines are hollow, as are the eyes and mouths of the characters and animals they represent.

The haniwa were also painted, as were the walls of the burial chambers and even the bones. In particular, they bear traces of red paint (extracted from iron), especially to emphasize the features of the anthropomorphic figures. They were also decorated with white pigments (clay) and black pigments (from manganese) which are not well preserved.

Most of the haniwa have been found in southern Honshû (本州) - specifically in Kinai (畿内), near Nara (奈良) - and northern Kyûshû (九州).

All haniwa seem to have one or more holes, which open on the hollow part of the ceramic. They are sometimes non-figurative (triangles, discs...), sometimes figurative (eyes, mouths, windows...) and sometimes hidden (at the base of a quiver, for example).

Haniwa in the form of cylinders, volubilis or vases

The shape of haniwa offerings in tombs evolved gradually. The earliest ones (2nd century - 5th century) were cylindrical or similar to large vases (on their pedestal for the earliest).

They were baked in small ovens near the monument. In the form of a vase on a pedestal, there were also volubilis-shaped vases (flared haniwa) in the second century. The "vase" shape persisted throughout the period. Their cylindrical or oval lower part was buried in holes or ditches placed in front of or on the mound.

The cylindrical type is the most commonly encountered, and is assembled by rolling the clay cord (3 to 4 cm in section) on itself. Decorations may have been traced with a wooden stick on the external surfaces, smoothed by hand, the interior being smoothed with a spatula.

The assembly was carried out in as many phases of 10 to 20 cm as necessary, with levels marked by lines in relief making the effect and the office of a strapping. Circular or other openings were made.

The figurative haniwa, witnesses of the elite

From the second half of the 5th century, haniwa of animal and human forms appeared: dogs, horses, birds, deer but also, sometimes exceeding 1,30 meter in height, warriors, musicians, dancers, priestesses.

The diversity, notably of the costumes, highlights the hierarchy of these societies. During the kofun period (古墳), a society of high aristocracy with military leaders develops. Its horsemen wear iron armor and carry weapons, especially swords.

End of the kofun and haniwa period

The arrival of Buddhism in Japan will lead to the disappearance of this form of statuary by bringing new modes of burial.

Even if the word haniwa defines terracotta statues (which are by far the most numerous), its meaning has sometimes been extended. Indeed, carvings of stone horses (石馬, sekiba), men (石人, sekijin), or shields have been found in northern Kyūshū, carved from the lava of Mount Aso (阿蘇山),

as well as wooden objects (木製品, mokuseihin), which are very rare because of the difficult preservation of wood, in the Kinai, and these carvings are, sometimes, also called haniwa.

But Koji Mitzoguchi does not make this amalgam and distinguishes well between a haniwa, made of clay, and a sculpture, carved in stone.

They appear in the middle Kofun period, 5th century. These novelties appear in the north of Kyushu, facing Korea. The haniwa are then accompanied by statues carved in stone which often represent men and horses, but also other motifs.