The word ashigaru means "light foot". They are the basic infantry units of medieval Japan, mainly made up of peasants wearing jingasa. Their name comes from the little armor they had, giving them some mobility but little protection.

The ashigaru's weapon was theoretically the naginata (vouges) but, with time, their armament was increasingly made up of yari (spears) and finally replaced by the tanegashima or teppo arquebuses. They constituted the major part of the troops of an army and almost all the foot troops.

At the beginning, simple peasants armed in a disorderly way, they became real infantry troops, armed with muskets after the appearance of these in the 16th century. They were formidable in groups. The role they played in Oda Nobunaga's victory over the Takeda cavalry at the battle of Nagashino remains famous.

Attempts were made in Japan by Emperor Tenmu (673-686) to have a national army, composed of conscripts, but none were successful and Japan in the tenth century relied instead on individual landowners to provide men for conflicts and wars.

These horse-owning landowners were the origin of the samurai class, and the men who worked the land for the lords became ordinary foot soldiers in wartime. These foot soldiers may have ancient ties of loyalty to the landowners that go back several generations.

Samurai landowners as well as peasant foot soldiers took part in many wars and conflicts, including the Mongol invasions of Japan in 1274 and 1281. The permanent state of war between 1300 and 1500 necessitated at times the hiring of foot soldiers with no particular loyalty.

Paid only in booty, these mercenaries were not well trained and were not always reliable in battle. Nevertheless, these wandering foot soldiers eventually became the ashigaru.

Ashigaru are usually armed with naginata, yari, yumi and swords. The armor of the ashigaru varies according to the period [Which one], from no armor to heavy armor, and may consist of conical hats called jingasa, made of leather or hardened and lacquered iron, torso armor (dou or dō), helmets (kabuto), armored caps (tatami de Zukin), armored sleeves (kote), shin protection (suneate), and thigh protection (haidate).

The wars of the Sengoku period (15th and 16th centuries) demanded that large quantities of armor be produced for the ever-growing armies of ashigaru. Single grade ammunition (okashi or loaned), torso armor (dou or dō), and helmets (kabuto) were mass-produced, including tatami, folding, or retractable armor.

Tatami armor is made from small rectangular (karuta) or hexagonal (kikko) plates of armor, usually linked together by a chain of armor (kusari) and sewn to a canvas backing. In the sixteenth century, ashigaru were also armed with tanegashima-type wick plates. Small banners called sashimono may be worn on the back during battle to identify them8. 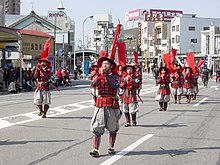 During the Ōnin War, the ashigaru gained a reputation as undisciplined troops when they looted and burned Miyako (modern Kyoto). During the subsequent Sengoku period, the aspect of battle changes from the man-to-man struggles of the samurai to the fighting groups of the ashigaru.

As a result, the ashigaru became the main force in battle and some of them rose to a higher rank. Those who receive the command of the ashigaru are called ashigarugashira (足軽頭).

The most famous of these is Toyotomi Hideyoshi, who also elevates many of his warrior disciples to samurai status. Yamauchi Kazutoyo is one of these samurai and later daimyo, coming from the ranks of ashigaru.

The ashigaru formed the backbone of the samurai armies in later periods. The real change for the ashigaru began in 1543 with the introduction of wick firearms by the Portuguese. Daimyos almost immediately began equipping their ashigaru with the new weapon, which required little training to use effectively, compared to the yumi (Japanese bows) which required many years of learning.

As battles become more complex and forces larger, ashigaru are rigorously trained to hold their ground in the face of enemy fire.

The advantage of the new powerful weapon proved decisive in samurai warfare. This was demonstrated at the battle of Nagashino in 1575 where carefully positioned ashigaru with tanegashima (Japanese wick rifles) thwarted repeated Takeda heavy cavalry charges against the Oda clan's defensive lines and broke the momentum of the Takeda war machine.

After the battle, the role of ashigaru in the armies is established as a very powerful complement to the samurai.

The advantage is used in the two invasions of Korea in 1592 and 1597 against the Koreans and later the Chinese. While the ratio of firearms (rifles) to bows is 2:1 in the first invasion, this ratio is 4:1 in the second invasion. It was thus proven that these weapons were very effective.

Following the establishment of the Tokugawa shogunate, the conscription of ashigaru fell into disuse. As the change of ashigaru into professional soldiers appeared after Oda Nobunaga, ashigaru gradually distinguished themselves from farmers.

At the beginning of the Edo period, the position of ashigaru was fixed and the use of conscripts was abandoned for more than two hundred years in Japan. Ashigaru were considered part of the samurai class in some han (domains) and not in others.