Seiza (正座, "correct sitting"), is the Japanese term for the traditional way of sitting in Japan.

To sit in seiza style, the person should first kneel on the floor with the legs bent under the thighs, resting the buttocks on the heels. The ankles are turned away from the body as the tops of the feet come down so that, in a slight "V" shape, the tops of the feet are flat on the floor and the big toes overlap, and then the buttocks are finally lowered all the way down.

Depending on the circumstances, the hands are folded modestly on the knees, placed on the upper thighs with palms down and fingers closed together, or placed on the floor next to the hips with fists closed and knuckles touching the floor.

The back is kept straight, but relaxed in a natural way. Traditionally, women sat with their knees together while men kept them slightly apart. Some martial arts, including kendo and iaidō, may prescribe up to two fist widths of distance between the knees. This 2-fist width corresponds to the distance that least stresses the knee ligaments.

Throughout Japanese history, various ways of sitting have been considered appropriate, such as sitting cross-legged, with one knee raised, or sitting on one side. Social status, type of clothing, and where people sat obviously changed the way they sat.

The development during the Muromachi period of Japanese architecture in which the floors were completely covered with tatami mats, combined with the strict formalities of the ruling warrior class for whom this type of architecture was primarily designed, heralded the adoption of the sitting position known today as seiza as the respectful way of sitting.

However, it was probably not until the years surrounding the beginning of the eighteenth century (the Genroku era to the Kyōhō era in Japanese chronology) that the Japanese generally adopted this way of sitting in their everyday lives.

In today's Japan, rooms with tatami mats on the floor where people are required to sit "properly" in this manner have become rare, and as a result, many people in Japan are not accustomed to taking this position.

Seiza requires sitting on the floor without any kind of chair. In the traditional Japanese architecture, the floors of the various rooms designed for comfort have floors covered with tatami. So seiza is closely related to this kind of floor. There are circumstances, however, that require people to sit in seiza on carpet or hardwood.

For example, in many martial arts, sitting is usually done on a hardwood floor. Depending on the convenience of the occasion, the setting and the relative status of the person, it is sometimes acceptable to sit on a special cushion called zabuton.

Sometimes stools are provided for the elderly or injured even when others are expected to sit in seiza. It is especially recommended on formal occasions to at least try seiza. Non-Japanese who have not grown up sitting in this manner may find it difficult simply to assume this position.

Those who are unfamiliar will probably find that holding seiza for more than a minute or two causes a loss of circulation accompanied by a "tingling in the legs" feeling followed by painful burning sensations and eventually complete numbness of the legs.

However, this discomfort diminishes with experience as the circulation improves. Experienced seiza practitioners can hold this position for forty minutes or more with minimal discomfort. Some pain, due to knee problems, is greatly exacerbated when this position is assumed, especially for those with Osgood-Schlatter disease.

Special stools that are placed between the feet and on which the buttocks can rest in seiza are available in Japan. They are foldable and small enough to be carried in a handbag. They give the appearance of sitting in seiza, while discreetly taking the pressure off the heels and feet.

Seiza Use in traditional arts 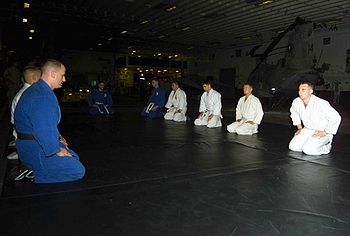 Sitting in seiza is an integral and essential part of many traditional Japanese arts, such as martial arts and the tea ceremony, although a tabletop version of the tea ceremony, called ryūrei (立礼), was invented in the 19th century.

Seiza is also the traditional way of sitting for other arts such as shodo (calligraphy) and ikebana (flower arranging), although the increasing use of Western-style furnishings means that this is not always necessary nowadays.

Many theaters, where traditional arts performances such as kabuki are given, still have sections where spectators can sit in seiza.

Walking on the feet and knees in seiza is considered more polite than standing up and doing it in the normal way. To perform this kneeling walk properly, the heels must be kept close together and the body must move as a whole: movements in shikkō (膝行) force the person to use their hips, which is considered good training in aikido.

The bent knees are on the floor and the buttocks are resting on the heels which are still supported. If the person lowers the tops of their feet to the floor, they will be in seiza.