The Tsugaru clan (津軽氏 Tsugaru-shi) was a Japanese clan originating in northern Japan, specifically in the province of Mutsu. It was called the Ōura clan (大浦氏 Ōura-shi).

Initially called the Ōura clan (大浦氏 Ōura-shi), it was part of one of several branches that made up the Nanbu clan.

Ōura Tamenobu succeeded in making the clan independent of the Nanbu during the Azuchi-Momoyama period and, after conquering the Tsugaru district, changed the clan's name.

They were on the side of the Tokugawa during the Battle of Sekigahara and in the early Edo period ruled the domain of Hirosaki. A second branch of the clan later settled in the domain of Kuroishi.

The Tsugaru survived as daimyō until the Meiji renewal when Tsugaru Tsuguakira of Hirosaki and Tsugaru Tsugumichi of Kuroishi were stripped of their titles. Their families became part of the new nobility of the Meiji period.

The Tsugaru clan claimed to be descended from the Kawachi-Genji branch of the Minamoto clan; later the declaration of origin changed to the Konoe family, which in turn was a branch of the Fujiwara clan.

Initially they were known as the Ōura clan (大浦氏 Ōura-shi), one of the cadet branches of the Nanbu clan which ruled in northern Mutsu province. Relations between the two clans deteriorated when in 1571 the Ōura declared their independence from the Nanbu clan during the leadership of Ōura Tamenobu.

Tamenobu held the position of deputy magistrate under the local control of Ishikawa Takanobu of the Nanbu clan; however, he attacked and killed Ishikawa and captured several Nanbu castles.

Tamenobu also attacked Kitabatake Akimura (another strong local figure) and captured his castle at Namioka. The Ōura clan continued to fight against the Nanbu clan, led by Nanbu Nobunao, and would continue to do so for many years.

In 1590 Tamenobu swore allegiance to Toyotomi Hideyoshi, and the latter confirmed Tamenobu in his possessions. 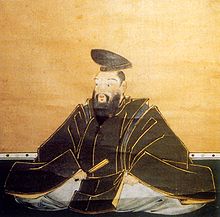 The Tsugaru clan sided with Tokugawa Ieyasu during the Battle of Sekigahara in 1600. Tamenobu however let his son Nobutake side with Ishida Mitsunari.

The Nanbu also sided with the Eastern army. After the Tokugawa victory, the Tsugaru clan increased its territories and obtained permission to maintain their domain of Hirosaki.

The small domain was initially worth 45,000 koku but was later increased to 100,000 koku. Tamenobu remained politically active in the early Edo period, especially in the Kansai region; he died in Kyoto in 1608. He was succeeded by his third son Nobuhira.

In 1821 there was an attempt by Sōma Daisaku, a former servant of the Nanbu clan, to assassinate the Tsugaru daimyō; this shows that the rivalry between two clans was still strong after more than two centuries.

The major branch of the Tsugaru was founded in 1656, first given the rank of hatamoto before being promoted to the status of daimyō in 1809; this branch became the dominant family of the Kuroishi domain, which immediately limited the power of the original family.

A minor branch was founded by Tsugaru Nobuzumi, son of the first head of the Kuroishi domain; this branch remained hatamoto until the end of the Edo period.

The main temple where the main Tsugaru family is buried is located in Chōshō-ji. Although no Tsugaru family ever held an office in the Tokugawa shogunate, the Tsugaru of Hirosaki (along with many other clans in northern Honshū) helped the shogunate control the border region of Ezochi (now Hokkaidō).

During the Boshin War of 1868-69, the Tsugaru clan initially sided with the Imperial forces and attacked the nearby Shōnai domain forces. However, it soon switched sides and was among the signatories of the Ōuetsu Reppan Dōmei before leaving it and rejoining the Imperial faction.

They never took part in military actions against Imperial forces. The Kuroishi branch allied itself with the Hirosaki-Tsugaru and sided with the imperial forces.

As a result, the entire clan avoided the punishments that the imperial government enacted against many of the domains that signed the Ōuetsu Reppan Dōmei.

When northern Honshū was pacified the Tsugaru forces joined the imperial armies in attacking the Ezo Republic in Hakodate. As a reward for their assistance, the Meiji government granted the Tsugaru of Hirosaki an increase of 10,000 koku of their fiefdom.

Both branches of the Tsugaru became imperial officials (藩知事 han chiji) of their domains in 1869. Two years later, along with all other daimyō, the han were abolished with the abolition of the han system.

Princess Hitachi is a direct descendant of the main branch of the Tsugaru family.