The Shimazu clan (島津) refers to the clan name of the daimyō of the Satsuma region (han), which spanned the Japanese provinces of Satsuma, Ōsumi and Hyūga.

The Shimazu clan was founded by Koremune Tadahisa (1179-1227), who was granted the Shimazu shôen - domain - in 1185, and decided to take the name of Shimazu Tadahisa.

He received the Shioda domain in Shinano province in 1186 and was appointed shugo - protector - of Satsuma province. He was also appointed shugo of southern Kyushu by Minamoto no Yoritomo in 1187.

He sent Honda Sadachika to take possession of Satsuma province on his behalf and accompanied Yoritomo on his expedition to Mutsu in 1189. He returned to Satsuma in 1196 and subdued the provinces of Hyuga and Osumi, building a castle at Hyuga.

It was once believed that Shimazu Tadahisa was an illegitimate son of Yoritomo with Hiki Yoshikazu's sister, a story that was almost completely abandoned by the end of the Edo Period.

Tadahisa's wife was the daughter of Koremune Hironobu, a descendant of the Hata clan, whose name Tadahisa took before changing it definitively to Shimazu.

The Shimazu shôen from which the clan takes its name had been established by Taira no Suemoto in the 11th century and had grown to encompass up to half of the territory of Satsuma, Ôsumi and Hyûga provinces.

The estate was taken from the Taira and given by Yoritomo to Shimazu, who also became shugo - protector and governor - of that territory; although he was originally appointed daikan - magistrate - to administer this territory for them, after the Mongol Invasions, the Shimazu, like many other clans, moved from Kamakura to Kyushu, where they began to exercise more direct control over their holdings.

Fighting their rivals politically and militarily, the Shimazu began to consolidate their power in southern Kyushu. The Shimazu lose control of Ûsumi and Hyûga in wars against the Hiki clan, regaining them under Shimazu Motohisa (1363-1411).

Meanwhile, the clan itself split into two contending factions after the death of Shimazu Sadahisa (1269-1363), with Sadahisa's third son Shimazu Morohisa becoming shugo of Satsuma and leading the Sôshû branch, while the fourth son, Shimazu Ujihisa, became shugo of Ôsumi and leader of the Ôshû branch of the family.

Both families fought for the Northern Court in the Nanbokuchô Period wars against Imagawa Ryôshun, who was the tandai - government representative - of Kyûshû and the Kimotsuki, Nejime, Taniyama and Ijûin clans.

however, when they were betrayed by Imagawa in the Mizushima incident, they vlviern to separate from him, and the two branches united in opposition to Imagawa until the latter was dismissed from his post as tandai of Kyûshû in 1395.

The two branches turned against each other and the Ôshû branch, based in Ôumi province, gradually expanded within Satsuma, until the Sôshû branch finally ended with the suicide of Shimazu Hisamori in 1430 at Takamitsu castle.

The Ôshû branch then went on to become the main line of the clan, and brought all three provinces under its rule.

Throughout this period, the Shimazu maintained the practices of the elite samurai, such as banquets in the style of the Kamakura Period (1192-1333), expressing their pride and complete adherence to tradition, even as practices changed in the rest of the archipelago.

However, they also maintained connections to new cultural developments, despite their remote geographic location, through connections with the Konoe family and others, even as Kyoto fell into chaos.

The death of Shimazu Tatsuhisa in 1474 led to increased tensions and conflict between two clan factions led respectively by Shimazu Kunihisa and Shimazu Suehisa and, in 1484, open warfare broke out in southern Kyushu, along with conflicts between Isaku Hisatoshi and Niiro Tadatsugu.

Kimotsuki Kanehisa would also rise in rebellion in 1506, pushing Shimazu Tadamasa, clan leader at the time, to make the decision to commit suicide the following year.

They also defeated the Itô clan in 1577 to claim control over certain areas of Hyûga province and Ôtomo Sôrin the following year at the Battle of Mimigawa.

In 1586, Yoshihisa led his forces against the Ôtomo in Bungo province, while Yoshihiro attacked Bungo in Higo province, and his younger brother Shimazu Iehisa moved from Hyûga.

They quickly isolated the Ôtomo vassals and, in short order, seized most - if not all - of Ôtomo territory. They even defeated an allied force of Ôtomo and Toyotomi forces to advance further after the battle of Hetsugigawa.

The Shimazu also defeated Sagara Giyô and Ryûzôji Takanobu of Higo and Hizen provinces, and expanded into northern Kyushu, but began to find themselves overstretched, physically and financially, so that in 1587 Toyotomi Hideyoshi began to challenge them for control of Kyushu.

Before the Shimazu could complete their conquest of the island, they began to suffer defeats, and Hideyoshi's Kyushu Campaign ended with him securing control of the entire island.

Preparing banquets for Hideyoshi, and entertaining or entertaining him in other ways, the Shimazu, despite their pride in maintaining the older samurai traditions, were forced more than ever to adopt and practice the new ways of the elite samurai.

Although officially allied with the Western Army in the Battle of Sekigahara (1600) against Tokugawa Ieyasu, neither Shimazu Iehisa (Tadatsune) nor his brother Shimazu Yoshihisa actually contributed to the battle.

As a result, and probably due to the great power of the house of Shimazu and the remote location of their holdings, Ieyasu allowed them to retain their territories under the newly established Tokugawa hegemony.

They were also received in audience by Hidetada at Edo Castle in 1607, to reaffirm their loyalty once again and to mark the beginning of a regular pattern of regular trips to Edo as attendants to the Shogun, several years before it was declared mandatory for a broader subset of leading daimyo.

The nineteenth leader, Yoshihiro (1535-1619), was the daimyo at the time of the Battle of Sekigahara, the establishment of the Tokugawa Shogunate and the Siege of Osaka (1615). His successor was his nephew Shimazu Tadatsune.

During the first two decades of the 17th century, he had great influence and organized the invasion of Ryukyu Kingdom (today's Okinawa region) in 1609. Tokugawa allowed it as compensation for abstaining in Sekigahara and to prevent a possible uprising.

The commercial benefits thus acquired and the political prestige of being the only family to control an entire foreign country secured the clan's position as one of the most powerful in Japan, controlling the han -domain- of Satsuma, with a kokudaka (revenue) of 770,000 koku, the second largest of all domains.

The Shimazu clan of the Sengoku period was famous for the loyalty of its officials and officers. Some servant families, such as the Ijuin and Shirakawa, were fiercely determined to defeat any opposition to help expand the power of the Shimazu clan.

The other great vassal families of the Shimazu were the Niiro, Hokugo, Machida, Kawakami, Ata and Kajiki. The Shimazu are also famous for being the first to use firearms (arquebuses) on Japanese battlefields, and began domestic production of these weapons as well.

The Shimazu's battle tactics are known to have been very successful against larger enemy armies, particularly during their campaign to conquer Kyoshu in the 1580s.

Their best known tactic was to lure the enemy into an ambush, being attacked by troops armed with arquebuses on both flanks, creating panic and disorder. The central forces would be deployed to defeat the enemy. In this way, the Shimazu were able to defeat more powerful clans such as the Ito, Ryuzuji and Otomo clans.

Overall, the Shimazu was a very large and powerful clan thanks to its strong economy, both from domestic production and through trade, the good organization of government and troops, the unwavering loyalty of its vassal families and the isolation of the island of Kyûshû with Honsho. 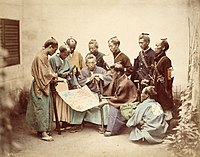 The Shimazu clan is renowned for the loyalty of its servants and officers, especially during the Sengoku era. Some clans under their rule, such as the Ijuin and Shirakawa clans, were very determined to overcome any opposition to the Shimazu clan's expansion plans.

The Shimazu were also famous for being the first to use firearms (arquebuses) in confrontations in Japan and also for starting the construction in Japan of such weapons.

Shimazu battle tactics were known to be very effective in allowing them to inflict serious defeats on larger armies, particularly during the campaign to conquer Kyūshū in the 1580s.

His tactics included luring the enemy into ambushes from both flanks by troops armed with arquebuses, which created great panic and confusion in the enemy.

This was followed by an attack by forces from the center that ravaged the enemy troops. In this way, the Shimazu clan was able to defeat much larger clans such as the Itō, Ryūzōji and Ōtomo clans.

In summary, the Shimazu clan was a large and extremely powerful clan thanks to: its robust economy both in terms of domestic production and commercial activities, its good organization in terms of government and troop management, great loyalty of its serfs and clans under its rule, and its isolation from Honshū.

The thirty-first head of the Shimazu clan, Hisamitsu (1817-1887) was the daimyō of Satsuma at the time of the Boshin War and the Meiji Restoration, in which Satsuma played an important role.

Shimazu Clan‎ The order of succession