The Matsumae Clan (松前氏 Matsumae-shi) was a Japanese clan that was granted the area of Hakodate and vicinity in Hokkaido as a border mark in 1590 by Toyotomi Hideyoshi.

They were charged with defending their territory and, by extension, all of Japan from the northern "barbarian" Ainu. The clan, originally known as the Kakizaki clan (蠣崎氏 Kakizaki-shi), inhabited the areas of Kakizaki, Kawauchi and Mutsu on the Shimokita peninsula.

Claiming to be descended from the Takeda clan of Wakasa Prefecture, the clan later changed their name to Matsumae.

In 1778 a merchant from Yakutsk named Pavel Lebedev-Lastochkin arrived in Hokkaido with a small expedition. He offered gifts and politely asked to trade.

The Matsumae official tried to explain that he did not have the authority to agree to this in place of the shogun and suggested that the Russians return the following year.

In September of the next year, the Russians returned. According to some accounts, they misunderstood what had been said and expected to be able to trade.

Instead, their gifts were given back, they were forbidden to return to the island, and they were warned that trade with foreigners was allowed only in Nagasaki.

In 1790, a great earthquake struck Hokkaido and a tsunami of more than 12 meters carried the Russian ship from the sea to more than 400 meters on land. The merchant Lebedev then gave up Hokkaido. 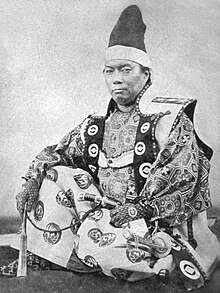 The Matsumae clan fiefdom had frequent contact with the Ainus and had exclusive trading rights with their communities to ensure the security of Japanese interests in Hokkaido.

Relations between the Matsumae and the Ainu were sometimes hostile, demonstrating that their power was not absolute in the region. In 1669, what had begun as a feud over resources between rival clans of the Ainu developed into a rebellion against the Matsumae's control over the region.

The Shakushain Revolt lasted until 1672, when it was put down. The last serious rebellion of the Ainus was the Battle of Menashi-Kunashir in 1789.

In 1790, Kakizaki Hakyo painted the Ishu Retsuzo, a series of portraits of Ainu chiefs, to prove to the Japanese population that the Matsumae were capable of controlling the northern borders and the Ainu. The twelve portraits were exhibited in Kyoto in 1791.

About the same time, in 1789, a Finnish professor, Erik Laxmann, from the Russian Academy of Sciences, came across several Japanese castaways in Irkutsk.

Laxmann saw in their requests an opportunity for the opening of Japan, and suggested this to Catherine the Great, who agreed. In 1791, she appointed the professor's son, Lieutenant Adam Laxmann, as commander of a voyage to take the castaways back to Japan and to discuss proposals on trade agreements.

The expedition arrived in Hokkaido in October 1792. The Russians were allowed to overwinter and documents about them were sent to the bakufu in Edo.

However, Laxmann insisted on taking the castaways to Edo and said he would sail there even against the shogun's wishes. The bakufu sent an emissary to the Matsumae, asking the Russians to go to the city of Matsumae by land.

Sensing a trap, the Russians denied and were eventually allowed to dock at Hakodate, accompanied by a Japanese vessel.

They were granted a guesthouse near Matsumae Castle and were allowed to keep their customs:they did not deny their Christianity, did not remove their shoes when inside houses or bow down before emissaries from the shogun.

The Japanese emissaries presented them with three swords and a hundred sacks of rice, but also informed them that the rules determined by the shogun would not change:

foreigners could trade only in Nagasaki and only when they came unarmed. All other vessels would be subject to seizure. Laxmann was pardoned in that case for his intention to return the castaways, but he refused to hand them over until he was given something in writing answering his trade-related requests.

The emissaries returned three days later with a document restating the rules about trade in Nagasaki and about the laws against practicing Christianity in Japan.

The Russians never established any regular system of trade in Nagasaki, and historians to this day debate whether the document given to Laxmann was an invitation to trade or an evasive maneuver by the shogunate.

The Russian expedition led by Adam Johann von Krusenstern and Nikolai Rezanov stayed for six months in the port of Nagasaki from 1804 to 1805, failing to establish diplomatic and trade relations with Japan.

Since the Matsumae territory was a march or frontier, the rest of Hokkaido, then called Ezo, essentially became an Ainu reservation.

Although Japanese influence and control over the Ainu gradually became stronger over the centuries, at that time they were left to their own devices and the shogunate did not consider their land as Japanese territory.

It was only during the Meiji Restoration in the late 19th century that the march was dissolved and Hokkaido was formally annexed and renamed by Japan.