The tanegashima (種子島), also known as the hinawajū (火縄銃), was a type of arquebus introduced to Japan by the Portuguese in 1543.

The tanegashima were employed by the samurai and their infantry (ashigaru), so within a few years the introduction of the tanegashima in battle forever changed the way warfare was conducted in Japan.

The tanegashima appears to be based on arquebuses with "biting" fuse keys that were produced in the armory at Goa in Portuguese India, which was captured by the Portuguese in 1510.

The name tanegashima comes from the Japanese island of Tanegashima, where a Chinese junk with Portuguese adventurers aboard took refuge from a storm in 1543.

The lord of the island, Tanegashima Tokitaka (1528-1579), bought two arquebuses from the Portuguese and ordered a swordsmith to copy the gun's barrel and firing mechanism.

The gunsmith (Yaita) had little trouble with most of the gun but "drilling the barrel helically so that the bolt (bisen) could be screwed in" was a big problem, as this "technique was apparently unknown in Japan up to that time."

The Portuguese repaired their ship and departed the island, only to return the following year with a Portuguese blacksmith to solve the problem. Within only ten years of its introduction, 300,000 tanegashima were reportedly manufactured.

Numerous old and aristocratic families despised these weapons at first as unbecoming of a samurai. But they soon changed their minds, or else were annihilated by other, less idealistic clans.

The Japanese version of these arquebuses was called "Teppô" or "Tanegashima", after the name of the area where the Europeans arrived with them. The blacksmiths there were in good conditions to start making them, as they had black sand beaches with a high iron content.

The daimio of the center and west of the country gained an advantage over their eastern rivals with the spread of these weapons, since they had greater facilities to buy them and import the ingredients of gunpowder.

One example was the Ashikaga family, who received the weapons from the daimio of Tanegashima, and gave them in turn to their supporters along with the gunpowder formula. Some other families without such ties to the Ashikaga had to resort to various stratagems to get hold of them.

The Matsura (small daimio of northern Kyusho) had two of their samurai converted to Christianity in order to secure the trust of the Portuguese and to make trade deals.

The manufacture of teppô was expensive, and at first the smiths were generally subjected to such constant surveillance and supervision that only authorized lords could commission them (or members of secret ninja guilds) and even then, on a severely limited scale.

The priests of Negorojoi got their hands on a Japanese arquebus in 1543, and their blacksmiths set up a forge to reproduce it to a force of 300 marksmen in 1570.

Thanks to the talents of these blacksmiths, steel cannons were soon being made by the coiling technique, and a group of them, the Kunitomo, managed to devise a process whereby a screw could be slowly inserted into a red-hot barrel in preparation for rifling, a very important and complicated process that greatly increased the efficiency and accuracy of the weapon.

Rifling was already an extraordinarily difficult task for European blacksmiths in the early 16th century, and this Japanese method of inserting a screw does not appear to have been common in England until 1635.

When reproduced by Japanese blacksmiths, the arquebuses introduced by the Portuguese became a wide and varied range of firearms.

The Japanese preferred arquebuses with curved butts and tried to improve firing accuracy rather than increase the rate of fire. A rifled tanegashima could shoot at a distance of 1,000 m, which far exceeded the range of the bows, but its effective range was 100 m and accuracy was limited to about 50 m.

Even much later, in 1775, these tanegashima could not be fired accurately at greater distances. The fact that these weapons had to undergo a period of testing suggests that their advantages were not immediately apparent.

They were heavy and expensive, and took several minutes to load. In both Europe and Japan there was controversy over the superiority of firearms and the bow or crossbow, although the former eventually triumphed.

-arquebuses reached parity with bows, but only began to be an effective weapon when marksmen were organized into cohesive groups, a process that did not begin until the 1570s.

-From 1590 the use of firearms changed dramatically. And by 1600 they almost completely replaced bows, inflicting 80% of wounds in skirmishes.

-The arquebus is most efficient when fired in close bursts, loading and firing in rows (usually three). For this to work, it is necessary for the troops to maintain strict discipline.

-Hamaza-zutsu - Wall or gunwale arquebuses with a length ranging from 1.5 to 2 meters and a caliber greater than 10 monme (approximately 18.5 mm).

-Hiya-zutsu: A kind of mortar that launches the bo-hiya, a kind of incendiary arrow.

-Chyu-zutsu - It is said that it was the weapon of the samurai, meaning a weapon of prestige, of similar length to the Ban-zutsu, but of superior caliber (between 15 and 18 mm) and quality in the materials and decoration.

-Bajou-zutsu - Around 40 or 60 cm, we could consider it as a carbine. Designed for use on horseback, they were extremely complex to handle with one hand. In some treatises (Inatomi), there are explanatory drawings of the way in which riders should use the bajou-zutsu.

-Tanzutsu: Similar in style to the pistol, they are used with one hand. Without uniformity in the caliber, although generally medium, being able to oscillate between the 8.5 or 18 mm. Below 40 cm in length, their size varies from very short (pocket) to pistol carbines. 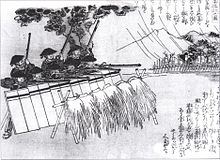 Most of Japan was engaged in internal wars during the Sengoku period (1467-1603), as feudal lords fought for supremacy. Wick weapons were introduced in the middle of this period and after their entry into combat, they were widely used toward the end of the period and played a decisive role in warfare.

In 1549, Oda Nobunaga ordered 500 arquebuses to be made for his armies. The benefits of firearms were still relatively questionable, relative to other weapons.

At that time, firearms were still quite primitive and bulky. According to one estimate, in 16th century Japan, an archer could fire 15 arrows in the same time it would take an arquebusier to load, aim and fire his weapon.

Moreover, the effective range was a mere 80-100 m, a distance at which it was easy for a bullet to ricochet off armor. Fuse weapons were vulnerable in wet and rainy weather, because the powder could get wet, but one advantage was that the firearms could be effectively employed by peasants or low-ranking soldiers.

The Japanese quickly devised various techniques to improve the effectiveness of their arquebuses. They developed a serial firing technique to create a continuous rain of bullets on the enemy.

They also developed large calibers to increase their lethality. Protective lacquered wooden boxes were invented to cover the fuse key, which allowed firing during rain, as well as systems for firing the arquebuses at night, which maintained fixed angles by means of ropes of varying length.


In 1563, the Amako clan of Izumo province defeated the Kikkawa clan, with 33 of their opponents wounded by tanegashima, so that in 1567 Takeda Shingen declared, "Therefore, arquebuses will be the most important weapons, thus reducing the number of spears per unit and having their most capable men equipped with arquebuses."

Oda Nobunaga used the tanegashima at the Battle of Anegawa (1570) and again against the powerful Takeda clan at the Battle of Nagashino (1575), where 3,000 arquebusiers helped win the battle, firing 1,000 shots at a time.

They were hidden across a river and employed parapets to effectively stop infantry and cavalry charges while being protected. The defeat of the powerful Takeda clan brought permanent changes to battle tactics.

Japan became so enthusiastic about the new weapons that they possibly surpassed every European country in total production numbers. Japan also employed arquebuses in the Japanese invasion of Korea in 1592, where a quarter of the invading force of 160,000 men were arquebusiers. They were extremely successful at the outset and managed to capture Seoul just 18 days after landing at Busan.

The internal war for control of Japan was won by Tokugawa Ieyasu, who defeated his rivals at the Battle of Sekigahara in October 1600. Three years later, he established the Tokugawa Shogunate, a powerful entity that would maintain peace, stability and prosperity in Japan for the next 250 years.

This is known as the Edo period (1603-1868). From the mid-17th century, Japan decided to isolate itself from the Western world, as well as from China and Korea through its Sakoku policy. Contrary to popular belief, this did not cause Japan to "give up firearms".

In fact, arquebuses were employed less frequently because during the Edo period there were no major conflicts where they could be of use. Often, the sword was simply the most practical weapon in the average small conflicts of the Edo period.

It should also be noted that isolation did not reduce the production of firearms in Japan; on the contrary, there is evidence of some 200 gunsmiths in Japan by the end of the Edo period.

With no external enemies for over 200 years, tanegashima were primarily employed by samurai for hunting and target shooting, most being relegated to the arsenals of the various feudal lords (daimyō).

The arrival in Japan of a U.S. Navy squadron under the command of Commodore Perry in 1854 ushered in a period of rearmament.

The tanegashima was an antiquated weapon by the early 19th century and various samurai factions purchased modern firearms, including the Minié rifle, breech-loading rifles and repeating rifles.

The era of the samurai ended in 1868 with the beginning of the Meiji Era, when the Japanese switched to a national conscript army with modern weapons and uniforms.

Japan's last employment of traditional samurai armor and weapons, including tanegashima, was during the Satsuma Rebellion (1877), when the Meiji government's newly established Imperial Japanese Army wiped out the last samurai and their resistance to modernization.

Today tanegashima are available through antique weapons and samurai equipment dealers both in Japan and in the West. Japanese historical reenactors stage battles where the tanegashima was used, and muzzle-loading gun enthusiasts employ the tanegashima for target shooting.[citation needed]

Parts of the tanegashima