Stories about them reached Japan along with other Chinese beliefs. After the legends of dragons spread, they began to take over, in part, the role of what were considered water deities. Influenced by Chinese legends of flying dragons that could also dive, the inhabitants of the archipelago considered the appearance of such a being in the sky as a good omen.

The dragon god Ryūjin was named for the ruler of the seas Watatsumi, whose daughter the mythical Japanese ruler Ninigi was supposed to marry. Later there were shintō legends that the king of all dragons sending rainfall is Zennyo Ryūō.

In Japanese legends the rulers of the ponds were usually dragons who could take the form of a beautiful girl with an unnaturally long face, although according to some legends they also appeared as old and repulsive women. It was also believed that women who commit suicide for love could become white dragons after death.

The Japanese believed in the existence of stones from which water continuously flows. According to legends, they were inhabited by the dragon Ryūshōseki. It is said that in 1762 such a stone was found and boiled, and a dish was prepared from the dragon fetus inside.

There are also records of a small dragon hatching from the stone resembling a small larva, which initially took on a lizard-like form before turning into a winged dragon.

The word ryū / tatsu meaning dragon first appeared in chronicles from the Dazaifu area of Kiusiu, where there was an unusual pond. There was an unusual pond in Dazaifu, where water never came to the pond nor did it go away due to a local deity called Takeiwa-no-Tatsu ("Dragon of the Massive Rock"), who lived there.

According to chronicles, in 864 a geyser erupted, the water gushed upwards and stained the eastern part of the shoreline with a red smear that covered grass and trees for many days.

The diviners concluded that this was a prelude to an epidemic caused by the wrath of the water deity. The emperor considered it an omen indicating that he was ruling the country improperly, so he ordered various religious ceremonies to be held to prevent further misfortunes.

A young scientist named Akira Hagiwara wanders around Japan collecting legends until one day he meets an old man named Yatabei who claims to be the guardian of the Demon Pond and has to strike a bell three times a day at certain times so that the dragoness living in the pond will not flood the villages in the valley.

Shortly after this meeting, the old man died, and Akira decided to take his place and keep the ruler of the pond from sinking the valley. He married the daughter of the village priest and settled near the pond. After some time, the village began to experience a drought, and the villagers decided to lure the dragon out of the lake, they began to pollute the pond, but it had no effect.

They decided to sacrifice the most beautiful girl in the area - Akira's wife, who knew well the story of the previous victim: the latter drowned in the pond out of shame and, according to legend, became a dragoness. Akira tried to stop the locals, but they rushed at him and wanted to kill him.

The terrified woman stabbed herself with a knife, and the grieving man stopped ringing the bell and the entire valley was flooded by rough waters gushing from the bottom of the Demon Pond. 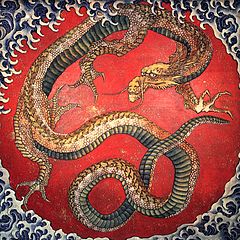 Yamata no Orochi (Japanese: 八岐大蛇、八俣遠呂智、八俣遠呂知 Eight-branched Giant Snake) or Orochi (Giant Snake) is a legendary monster with eight heads and eight tails. He intimidated a pair of earth deities and ordered them to give him one of their daughters each year. He was tricked into killing Susanoo near the source of the Hi River (簸川 Hi-kawa), in Izumo Province. The god of storms got the monster drunk with sake and then, when the beast fell asleep, cut it into pieces with his sword. Inside the snake was the Sword-Trail, which the deity of the seas gave to her sister, Amaterasu.

Watatsumi (Japanese: 海神 God of the Seas), also known as Ryūjin (Japanese: 龍神 Dragon God), was the ruler of the seas and oceans, known by humans as a dragon who could assume human form. He lived in the Ryūgū-jō (Japanese: 龍宮城 Dragon Palace) at the bottom of the sea, where he kept a miraculous pearl with which he could control the waves.

Toyotama-hime (Japanese: 豊玉姫) better known as Oto-hime - the beautiful daughter of Watatsumi, the dragon king. She married a man named Hoori whom she met near the Dragon Palace, where she helped him find a missing hook.

The grateful boy married Oto-hime and they went to live in the Dragon Palace. Toyotama-hime bore him a son, who was the father of Jimmu, the first emperor of Japan. Shortly after giving birth to the child, she was set upon by her husband in her true form, then, ashamed in the form of a dragon, she flew away to her father's palace.

Wani (Japanese: 鰐) is a sea monster found in stories in both Kojiki and Nihon-shoki. He was one of Watatsumi's servants and was chosen to escort Oto-hime and Hoori when they decided to leave the Dragon Palace and head back to land.

Zennyo Ryūō (Japanese: 善女龍王) is a dragoness who appeared to the founder of the shingon school, Kūkai, while performing a prayer for rain at Tōdai-ji Temple in Nara. According to legend, in 1335 the dragon Zentatsu appeared to Emperor Go-Daigo warning him of an attempt on his life.

Nure-onna (Japanese: 濡女 Wet Lady), a snake measuring over three hundred meters with a female face. The Wet Lady had long hair and had venomous teeth and a long tongue protruding from her mouth; according to legend, no one ever managed to escape from this creature, as the dragoness effectively immobilized her victims with her large tail.

Kiyohime (Japanese: 清姫) was a waitress at a tea shop who fell in love with a young Buddhist monk. After he rejected her, she began studying magic, turned into a dragon and killed him.

Inari (Japanese: 稲荷) is a Japanese deity of fertility and rice, often depicted as a snake or dragon accompanied by foxes.

Tarō Urashima (Japanese: 浦島太郎 Urashima Tarō) - a young fisherman who saved a turtle, for which he was rewarded with a visit to the palace of the ruler of the seas (Ryūgū-jō), located at the bottom of the ocean.

Chinese-Japanese Dragons
Many of the names of Japanese dragons are derived from Chinese. For example, the Japanese equivalents of the astrological Four Symbols are:

The Japanese Shiryū are the legendary Chinese Dragon Kings of the seas: