He was the son of Jomei Tennō and Empress Saimei, and younger brother of Tenji Tennō. His birth name was Prince Ōama (大海人皇子 Ōama no ōji). Empress Jitō, who succeeded him to the throne, was his wife and niece.

During the reign of his elder brother, he was forced to marry several of Emperor Tenji's daughters, as the emperor felt that the marriages would strengthen the political power between the two brothers.

With Prince Kusakabe, Emperor Tenmu had two emperors and two empresses over his descendants. Empress Shōtoku was the last of the empresses to come from that line. 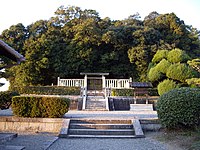 Tenmu Tennō was the first emperor of Japan, who held the title of tennō contemporaneously.

The first and only document outlining his life was the Nihonshoki. But, as it was edited by his son, Prince Toneri, and said work was written during the reigns of his wife and children, causing problems of neutrality and impartiality.

His father, Jomei Tennō, died when the prince was young, and he grew up under the guidance of Empress Saimei. He had no thoughts of assuming the throne, as his brother, the future Emperor Tenji, was the Crown Prince.

When Emperor Tenji assumed the throne, Prince Ōama was appointed Crown Prince, as the emperor considered his sons unfit to assume the throne, as were their wives.

Emperor Tenji considered his brother to be more ambitious with the country's political decisions.

In 671, Prince Ōama was in danger and voluntarily resigned as Crown Prince and became a monk. He moved to the mountains in Yoshino, Yamato Province (present-day Nara Prefecture), with the aim of seeking seclusion.

He moved with his children and one of his wives, Princess Unonosarara; but he left his other consorts in the capital at Ōmi-kyō, in Ōmi (present-day Otsu) province.

Prince Ōama assembles an army and moves from Yoshino in an easterly direction and attacks Ōmi-kyō in a move against the clock. They march on Yamato, Iga and Mino provinces and reach the capital.

The armies of Prince Ōama and Emperor Kōbun fight in northwestern Mino (in present-day Sekigahara. The prince's army wins in battle and the emperor is forced to commit suicide. This event is known as the Jinshin Incident.

In historical documents prior to the Meiji era, Emperor Kōbun was considered to be a pretender or an intruder and Prince Ōama received the succession outright upon the death of Emperor Tenji.

Following the recognition of Emperor Kōbun as the rightful emperor by Emperor Meiji in 1870, the succession to the throne was corrected, where Prince Ōama ascended the throne after the death of Emperor Kōbun in 672. He would assume the name Emperor Tenmu.

Emperor Tenmu followed the same approach to the development of military institutions initiated by Emperor Tenji during the Taika reform. He organized a centralized war department,

strengthened the defenses located around the capital, castles and forts would be built near the capital and in western Honshu and Kyushu, established the review of troops, and all provincial governors were ordered to complete the collection of weapons and the study of tactics.

In 673, the emperor moved the capital to Yamato Province on the Kimihara Plateau, calling his new capital Asuka.

In Asuka, Emperor Tenmu was enthroned, and he elevated Princess Unonosarara as his empress. She would reign from this city until her death.

According to the Nihonshoki, Emperor Tenmu was described as a great innovator, but the neutrality of this description is doubtful, since the work was written under the patronage of his descendants.

One thing that is clear is that the emperor sought to strengthen imperial power by assigning his sons to key government posts and reducing the traditional influence of the Ōtomo and Soga clans, which held power during the Yamato period.

He renewed the kabane system, which was the system of hereditary ranks and titles, but with some modifications, including the abolition of some titles.

The Omi and Muraji, who were the highest titles at the time, were reduced in value in the new hierarchy, which consisted of eight classes of kabane. Each clan received a new kabane, according to their closeness to the imperial line and their loyalty to the emperor.

He also allowed a balance of power over his sons, went on a journey to Yoshino together with his sons, and between them all promised to cooperate with each other and not to declare war against each other.

This agreement did not pay off: one of his sons, Prince Ōtsu, was executed for treason after Emperor Tenmu's death.

Emperor Tenmu's foreign policy favored the Korean kingdom of Silla, which had conquered the entire Korean peninsula in 676.

After the unification of Korea by the Silla kingdom, Emperor Tenmu decided to break off relations with Tang dynasty China in order to satisfy relations with Silla.

The emperor used religious elements to increase authority over the empire. During his reign there was a growing relationship with the Imperial Household and the Great Shrine of Ise (dedicated to the Shinto goddess of the Sun and ancestral descendant of the emperors, Amaterasu).

His daughter, Princess Ōku was appointed with the new title of saiō of the shrine, and several festivals were funded from the national budget. The emperor was also a supporter of Buddhism and built several large temples and monasteries. In addition, he banned hunting and fishing, implying his concern for animals.

All Buddhist monks, priests and nuns were controlled by the state, and no person would become a monk without the permission of the state. This measure was done in order to prevent cults and to prevent farmers from becoming monks.

Kugyō (公卿) is the collective term for the most powerful personages directly attached to the service of the emperor in pre-Meiji Restoration Japan. They were hereditary courtiers whose experience and prestige had brought them to the top of the courtly ladder.

Much of Emperor Tenmu's reign is not in an era or nengō. The idea of naming eras since the Taika reform in 645 was discontinued during his reign, although it was reinstated during his last year of reign.