Like all other Japanese emperors, since his death he has been known by a posthumous name which, according to a practice dating from 1912, is the name of the era coinciding with his reign.

After his death, Yoshihito became known as Emperor Taishō.

He was the surviving son of Emperor Meiji and Yanagihara Naruko, a lady-in-waiting at the Imperial Palace. Emperor Meiji's consort, Empress Shoken (Haruko), was officially considered his mother.

He received the personal name Yoshihito and the title Haru no miya (Prince Haru) from the emperor on September 6, 1879. He was officially declared heir apparent on August 31, 1887 and had his formal investiture as crown prince on November 3, 1888.

From March 1885, Prince Yoshihito moved to Aoyama Palace, where he received lessons in the morning in reading, writing, arithmetic and morals, and in the afternoon in sports, but progress was slow due to the prince's poor health and frequent fevers.

From 1886 he began to be taught, along with selected colleagues from ōke and high officials in a special school, Gogakumonsho, inside the Aoyama Palace.

He was officially declared heir apparent on August 31, 1887, and had a formal investiture as crown prince on November 3, 1888. As crown prince, he was known as Tōgu (東宮).

In September 1887, the prince entered the elementary department of Gakushuin School, but due to his health problems, he often interrupted his studies. He spent most of his youth by the sea, in the imperial villas of Hayama and Numazu for health reasons.

Beginning in 1898, at the insistence of Itō Hirobumi, the Prince began attending sessions of the Japanese Diet Chamber as a way of learning about the country's economic and military concerns.

In the same year he gave the first official receptions to foreign diplomats, whom he greeted and spoke to. His interest in Western culture and tendency to include French words in conversations were a source of irritation to the Meiji Emperor.

In 1899 he made another visit to Kyūshū, visiting government buildings, schools, and factories such as the Fukuoka and Mitsubishi shipyards in Nagasaki.

On May 25, 1900, Crown Prince Yoshihito married Sadako Kujō (the 16-year-old future Empress Teimei, daughter of Prince Kujo Michitaka, head of the five ancient branches of the Fujiwara clan); four children would be born of this marriage.

In 1902, Yoshihito continued his tours to observe the customs and geography of Japan, this time in central Honshū, where he visited the remarkable Buddhist temple of Zenkō-ji in Nagano.

His military duties were only ceremonial, but that year he traveled to inspect military installations in Wakayama, Ehime, Kagawa and Okayama.

In October 1907, the Crown Prince toured Korea, accompanied by Admiral Tōgō Heihachirō, General Katsura Tarō, and Prince Arisugawa Taruhito. It was the first time an heir apparent to the throne had left Japan.

Yoshihito had contracted meningitis shortly after birth, leaving him in poor health both physically and mentally. On July 30, 1912, following the death of his father, Emperor Meiji, Prince Yoshihito ascended the throne.

The new emperor kept out of public view as much as possible; after suffering from various neurological problems throughout his life, by the late 1910s, these illnesses made it increasingly impossible for him to perform public functions.

On one of the rare occasions when he was seen in public, at the 1913 opening of Japan's Imperial Diet, he is said to have rolled his prepared speech into a cylinder and looked at the assembly through it, as if through a spyglass.

Although rumors attributed this to a poor mental condition, others, including those who knew him well, believed that he may have been checking to make sure the speech had been rolled correctly, as his manual dexterity was also at a disadvantage.

On August 23, 1914, Japan entered World War I after declaring war on Germany. However, its participation was restricted to Asia only. Even so, the country was increasing its international prestige and its territories in Asia and the Pacific Ocean by its modest participation in the conflict.

The participation of Western forces in the Great War provided Japan with the opportunity to seize German colonies located in China and the Pacific.

In addition, Japan pressured China to make further territorial concessions in its favor. In 1915, the Chinese not only granted control of Shandong (a German possession) but also Manchuria and Mongolia.

In 1918, Japan was invited to participate, as one of the "great countries", in the Versailles Peace Conference, thus fulfilling its long-standing ambition to sit side by side with the great powers.

On that occasion, it was given control over Shandong and the Pacific Islands and secured a seat on the Council of the League of Nations.

His lack of articulation and charisma (in contrast to the Meiji emperor), his disabilities and his eccentricities, led to an increase in incidents of lèse majesté.

As his condition deteriorated, he had less and less interest in day-to-day political affairs, and the ability of the genrō, the Keeper of the Privy Seal, and the Minister of the Imperial Household to manipulate his decisions became a matter of common knowledge.

The two-party political system that had developed in Japan since the turn of the century came of age after World War I, giving rise to the nickname for the period, "Taishō Democracy," which caused a shift in political power to Japan's Imperial Diet and democratic parties.

After 1918, the Emperor could no longer attend Army or Navy maneuvers, appear at military academy graduation ceremonies, perform annual Shinto ritual ceremonies, or even attend the official opening of sessions of the Diet of Japan.

After 1919, he assumed no official duties, and Crown Prince Hirohito was appointed prince regent on November 25, 1921.

Taishō's reclusive life was not affected by the Great Kantō Earthquake of 1923. Fortunately, he had moved by royal train to his summer palace in Nikko the week before the disaster; but his son, Crown Prince Hirohito, remained at the Imperial Palace, where he was at the center of the event.

Carrier pigeons kept the Emperor informed as information about the extent of the devastation became known.

In early December 1926, it was announced that the emperor had pneumonia. Taisho died of an acute myocardial infarction at 1:25 a.m. on December 25, 1926, at the imperial palace of Hayama, in Sagami, south of Tokyo Bay (in Kanagawa).After his death, he was succeeded by Hirohito.

Taisho was called the first emperor of Tokyo, because he was the first to live all his life in or near the east of the capital. Taisho was born and raised in Kyoto and later, after living and dying in Tokyo, was buried in Tokyo Prefecture.

Family and descendants of Emperor Taishō

Yoshihito's wife had been carefully chosen by Emperor Meiji for her intelligence, good disposition and dignity, to complement Prince Yoshihito in areas where he was handicapped.

Akasaka Palace was built between 1899 and 1909 in the rococo style to serve as the residence of the Imperial Prince. The Prince and Princess had the following children: 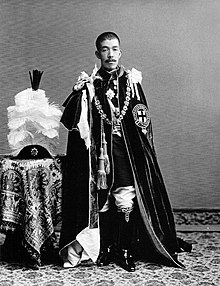