During his reign there was much internal turmoil as a result of Japan's first major contact with the United States, which occurred under Commodore Matthew Perry in 1853 and 1854, and the subsequent forced reopening of Japan to Western nations, ending a 220-year period of national isolation.

His reign would continue to be dominated by insurrection and partisan conflicts that would eventually culminate in the collapse of the Tokugawa shogunate shortly after his death and the Meiji Restoration at the beginning of the reign of his son and successor, the Meiji Emperor.

The emperor's youngest sister, Imperial Princess Kazu-no-Miya Chikako (和宮親子内親王) was given in marriage to the Tokugawa Iemochi shōgun as part of the movement to unite the court and the Bakufu, but the shōgun's death ended the negotiations.

The emperor and his sister were against the marriage, although he realized the benefits to be had from such a family liaison with the true rulers of Japan. Kōmei cared little or nothing for foreign policy.

In fact, he abhorred the changes that were taking place in Japan at the time. He was also opposed to the opening of Japan to Western powers and to the foreign policy and Treaty Harris undertaken by the Tokugawa Shōgun, who increasingly accepted more and more foreign demands.

During his reign he began to gain more power as the Tokugawa Shogunate declined, although this was limited to consultation and other protocol deferences. He died of smallpox at the age of 35. There is a theory that he was poisoned by an anti-Bakufu group.

Prince Osahito was enthroned as Emperor on March 10, 1846 after the death of his father. The succession was considered to have been received by the new monarch; and shortly thereafter, Emperor Kōmei is said to have acceded to the throne.

The years of Kōmei's reign correspond to a period when Tokugawa Ieyoshi, Tokugawa Iesada, Tokugawa Iemochi, and Tokugawa Yoshinobu were leaders at the pinnacle of the Tokugawa shogunate. On July 8, 1853, U.S. Commodore Matthew Perry arrived with his "Black Ships" to force trade with Japan.

The Tokugawa shogunate, which had controlled military and civil affairs in the feudal provinces of Japan for some three centuries, proved unable to meet the new challenge of open trade with the West. At that time, the Kōmei emperor still retained only symbolic power at his court in Kyoto.

As the shogunate, riven by internal disputes, gradually ceded sovereignty to foreign powers under threat of military force, the Kōmei emperor began to assert himself and regain many of the powers that his ancestors had granted to the Tokugawa clan at the end of the Sengoku ("warring states").

Both the Emperor and his sister were against the marriage, even though he realized the gains to be made from such family connections with the real ruler of Japan.

Consultation with the shogunate

On January 22, 1858, Daigaku no kami Hayashi Akira led the bakufu delegation that sought the advice of Emperor Kōmei in deciding how to deal with the newly assertive foreign powers.

This would have been the first time that the Emperor's advice was actively sought since the establishment of the Tokugawa shogunate.

The most easily identifiable consequence of this transitional overture would be the increased number of messengers being transmitted back and forth between Edo and Kyoto over the next decade.

With respect to these difficult imperial audiences in Kyoto, there is no small irony in the fact that the Shogun and his bakufu were represented by a nineteenth-century Neo-Confucian scholar/bureaucrat who would have been surprised to find himself at a crucial nexus of political change management:

movement arguably "by the book" across uncharted waters with well-established theories and history as the only reliable guide.

Hayashi Akira was sent from Edo to Kyoto in October 1858 to explain the terms of the Treaty of Amity and Commerce (日 米 修好 通商 条約, Nichibei Shūkō Tsūshō Jōyaku), also known as the Harris Treaty.

Hayashi's dual task was to explain the terms to a skeptical emperor and to obtain the sovereign's consent. Kōmei finally agreed in February 1859 when he came to understand that there was no alternative.

The pilgrimage of the 14th Shogun Tokugawa Iemochi to Kyoto in 1863 was a turning point not only in nineteenth-century relations between the military bakufu and the Imperial Court, but also in what history would call the Meiji Restoration.

Emperor Kōmei's reception of the Shogun at Kyoto Palace can be seen as a moment when the political realm was completely redefined, becoming a transitional imperial kingdom.

This impression was enforced by Emperor Kōmei's subsequent pilgrimage to the Kamo shrine, with the Shogun in tow. This public demonstration showed that a new order had now emerged in the kingdom.

These treaties were widely regarded by Japanese intellectuals as unequal, having been forced upon Japan through gunboat diplomacy, and as a sign of the West's desire to incorporate Japan into the imperialism that had taken hold of the continent.

Among other measures, they granted Western nations unequivocal control of import tariffs and the right of extraterritoriality to all their visiting citizens. They would remain a sticking point in Japan's relations with the West until the early 20th century.

The "Order to expel the barbarians". 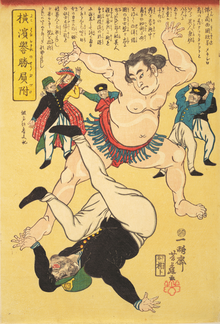 Emperor Kōmei was infuriated by almost all developments during his reign as Emperor, and during his lifetime he never saw any foreigners or knew much about them.

Unequal trade treaties with Western powers, such as the Treaty of Kanagawa and the Treaty of Harris were signed without imperial sanction and despite the Emperor's refusal to approve them.

On two occasions he expressed his willingness to resign in protest. During his reign he began to gain more power as the Tokugawa shogunate declined, although this was limited to consultations and other forms of deference according to protocol.

Emperor Kōmei generally agreed with anti-Western sentiments and, breaking with centuries of imperial tradition, began to take an active role in affairs of state.

As opportunities arose, he fulminated against treaties and attempted to interfere in the shogunal succession. His efforts culminated in 1863 with his "Order to Expel the Barbarians."

Although the Shogunate had no intention of enforcing the order, it inspired attacks against the Shogunate itself and against foreigners in Japan:

the most famous incident was the murder of British merchant Charles Lennox Richardson, for which the Tokugawa government paid compensation of one hundred thousand British pounds.

Other incidents included the bombing of Shimonoseki and Kagoshima, and the destruction of Japanese warships, coastal weapons, and assorted military infrastructure throughout the country.

These incidents showed that Japan could not match the military might of the West at the time, and that confrontation could not be the solution.

In January 1867, the Emperor was diagnosed with smallpox, which caused surprise because Kōmei had supposedly never been ill before.

On January 30, 1867, he suffered a fatal violent attack of vomiting and diarrhea, and had purple spots on his face. Emperor Kōmei's death was clearly convenient for the anti-bakufu forces that Kōmei had consistently opposed.

It was rumored at the time that he was assassinated by Choshu radicals or radical officials at court. British diplomat Sir Ernest Satow wrote, "it is impossible to deny that [Emperor Kōmei's] disappearance from the political scene, leaving a boy of fifteen or sixteen [actually fourteen] as his successor, was most opportune. "

However, there is no evidence for this and it is generally believed that he was simply another victim of what was a pandemic at the time. However, at the time of Emperor Kōmei's death, the government was facing bankruptcy and near collapse. Japan was also surrounded by colonial powers, which were poised to gain considerable influence with major investments in Japanese trade.

Kōmei's son, Imperial Prince Mutsuhito, was crowned as Meiji Emperor on September 12, 1868, and these problems were put to rest under the Meiji Restoration.

After Kōmei's death in 1867, his kami was enshrined in the imperial mausoleum, Nochi no Tsukinowa no Higashi no misasagi (後 月 輪 東山 陵), which is located at Sennyū-ji in Higashiyama-ku, Kyoto.

Emperor Kōmei was the last emperor to receive a posthumously chosen name after his death. Beginning with the reign of his son, Emperor Meiji, posthumous names were chosen in advance, being the same as his reigning names.

Other information of Emperor Kōmei

Kōmei had six children, four daughters and two sons, but the future Emperor Meiji was the only one to survive beyond the age of four.

Emperor Kōmei was the last emperor to be given a posthumously chosen name after his death. Beginning with the Meiji emperor, posthumous names were chosen in advance, being the same ones that coincided with his reigns.

Eras of his reign

In addition, Emperor Kōmei was the last Japanese emperor to have multiple era names (nengō) during a single period of rule. Beginning with his successor Meiji, a single era name (identical to the emperor's official title) was chosen and would not be changed until his death. There were seven eras during his reign: