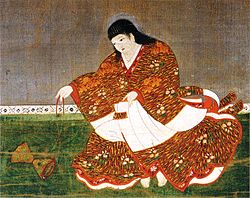 However, this accession to power was contested by Mochihito, son of the deposed emperor Go-Shirakawa, and the empire plunged into a civil war called the Genpei War in June 1180.

The year of his coronation, the capital was moved to Fukuhara (now Kobe), on pressure from Kiyomori, but was soon moved back to Kyoto.

In 1183, when Minamoto no Yoshinaka took the capital, the Taira clan fled with the young emperor, who abdicated in favor of Go-Toba, and the Three Sacred Treasures were taken to Yashima (today Takamatsu).

Defeated by Minamoto no Yoshitsune at the battle of Yashima in March 1185, they fled again to the west, but were definitively defeated on April 25 at the decisive naval battle of Dan-no-ura.

Many of the defeated committed suicide by throwing themselves into the sea, including the young Antoku in the arms of his grandmother Taira no Tokiko, the widow of Kiyomori.

According to Mitsuo Kure, "some see the death of these well-bred and cultured nobles as a symbol of the end of one era and the beginning of another: that of the samurai lords.

According to tradition, the sacred jewels, the magatama and the sacred sword Kusanagi, two of the three sacred treasures of Japan, sank to the bottom of the sea with the emperor, and although the jewels were found, the sword was lost.

Tokuko, Antoku's mother, also threw herself into the water, but was rescued (according to the Heike monogatari, she was pulled by the hair with a rake) and made prisoner. She then became a Buddhist nun in Kyoto.

After her drowning, in order to mourn the Bodhi, the Amidaji Goeidō was built. Later, Antoku was buried in the Kurume-Suitengu in Kurume, in present-day Fukuoka Prefecture, and was then worshipped everywhere as Mizu-no-kami (水の神, lit. "water god" or "god of water"), the god of easy deliverance in Suitengū.

With the establishment of Shintoism as the state religion in Japan, Amida was abandoned and the Akama shrine was established in Shimonoseki to celebrate Antoku.

The story of Emperor Antoku and his mother's family became the subject of the epic novel known as Heike monogatari (The Tale of the Heike).

Emperor Antoku Eras of his reign